The man who scuttles man’s superiority over beetles

Jan Fabre, the Belgian artist whose monumental sculptures are enlivening three of Florence’s most august public spaces this summer, is a modern Renaissance man. As well as a visual artist with over 100 one-person shows to his name since 1979, he is an actor, writer, choreographer, theatre designer, stage director and filmmaker. That may account for the rapport Fabre feels with the Italian love of detail and improvisation. But perhaps his strongest affinity with Italy is his quest for the perfect human image. Fabre regards himself as a “warrior for beauty”. 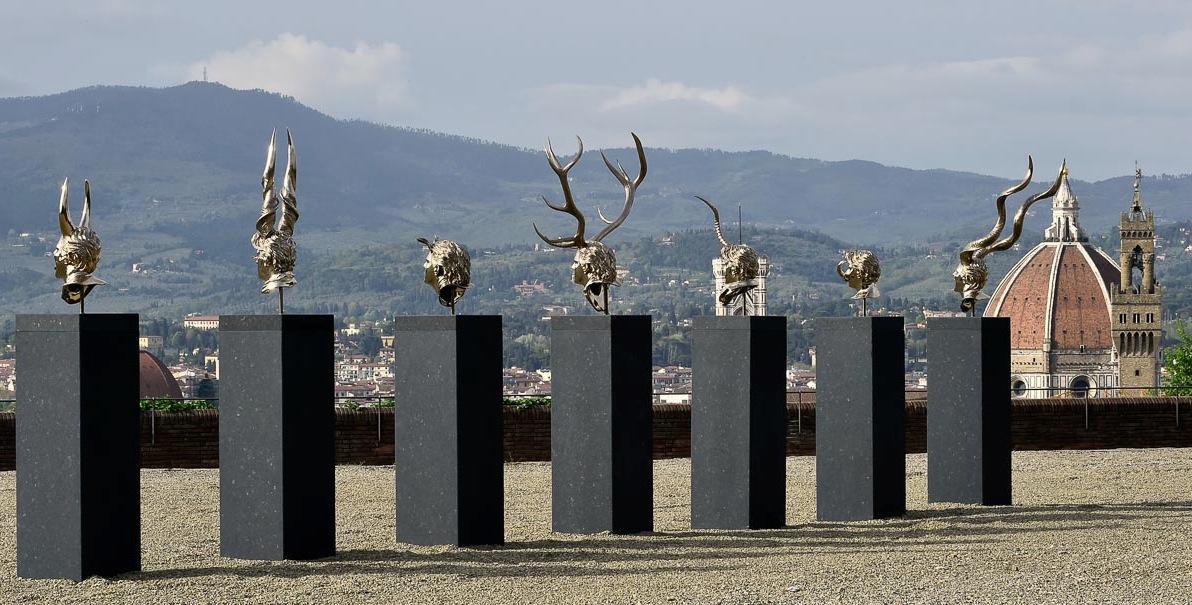 Piazza della Signoria is no stranger to exotic pageants. The Medici staged lavish pageants to celebrate carnival, and in 1541, Cosimo I went as far as to arrange a caccia (a battle between animals) in the square that involved a lion, two bulls and a number of dogs. The animals refused to fight.

With that colourful history in mind, the arrival of a giant bronze turtle does not seem out of place. Indeed, the two-piece cavalcade of reptile and rider, called Searching for Utopia (2003), fits effortlessly into its extraordinary setting. Gleaming gold in the sun, the sculpture captures the spirit of the restless piazza—from the ancient myths depicted in marble in the Loggia dei Lanzi to the excitement and aspirations of the shifting crowds—and amplifies it. 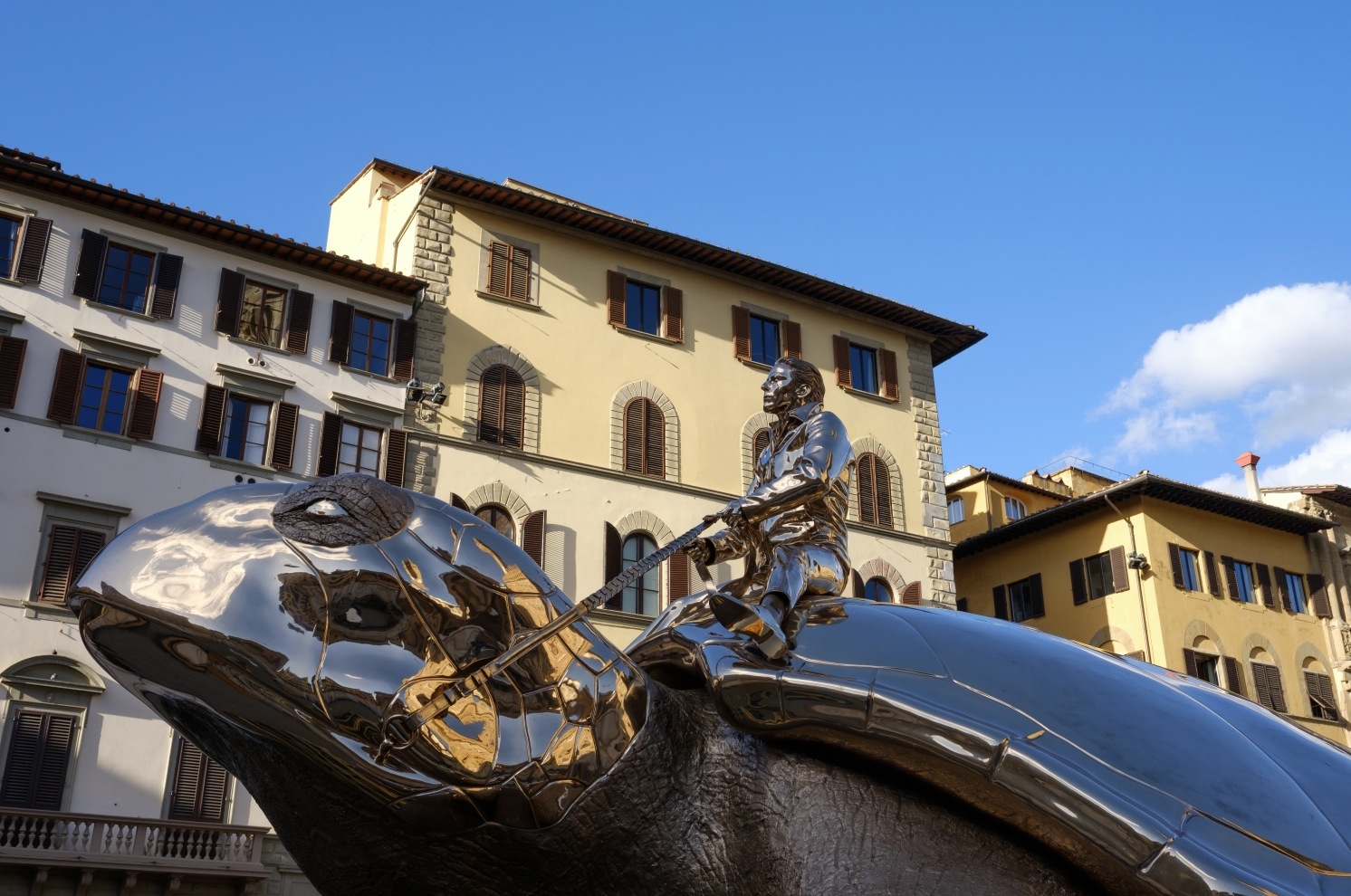 In this spectacular location, Fabre shows off his affinity with the stage. Not only does his work mingle with Donatello and Michelangelo, copies of whose masterpieces stand outside Palazzo Vecchio, he also trumps a famous countryman. His gigantic creature eclipses Cosimo’s equestrian statue by the High Renaissance master Giambologna, a fellow Fleming.

After all, the artistic imagination invariably reaches beyond its grasp. The figure standing precariously on a stepladder outside Palazzo Vecchio represents the misunderstood contemporary artist. With his arms upstretched to hold a ruler against the sky, the Man who measures the Clouds (1996) rises above the heads of the public with his impossible plan. In the process, he makes new and unanticipated connections. 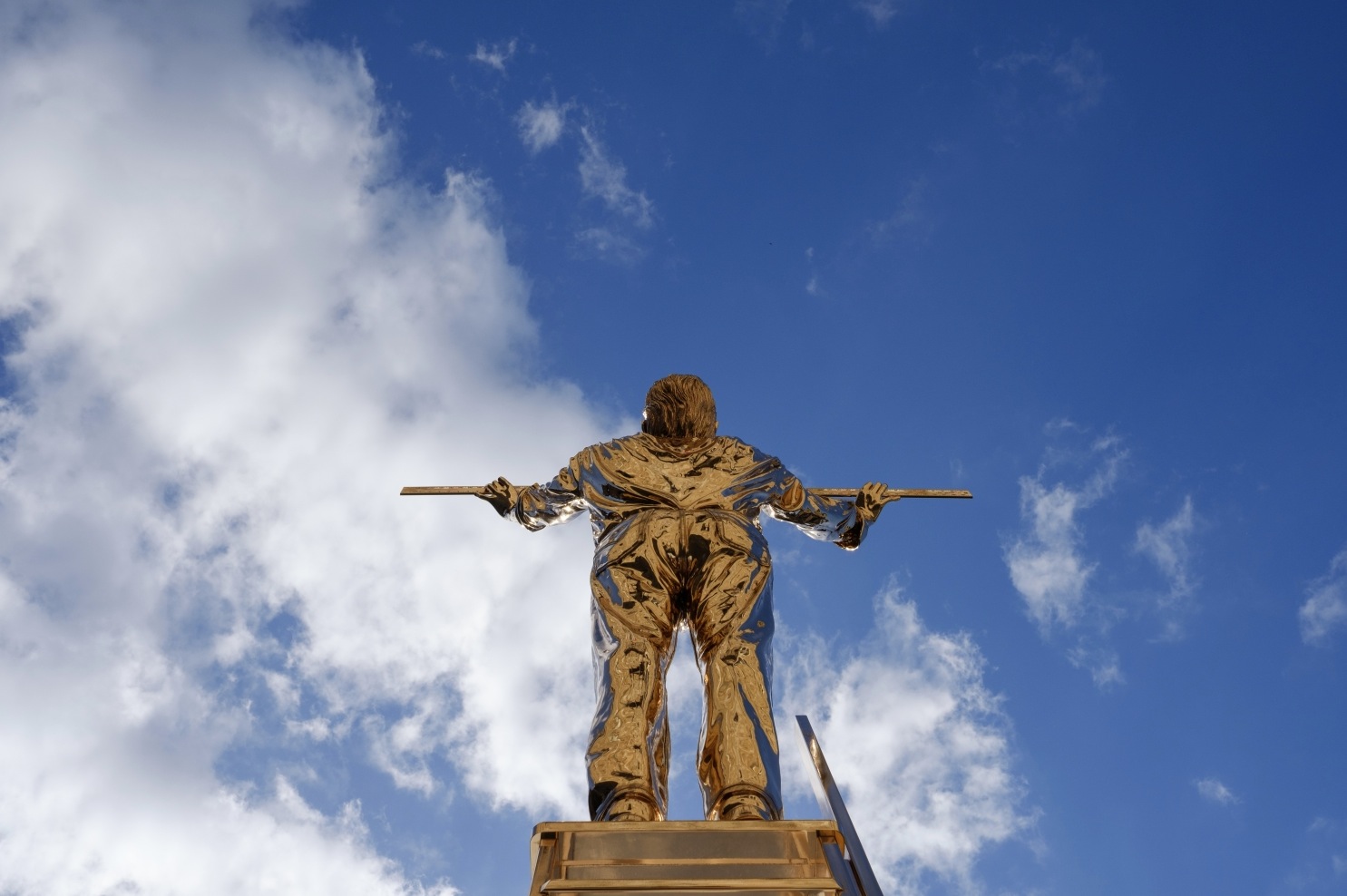 Crosscurrents between past and present, allegory and reality, beauty and imperfection run through Fabre’s work. Like the Old Masters, he tackles the weighty themes of life, memory and death. His materials, however, are unusual. The palazzo’s interior appears in the grip of an alarming infestation. The surfaces of a ceremonial sword, a fragment of armour and, most impressively, a huge globe disappear beneath a dense coating of iridescent jewel beetles. Their bodies point this way and that as if only momentarily stilled from shifting urgently round the embedded mass.

But they are dead. Fabre, who obtains supplies from the Far East where the non-protected species is eaten and the shells thrown away, has used the shells for decades. His projects are invariably major endeavours, involving teams of assistants in many months of labour to create installations. On one occasion a grand ceiling in the Royal Palace in Brussels was filled with the shiny coloured carapaces at the request of Belgium’s Tuscan-born Queen Paola. 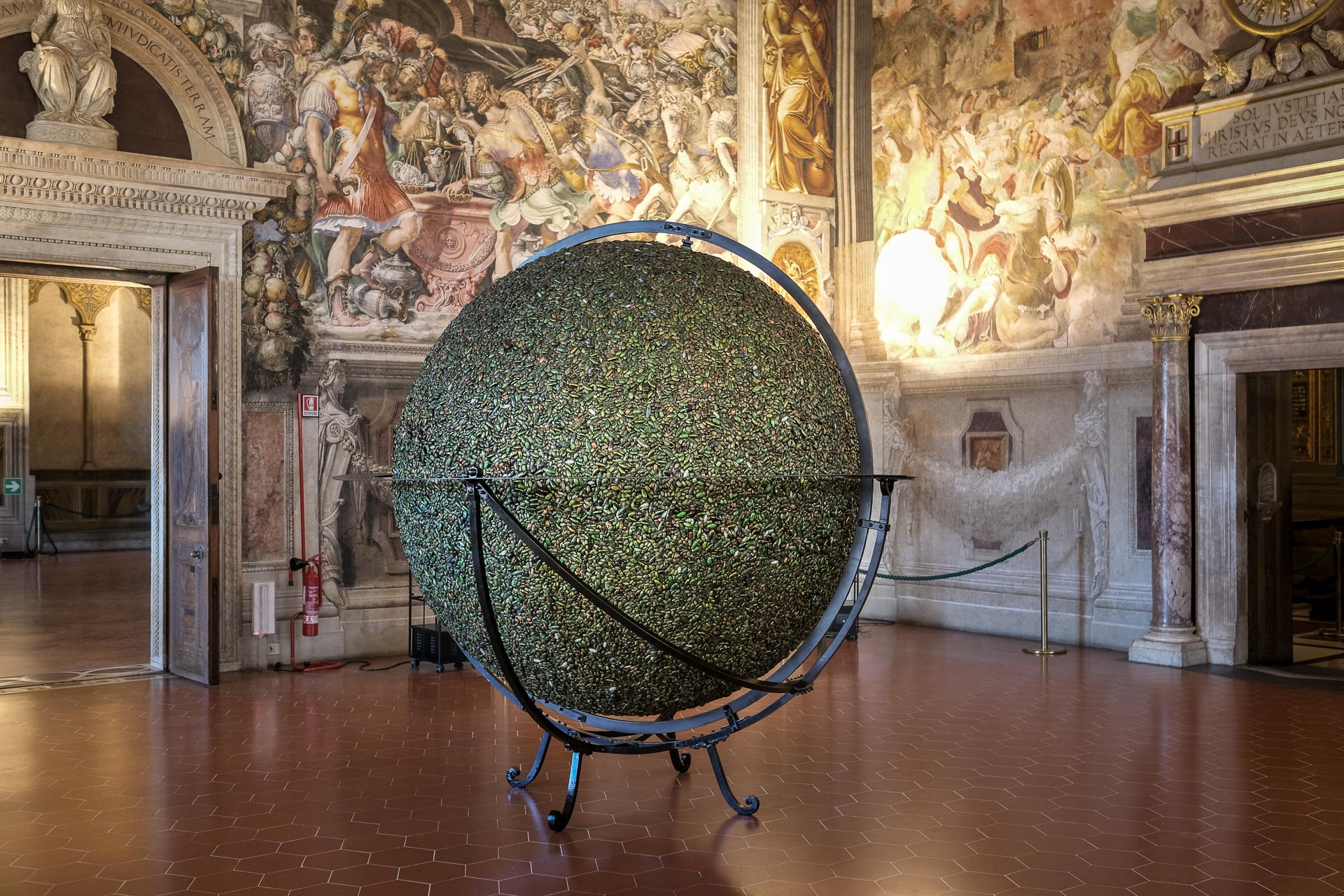 Fabre’s interest in insects goes back to childhood. “Like any little boy, I took spiders from the earth and pulled out their legs to discover how they worked.” Later he accompanied his father on drawing trips to the natural history museum. The family owned an insect collection and his great-grandfather was a distinguished entomologist.

But the symbolism reaches deeper. Fabre is inspired by the beetle’s infinite adaptability to changing environments; it has ensured its survival for millions of years. Insects are more successful organisms than human beings and technologists study their behaviour. “They possess information; they have the greatest memory. These creatures can be understood as the oldest computers.”

That memory, the core of their durability, now colonises the palazzo, a repository of its own momentous memories spanning generations. Coated objects resemble precious medieval reliquaries, an association that resonates with their surroundings in the richly decorated Sala delle Udienze and two ornately frescoed chambers.

Fabre blends these historical references with modern concepts. The ancient Egyptians valued the scarab as a fertile emblem of the heavenly cycle of death and regeneration, By recycling beetle shells—among the hardest, lightest substances on earth—Fabre redirects the symbol towards contemporary society’s preoccupation with consumption and obsolescence. How far will this attitude extend? To the extinction of the human race? 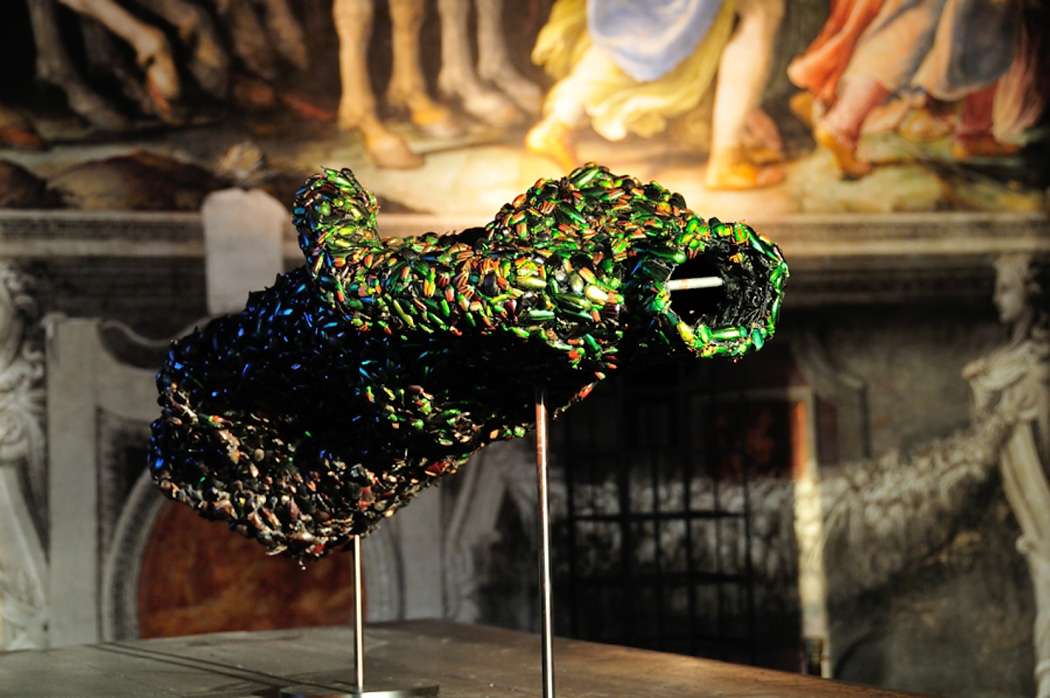 That idea may seem far-fetched and their morbid overtones is one criticism of Fabre’s elaborate creations. A striking example is the macabre combination of a shell-encrusted skull with a red squirrel gripped in its jaw.

But implicit in Fabre’s elegiac mood are searching observations of art and life. They are well made through contrasting images at the Forte di Belvedere, the third venue of this mini-retrospective of the artist’s career, which, as well as hosting sculptures on the expansive terraces overlooking Florence, has opened its rarely visited interior to the show.

Among the bronze pieces installed in a sequence of small rooms is a dissected scarab and a beetle with the strength to carry a laurel tree on its back. Outside, silhouetted against the city, a giant beetle supports a tall upright, scroll-handled walking stick, the sturdy prop for ailing mankind.

These individuals appear to be the spiritual guards of the show’s title. Contrast their strength with the specimens of unstable, insecure humanity Fabre places at lofty points against the skyline. There is the Man who cries and laughs (2005), the Man who conducts the stars (2015) and another who sits fully-clothed in one of seven bathtubs, absorbed in writing on water. And reappearing in a hazardous position above a rampart is the impractical dreamer, the fellow intent on measuring the clouds.

In his extravagant fashion, Fabre highlights two troubling disconnections that have widened in recent centuries—between the human and natural worlds and (a newer phenomenon) between art and science. Fabre provokes a thought and an omen: reunite and flourish, or drift apart and experience the slow fate of the skull and the squirrel. Both eventually perished.