Art beneath an arched brow

Ralph Rugoff, the US curator behind the centrepiece exhibition at this year’s Venice Biennale, believes in the potential of art.

“An exhibition,” he declares, “should open people’s eyes to previously unconsidered ways of being in the world and thus change their view of that world.” To that end, he has brought together 83 artists from across the globe and, if the visitor total for the last Biennale is a guide, there will be over 600,000 minds to open to new ideas (a third of them young people’s) until the world’s biggest art event closes in November.

What is the Venice Biennale?

It is a huge international trade show for the contemporary visual arts. It is not about selling art—although that happens—but for nurturing reputations and, from time to time, for blowing minds wide open. While every continent now hosts a slew of annuals, biennials, triennials and the occasional quinquennial, Venice remains the mother of them all. It has reached its 58th edition and, while it has spread to every corner of this magical city, the show has never overwhelmed it. Venice always wins.

This year’s bash follows an established pattern. The action is split between three huge venues. The first is the Giardini, the park in the city’s east where dusty paths connect the national pavilions, a parking lot of architectural styles where dozens of individual exhibitions vie for attention among the cafés and cooling umbrellas. The biggest pavilion contains the first part of the main exhibition, this year called May You Live in Interesting Times. The phrase is borrowed from the Chinese curse about disorder that is famously neither Chinese nor a curse, but a Victorian British piece of splendid misattribution. And one of the most withering responses in any Briton’s vocabulary is, of course, to say “interesting”.

Risking that reply, the show spreads into the second venue. The Arsenale is no less enormous. In the former naval shipyard, artworks in every conceivable media from painting, sculpture and drawing to photography, film and beyond are presented in one continuous space, subdivided into smaller sections throughout its wide, lofty and generally dark interior that stretches for over 300 metres.

The most mesmerising, however, is at Fondazione Querini Stampalia. Polish artist Roman Opałka began his Détails in 1965 by painting the number 1 in the top left corner of a blank canvas. He carried on painting and counting, and when he died, 46 years later, he had reached number 5,607,249. The first and last (unfinished) painting in that obsessive series are presented here—imagine what came in between.

With each Biennale, a jury awards prizes to artists and pavilions, for while the format and layout are much the same, the content is always different. The consensus this year veers towards a good experience—not great, but definitely good—hence making this Biennale a better extravaganza than usual.

The pavilions, by and large, merit attention. The award for best national pavilion went to Lithuania for its indoor beach. Called Sun and Sea (Marina), the installation presents bathers of different ages and dimensions on the artificially lit sand, playing chess, reading, strolling and singing (in English). This “opera-performance” occupies a building in the Arsenale’s military zone and puts the viewer on guard with its message of the approaching eco-drama. Lyrics cite Chinese sweatshops making swimsuits, the Great Barrier Reef blanched to destruction and how winters lately have been unusually hot. In its quayside location, the whole show is at risk from rising sea levels.

Missing out on the top prize, France’s contribution is just as strong. The artist Laure Prouvost presents her image of “Frenchness” as an ark for all communities, animals and things. (Prouvost has lived for years in London and Antwerp, so she may take an outsider’s view.) Visitors are immersed in space, light, things, drawings, cigarette butts and a perceptible feeling of togetherness. Rather than coming through the pavilion’s front entrance, visitors enter through a rear doorway and climb a set of rickety wooden stairs as if that will change perspectives. Spaces melt aquatically into an ocean-like environment with the film Deep See Blue Surrounding You at the centre of a dreamlike road trip that takes visitors from the Paris suburbs to Venice by car, horse and boat.

Italy’s pavilion is, sadly, one of the year’s clunkers, but time is well spent with Belgians Jos de Gruyter and Harald Thys, whose mechanised canine puppets provide an absurd perspective on social relations in the current populist epoch. At the US pavilion, Martin Puryear’s eight non-figurative sculptures, beautifully crafted in pine and steel, have the theme of liberty and its absence. The best is his A Column for Sally Hemings, in wood weighed down by iron that commemorates the enslaved woman of mixed race by whom her owner Thomas Jefferson had several children. 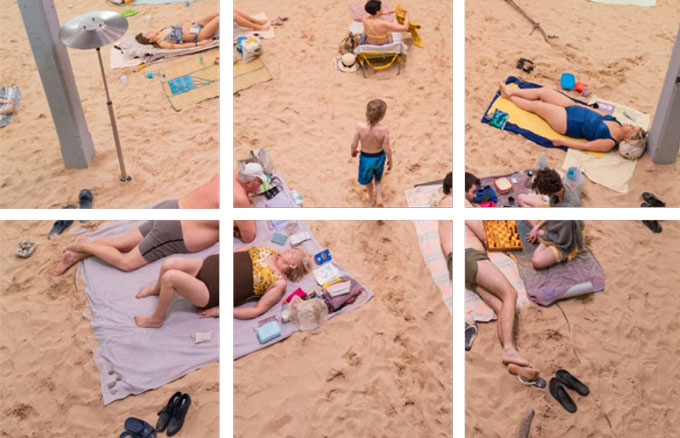 Rugoff’s international exhibition sees more well-known artists than curators usually gather—and they are all alive, another departure from practice. There is Julie Mehretu and Danh Vō, Jimmie Durham and Carol Bove, Christian Marclay and Ed Atkins. All are strong, although perhaps among the best are American Nicole Eisenman’s paintings, whose characters are engaged in activities that appear strange or absurd, but suggest familiar psychological states.

The main show has its prize winners, too, with the Golden Lion going to US artist Arthur Jafa. His film The White Album is a half-hour collage of appropriated music videos, security-camera and mobile footage, Internet clips and details from documentaries that reflect on American history and whiteness. A capricious mix of public malevolence and private warmth, it moves with a vibrant rhythm into the debate about race and power.

Rugoff, an American who heads London’s Hayward Gallery, wonders if “perhaps art can be a kind of guide for how to live and think in interesting times”. Those times encompass eco-anxiety and political populism, Brexit and the social media boom, rogue states and mass migration. So, let’s play. As Rugoff concludes, “it is when we play that we are most fully ‘human’”.

The 58th International Art Exhibition of La Biennale di Venezia is on until November 24.