Christmas in Florence is a magical time of the year when elegant lights illuminate the cobblestone streets, trees take centre stage in city squares and nativity scenes emphasize the essence of the holiday season. This is The Florentine’s guide to Christmas 2019 in Florence. 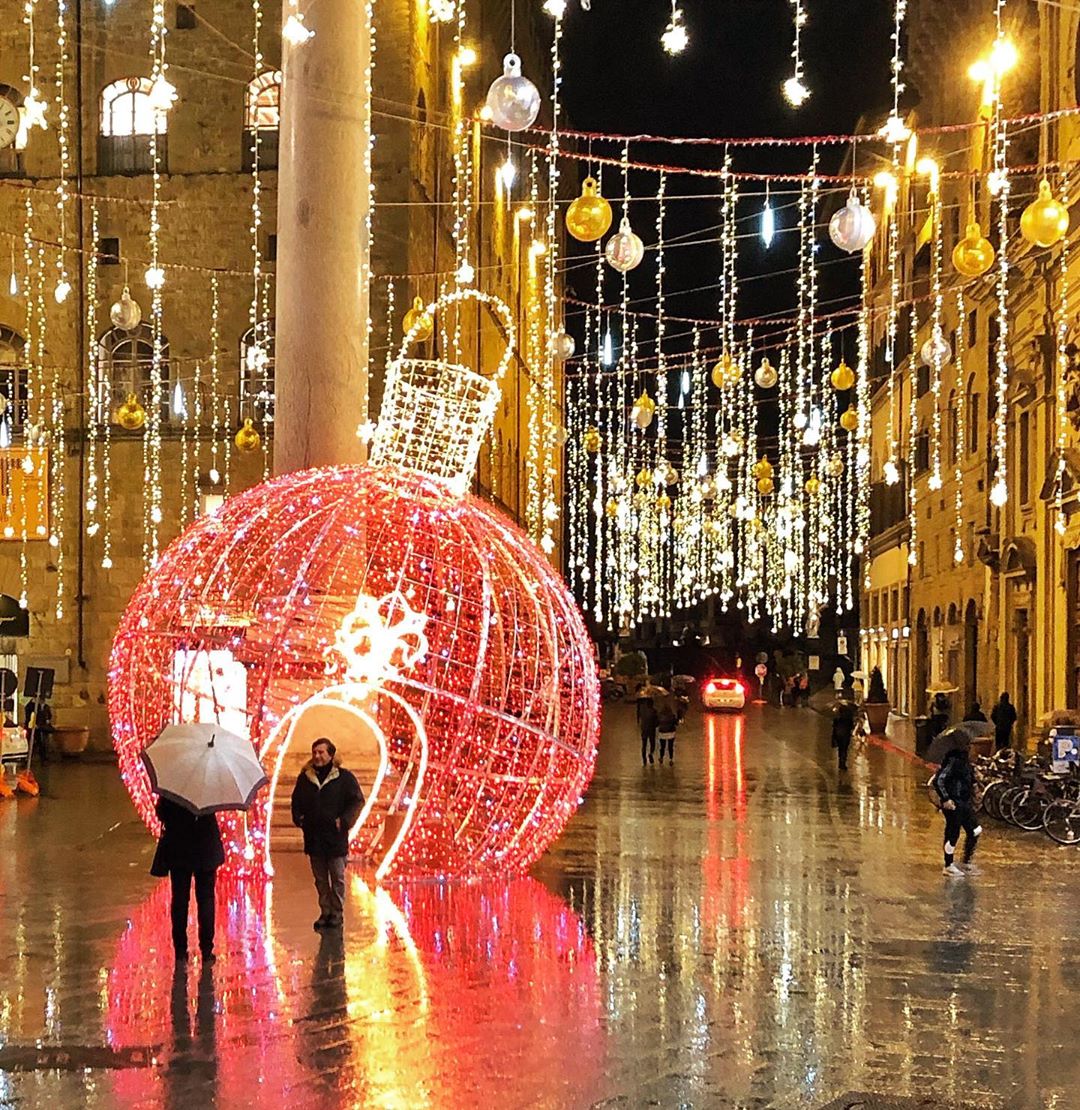 This year’s lights along Via Tornabuoni / ph. @marcobadiani

They’ve already been Instagrammed all over the show: via de’ Tornabuoni was the first of Florence’s streets to switch on the Christmas lights according to the thoroughfare’s full-on opulence. The 16th-century Mercato del Porcellino quickly followed suit with lights displaying the city’s emblem, the lily. The length of via dei Calzaiuoli is lit up with starry baubles and via del Corso dangles baubles that resemble Christmas puddings.

The popular F-Light Festival returns from December 8 to January 6 with a focus on the Moon marking 50 years since NASA’s successful Apollo 11 mission in 1969 with the Ponte Vecchio and other monuments used as a backdrop for spectacular light show with the artistic direction of Sergio Risaliti.

On December 7, at 6.30pm, the Mercato Centrale will switch on its creative Christmas lights. Expect some saxophone action by Quartetto Cherubini and rousing songs by the One Voice Gospel Choir. 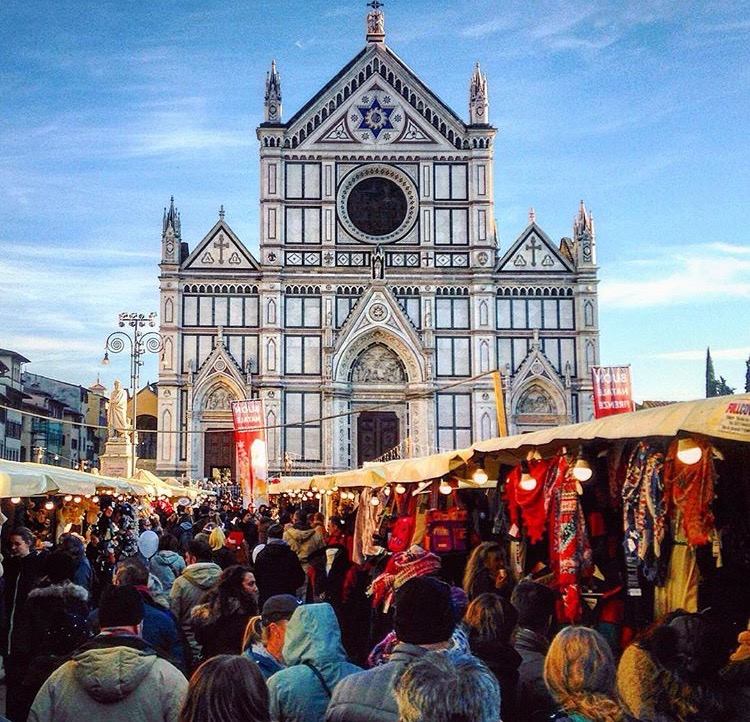 Smile Project Onlus host a charity market from November 22 to 24 at the Tepidarium del Roster (via Bolognese 17, Florence). Clothing, accessories and unique Christmas gifts, all in aid of social development for Eritrea.

Strudel and stinco galore, the Weihnachtsmarkt “German” Christmas Market is on in piazza Santa Croce until December 22.

The AILO Christmas Bazaar returns to the Tepidarium in the Giardino dell’Orticoltura this year on November 30 (3-6pm) and December 1 (10am-6pm). Expect vintage clothes, books in Italian and English, handmade objects and Christmas decorations, plus the lottery and a silent auction where you can bid for prizes from city stores, top wineries and restaurants. There’ll also be the usual international treats, such as the famous AILO brownies and other delicious cakes.

The British Institute of Florence is hosting a Christmas Fair on December 6. Books, handmade gifts, homemade goods, refreshments and library gift vouchers on sale in the Harold Acton Library. Join the raffle and you could win a Christmas at Highgrove Fortnum & Mason hamper, a beautiful handmade box by Ann Hepper or a special Capponi wine. Entrance to the fair is from lungarno Guicciardini 15.

Spazio Natale Emergency 2019 is a charity Christmas market being held at Galleria Artedove (via de’ Macci 81R) every day from December 1 to 24 from 10am to 7.30pm (December 24, 10am-4pm). Volunteers welcome: click here to find out how you can help.

The Creative MANI-Factory market is being held at B9 – Manifattura Tabacchi (via delle Cascine 33-35) on December 7 and 8 (10am-8pm) to showcase emerging traditional and digital designers, illustrators and artisans.

On November 20 and December 1, check out the Women in Charge Christmas Bazaar (Saturday: 10:30am-9:30pm; Sunday: 10:30am-8pm) at Tasso Hostel (via Villani 15, Florence) showcasing handmade items by women designers and artisans. There’s even a free babysitting service: children are encouraged to write letters to Father Christmas.

On December 14, enjoy Christmas in the Wine Cellar at Ruffino’s flagship winery Poggio Casciano (via Poggio al Mandorlo 1, Loc. Quarate, Bagno a Ripoli / 055 6499712), just 25 minutes from Florence. From 11am to 7pm, stock up on discounted wines for the festive season as well as local produce and special gift ideas. Fun and games for children.

Every December, the Four Seasons Florence embraces the city with its Open Day. On December 15, 10am-4pm, your 1 euro door donation (entrance from via Gino Capponi 54, borgo Pinti 97 and piazzale Donatello 12) allows you a glimpse of luxury while making a difference: all monies will go to the recently founded Patrizio Cipollini Foundation, named after the hotel’s former general manager who passed away this year, which will fund study grants for young people at Barga’s catering college. Get into the Christmas spirit while sampling culinary delights from Florence’s finest restaurants, swaying to gospel music and picking up a few holiday gifts. 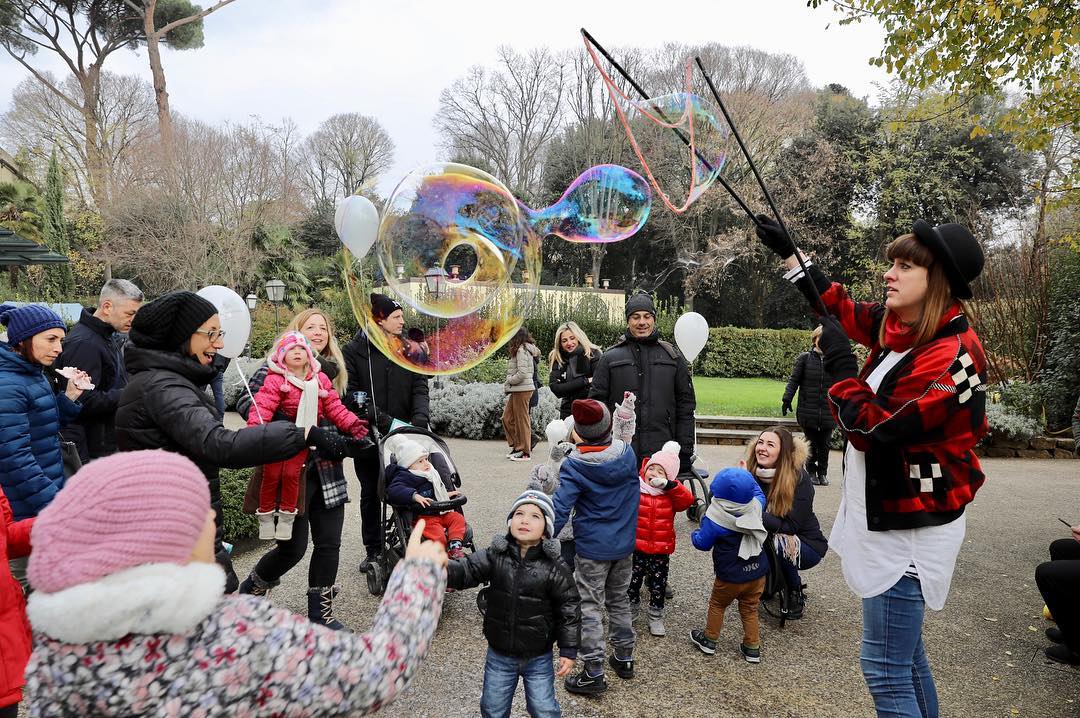 The Italian Red Cross Christmas Market takes place from November 29 to December 1, 10am- 6.30pm (3-6.30pm on November 30) at Palazzo Capponi (borgo San Frediano 12). All monies will go to needy families in the Florence area. Expect vintage and designer labels as well as toys and jewellery.

Nataleperfile, the popular Christmas market at Palazzo Corsini (lungarno Corsini 8), returns from December 6 to 8, 10am-7pm. Check out the vintage room, food and wine corner in the palazzo’s extraordinary grotto, and vouchers donated by the best restaurants in the city. The Nataleperfile panettoni and pandori are lovingly wrapped by volunteers and always prove a treat for friends and family. Monies go to the FILE – Fondazione Italiana di Leniterapia. 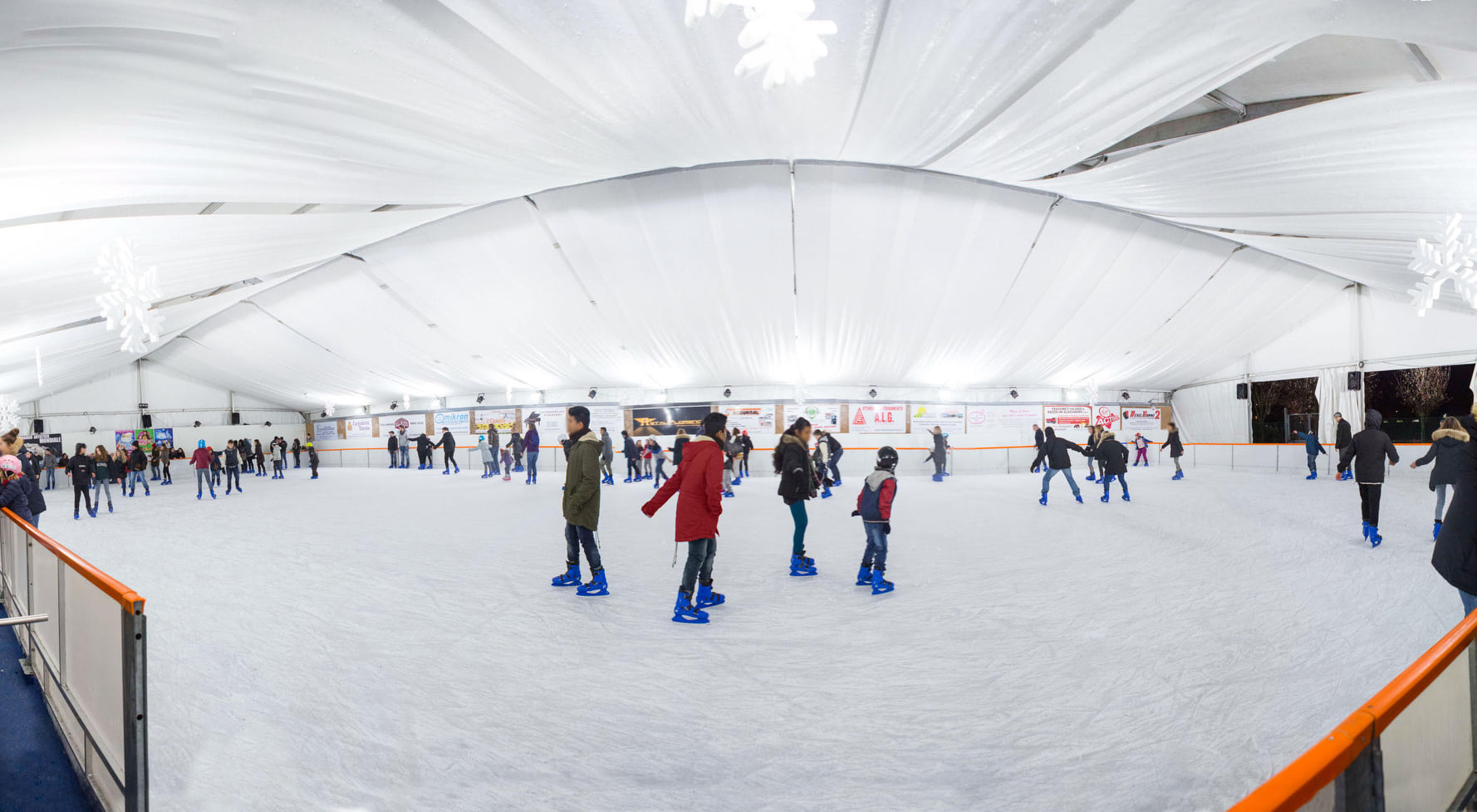 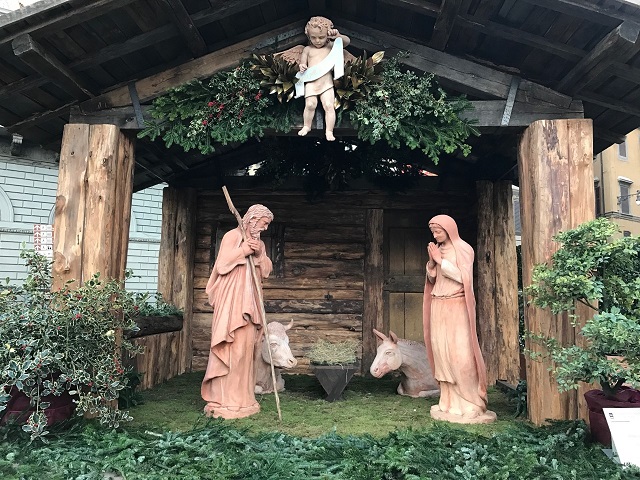 From December 8 to January 6, the life-size nativity scene returns to the cathedral steps featuring terracotta statues made by artisans in Impruneta. On January 6, the figures are replaced by people and animals to recreate the three kings story around the streets of Florence: the Cavalcata of the Magi begins in piazza Pitti at 2pm, reaching piazza Duomo at 3.30pm.

From December 8 to January 6, Modena-born artist Carlo Ladurini’s 30 contemporary nativity scenes return to Rivoli Boutique Hotel (via della Scala 33, Florence) for the eighth consecutive year. This year’s scenes focus on the Ponte Morandi bridge collapse in Genoa, in which 43 people lost their lives and over 600 were left homeless. Entrance is free; donations welcome (proceeds go to children’s charity Tommasino Bacciotti Foundation). Open from 11am to 11pm daily.

The Children’s Lending Library at St. James Church, via dei Rucellai 9 will host ‘Dr Giacomino’s Tiny Bookshop’ by Franco Travoglio and Marco Davide Bellucci on December 14. Santa will make his annual visit too! Suitable for children above the age of 5. Baked goods, toys and books will be on sale. Open to members of the library, or non-members can enter by paying 3 euro. Seating is limited so reserve by emailing childrenslendinglibrary@gmail.com. 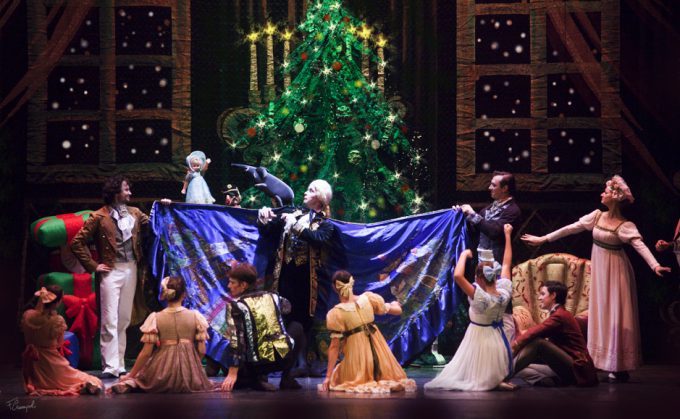 The Nutcracker by Saint Petersburg Ballet

The popular Saint Petersburg Ballet returns to Florence’s magnificent Teatro della Pergola this winter with performances of Tchaikovsky’s Swan Lake on November 25 and The Nutcracker on December 21.

On December 10, at 6:30pm, world-class concert pianist Angela Hewitt and Booker Prize-winning novelist Julian Barnes will give a special fundraising concert at the British Institute. Minimum requested donation: 50 euro (includes a raffle ticket, which will be drawn on the night.

Cinema and Christmas are a match made in heaven. From December 18 to 26, munch on popcorn while watching the highly anticipated Star Wars: The Rise of Skywalker at Odeon Firenze Cinehall (piazza Strozzi, Florence / 055 295051).

Attend the charity Christmas concert on December 8 (8:30pm) at Ognissanti Church (borgo Ognissanti, 42, Florence), with all donations going to the Tumours in Tuscany Association.

St. James Episcopal Church invite everyone to their 6pm Christmas Eve Service, particularly those with children as there will be a special no-rehearsal Christmas pageant in which traditional carols will be sung. No pressure and no preparation needed, props will be given to add to the fun. For those wishing to be involved, please arrive by 5.30pm for a chance to be an Angel, Shepherd, Sheep, Magi, or a member of the Holy Family. There will be a toast with light refreshments afterwards. The other festive services are Advent Lessons and Carols on December 15 at 11am, Midnight Mass at 11pm and Christmas Day Mass, December 25 at 11am.  Contact: 055 294417. 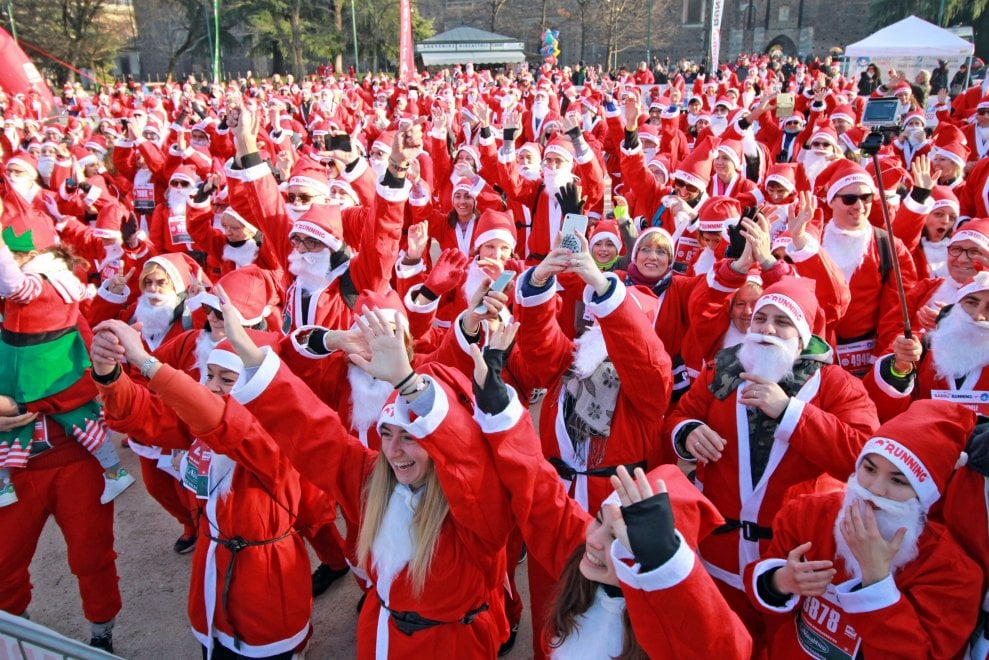