In the days running up to Christmas, many patisseries and bakeries around Florence display a Yule log or, as the French call it, bûche de Noël, in their windows. This delicious cake is usually a sponge baked in a large, shallow Swiss roll tin and, when cooked, rolled into a cylinder shape with a layer of jam or cream inside it. Covered with a rich chocolate icing often made to look like bark, it is sometimes flavoured with coffee or liqueur and adorned with red berries. An offshoot of cake juts out on one side in the form of a small, broken branch with white icing sugar scattered around the log to emulate snow.

The origins of the Yule log stretch back to pagan times, but in the beginning instead of a cake it was the real thing, a huge log of wood that burned in family hearths to mark the winter solstice throughout Europe, but particularly in Germany, Switzerland, France and Italy. The word Yule comes from the Old Norse word jól, a pagan winter feast lasting 12 days in honour of Odin, the one-eyed god of wisdom, poetry, death, divination and magic. Although mentioned in the eighth century by the English monk Bede, the word Yule did not specifically come to denote Christmas until the beginning of the tenth century. In the Christian tradition, the log symbolises the twigs the shepherds burned to keep the baby Jesus warm and the fire, the redemption of Christ. 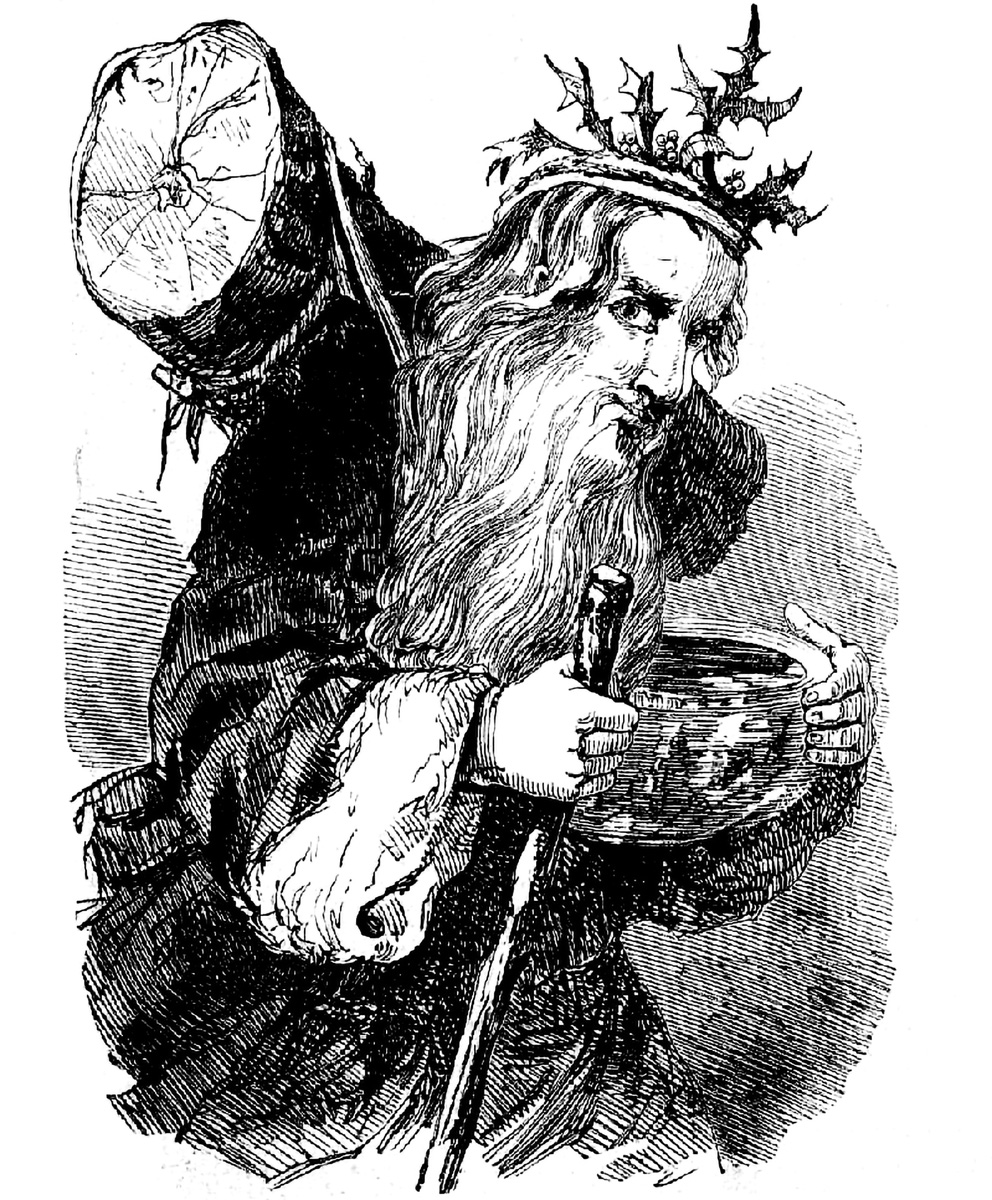 In 18th-century Tuscany, the log was sometimes impersonated by a large masked man with a huge head full of thick, ruffled hair.

Considered a good luck omen for the coming year, the wooden Yule log was known in Italy as the ceppo di Natale or, in Tuscany, the ciocco, especially in Val di Chiana. It was lit on Christmas Eve and left to burn through Boxing Day or, in some cases, if it was big enough until the Epiphany, on January 6. The block of wood was chosen carefully and was usually the piece where the roots of the tree fused into the trunk, representing the union of the earth and the sky, as well as the unity of the family.

Rituals and superstitions regarding the Yule log varied from place to place and, where it is still the custom, still do. However, in the past, when most homes had fireplaces, whether those belonging to peasant farmers or the aristocracy, the Yule log was blessed, decorated with candles, sprinkled with wine or milk, or covered in oil, honey or butter, and was set ablaze by the head of the family. In some areas, the log was covered with material, charms, tassels and garlands, and the puppet of a human figure was added on top. Sitting on top of the log before it was lit, this marionette brought gifts like candy, fruit or toys for the children or they dropped from the chimney. Before receiving their presents, the children would be blindfolded and say a prayer called the Hail Mary of the Log, which recited:

The Angel replied to me

In 18th-century Tuscany, yet another ritual was common. The log was sometimes impersonated by a large masked man with a huge head full of thick, ruffled hair. When the children hit him with small sticks, candy and gifts would fall from his clothes, not unlike fruit falling from a tree.

Over time, to simplify the gift giving, a stylized wooden pyramid was positioned on top of the log. It had framed shelves, which would be larger or smaller according to the wealth of the family. These were decorated and loaded with gifts. Instead, another custom in some rural localities involved a straw-filled rag doll carrying a large empty basket, which was lowered past the window on a rope and left out in the dark until there was a loud knock on the door during dinner. Everyone would call out “Who’s there?” and be told “The log”. The door would be opened and the rag doll pulled inside with its basket now full of presents, to the delight of all the children.

Local superstitions grew up around the log, especially in the countryside. Some believed that all their dreams would come true if they slept near the log. Others thought that by putting an unburned fragment of the log under their beds, their houses would be protected from evil spirits. The ashes too were kept after the celebrations. They were credited with magic properties, which would favour the harvest, keep the livestock safe, increase the fertility of the women and animals, bring good health and provide protection against lightning. Often unburned pieces of the wood were kept to be reused in lighting the new log the following year.

Oratory of San Niccolò del Ceppo, in via de’ Pandolfini

In Florence, just before Christmas, there was a market selling the wooden logs as well as sweets, gifts and different objects for decorating the logs under the Loggia del Porcellino. Also, recently reopened after 22 years of restoration, the oratory of San Niccolò del Ceppo in via de’ Pandolfini took its name from the hollowed-out log where the faithful left money for the poor. The Company of San Niccolò del Ceppo was instituted 600 years ago—Fra Angelico’s Crucifixion with Saints Nicola and Francis (circa 1430) hangs amongst other artistic treasures in the oratory’s sacristy.

Old Yule log traditions and ceremonies have diminished since central heating replaced open fires in many households. Nonetheless, with a Yule log cake on your Christmas table, the echo of those traditions remains alive that, for the future, heralds good things to come.