On September 12, iconic wines from the cellar of Florence’s three Michelin star restaurant Enoteca Pinchiorri raised over three million pounds in the first European auction in London held via livestream by Zachys.

The sale included Coche-Dury, Rouget, Dujac, Ramonet, Leflaive, Jayer, Liger-Belair, DRC, the First Growths, Pétrus back to the 1920s, Le Pin, Yquem back to the 1920s, Masseto, Ornellaia, Krug, Chave and a collection of Italian aquavit in hand-blown Murano glass, all curated by the restaurant’s owner Giorgio Pinchiorri.

In an extraordinary success, the auction was 100 per cent sold and realized £3,153,952. The auction was live-streamed from Zachys’ home office in New York, while bidders logged in from home, along with intimate get-togethers in Stockholm, Geneva, Beijing and at Cabotte Wine Bar and Restaurant in London. Bidders from 20 countries, including the UK, US, UAE, China, Hong Kong, Israel, Switzerland, Sweden and Monaco, all vied to take home a piece of vinous history. The 864-lot auction featured 2,507 large formats including nebuchadnezzars, methuselahs, jeroboams, magnums and bottles. 226 of the lots set new World Records, which included a single magnum of 1979 Jayer Richebourg for £47,120; a single magnum of 1990 Roumier Musigny for £47,120; a single imperial of 2009 Pétrus for £42,160; a single bottle of 1985 Jayer Richebourg for £34,720; and a single methuselah of 1981 DRC RSV for £29,760. 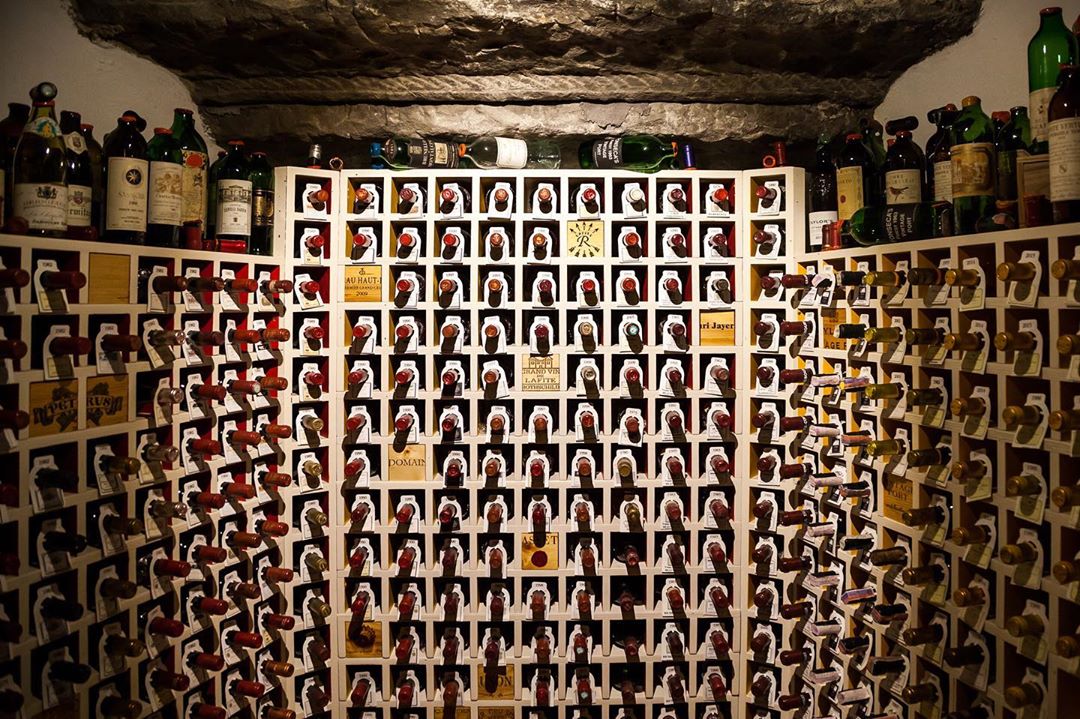 The iconic cellar at Enoteca Pinchiorri

“We can blame Covid for many things, but not for everything,” Giorgio Pinchiorri is reported to have said in an article published in the Italian food and wine magazine, Gambero Rosso. “A wine auction such as this, one of the most important ever organized, requires months and months of planning, just to understand which wines to choose, how many bottles and the bidding price. At the start of 2019, we decided to go ahead with two major events that would stay in the history books of wine and bring value to the name of the Enoteca. So, the auction has nothing to do with Covid.”

In other wine auction news, on September 9, Marchese Ferdinando Frescobaldi, president of the Bolgheri winery Ornellaia, and Giovanni Geddes da Filicaja, CEO, personally handed a check for 315,000 dollars to Karole Vail, Director of the Peggy Guggenheim Collection, part of the Solomon R. Guggenheim Foundation. The funds were raised during the Sotheby’s online auction, held from September 1 to 9, which sold prized limited-edition bottles designed by the artist Tomás Saraceno to bidders all over the world. Saraceno’s exhibition, Aria, is currently displayed at Florence’s Palazzo Strozzi, and explores new ways of living in our world. 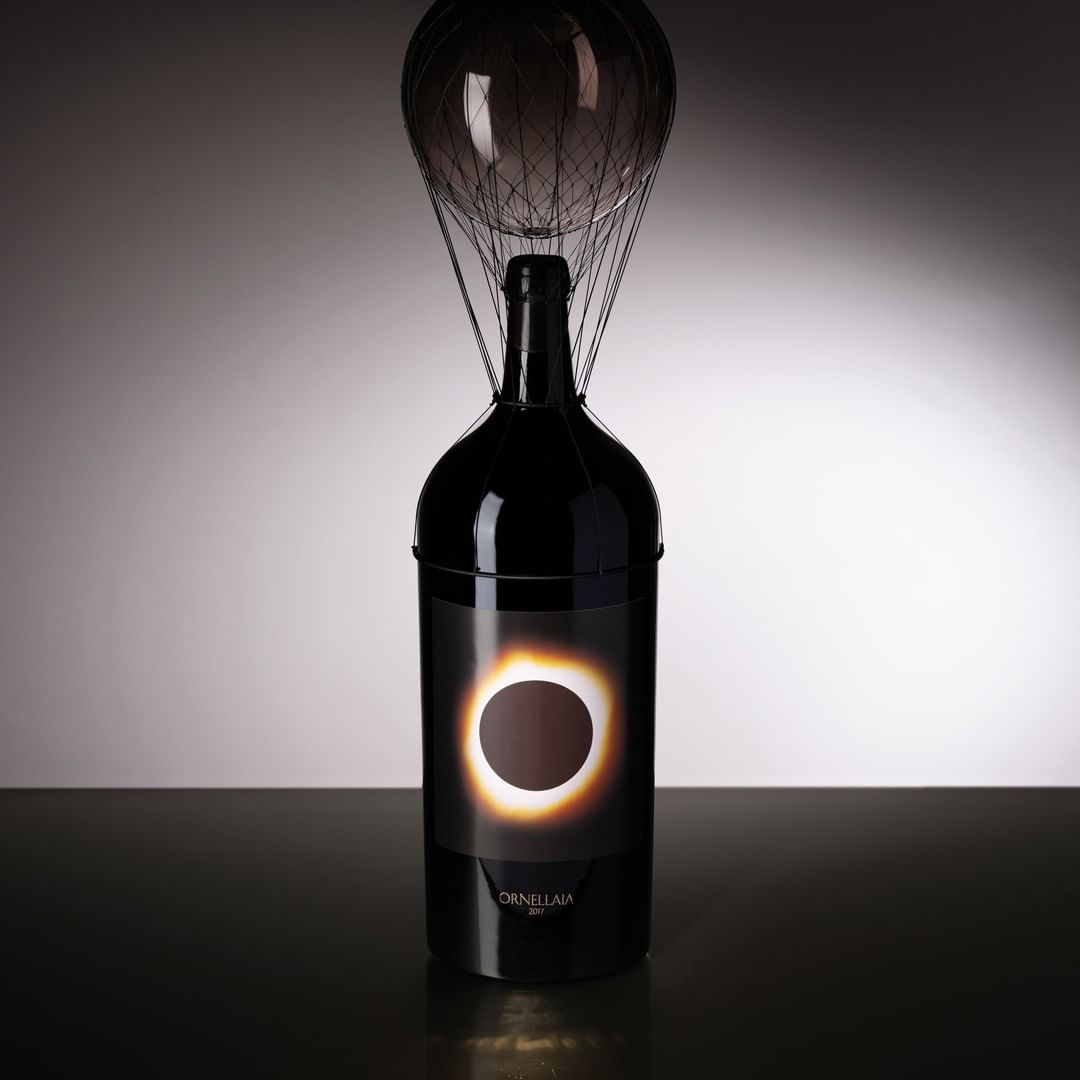 The auction’s most prestigious lot was the Salmanazar sculpture, titled “PNEUMA 4.21×105”, an impressive nine-litre bottle of Ornellaia 2017 topped with a floating sphere and thin black lines that are anchored to the neck. An additional eleven lots were auctioned by Sotheby’s: nine contain the same number of Imperials, which depict the various phases of the solar eclipse, sold individually and in pairs with a second Imperial of classic label Ornellaia. Another jewel available at the auction was a unique vertical of the last six years of Ornellaia, in twelve 750ml bottles featuring Vendemmia d’Artista labels in a celebratory wooden case. The auction culminated with a lot consisting of six Ornellaia Bianco magnums from the last three vintages.

For the last twelve years, Ornellaia has been furthering the Vendemmia d’Artista project, which supports foundations and museums around the world through the union of art and wine. Since last year, thanks to a collaboration with the Guggenheim, it has raised funds to support an equally innovative initiative, the “Mind’s Eye” program at the Solomon R. Guggenheim Museum, which was created to gift the joy of art to visitors who are blind or have low vision.

Giovanni Geddes da Filicaja, CEO of Ornellaia, commented, “The huge success that the Mind’s Eye program is having, also thanks to our donations, fills us with pride, especially when we observe how the same model can extend not only to other museums belonging to the Guggenheim Foundation, but also to other art institutions in the rest of the world, ensuring that this excellence continues to guide museum programming for the blind and persons with low vision, and to all people across the world.”