To encourage trade through the port of Livorno, Grand Duke Ferdinand I de’ Medici passed an edict in 1595 that allowed freedom of religion to all merchants. Soon, an English cemetery was established and, in 1600, a chapel was opened by the English Guild of Merchants. A Church of England congregation of largely British expatriates has been present in Florence since the early 1800s. From 1827, worshippers gathered in Palazzo Panciatichi-Ximenes d’Aragona in borgo Pinti, seat of the British delegation to the Court of the Grand Duchy of Tuscany. Other temporary solutions were found with the passing of time, including the English worshipping together at the Swiss Church, which met in Bianca Cappello’s house in via Maggio and later in via dei Serragli. In 1837, the first Anglican Church outside Livorno had been established and the Club des Anglais inaugurated in Bagni di Lucca, a fashionable resort for English travellers. British residents in Florence also felt the need for a place of worship of their own. In 1844, the first Holy Trinity Church was built in via La Marmora. The later Gothic structure, today’s Waldensian Church, was consecrated in 1904.

Mirroring one of the changes taking place in the interpretation of the Church of England’s Anglican faith in England, a number of the community split from Holy Trinity in 1877. The High Church movement looked back to the Catholic past of the Anglican tradition for its teachings, faith, liturgy and ceremony. The Church of Holy Trinity was considered to be too “low” in its worship, whereas the new St. Mark’s community desired services to be held in line with Anglo-Catholic teaching. They were led by their chaplain, the Reverend Charles Tooth (1831–94), of the Tooth Brothers’ brewery family from Burton upon Trent, whose brother Arthur, also a priest, was one of the founders of the movement in England. After beginning their meetings at a house in via dei Serragli, Tooth bought the building at number 18 via Maggio in 1880, not far from Ponte Santa Trinita. The building, which had probably been two medieval houses joined together, is believed to be one of the original homes of the Machiavelli family. It has a typical Renaissance façade with one side facing via Maggio and the back facing the Santo Spirito church. Tooth took an active part in the design of the church, together with the English Gothic architect George Frederick Bodley (1827–07). The church was positioned on the ground floor, while the upper floors were for the chaplain’s residence with other living spaces for the parish assistants. This would become St. Mark’s English Church, where it still stands today. Tooth celebrated the first Mass in 1881, although neither he nor the church was licensed to do so until the Diocese of Gibraltar recognized them in 1884. Tooth would remain chaplain until 1894, the year of his death. The aims of Tooth’s ministry were to glorify God, to offer a deeply spiritual and liturgical experience, and to be of service to the community. 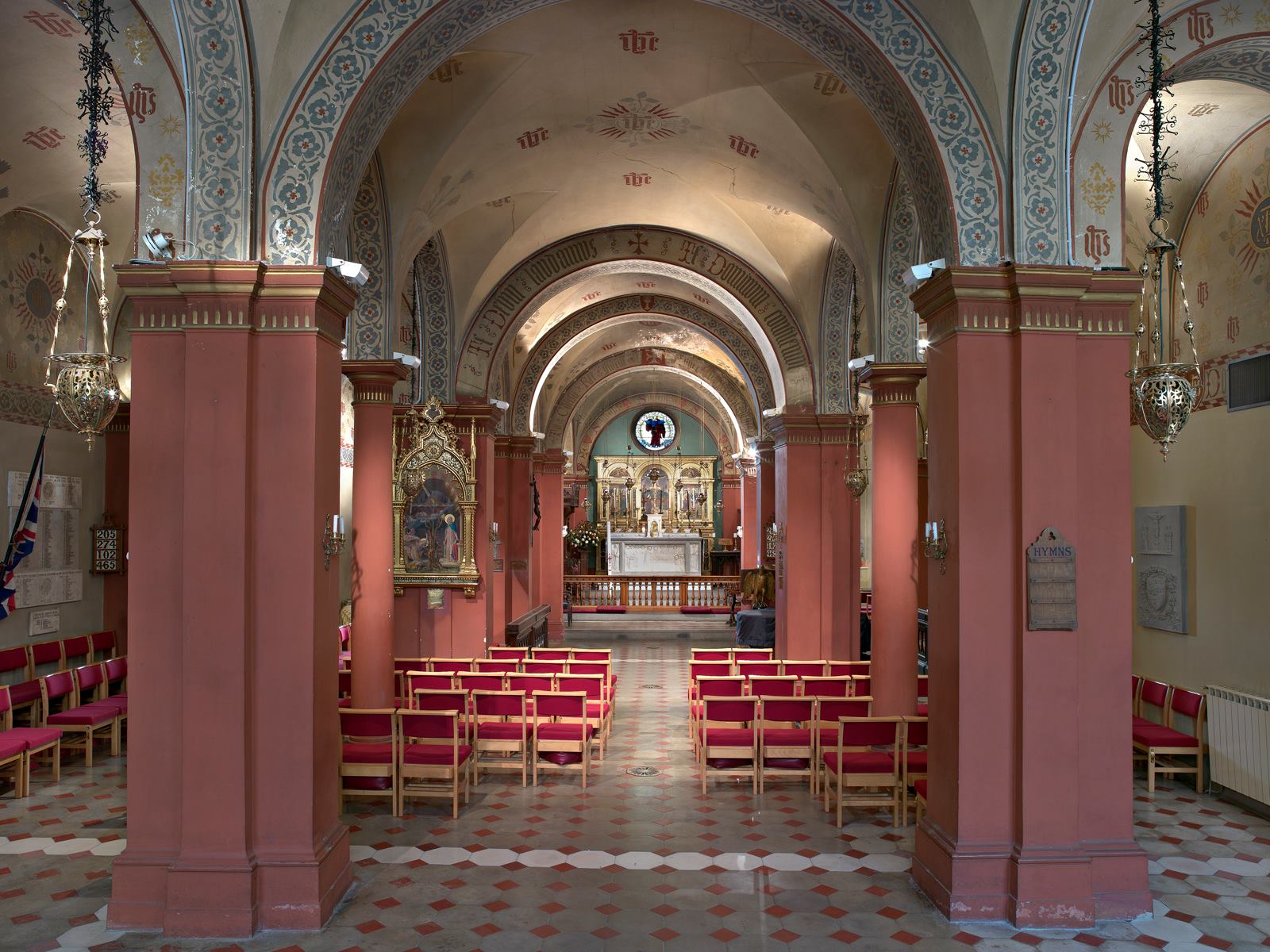 The Reverend Tooth also paid meticulous attention to the church’s internal beautification by recreating a Renaissance atmosphere inside the building. At this time, changes were occurring in England as the middle class continued to prosper, bettering living and working conditions and opening new horizons through travel. The pre-Raphaelites and the Arts and Crafts movement became very much in vogue. Both often used medieval, romantic or folk decorative styles and themes. Over the next decade, after raising sufficient funds, the beautiful and unique internal decoration and furnishing of the building took place in a reflection of these two styles. This was largely the work of Bodley, who was influenced by William Morris, a poet, designer and social activist as well as a leading light in the Arts and Crafts movement. Bodley designed the wall stencilling, which was paid for by the English second-wave pre-Raphaelite artist John Roddam Spencer Stanhope (1828–1908) around 1893. This same design was later used by Bodley in the neo-gothic Holy Trinity Church. In 1892, Bodley had stayed with Spencer Stanhope, who had moved permanently to Florence in 1880 after buying a villa at Bellavista in 1873 to winter there because of his chronic asthma. The altar reredos painting is thought to be by C. Jeffreys, but Spencer Stanhope probably designed the complete structure, the elegant Renaissance-style gilt frame and the carved marble altar front, as well as choosing the subject for the painting and the marble carving.

By 1906, the original St. Mark’s building proved too small for the growing congregation, so a church member, Thomas Brocklebank, bought the adjoining building and gifted it to the church. Over the next five years, it was used to build a lady chapel (now the organ vault), a sacristy, a bigger vestibule and extra apartments upstairs. By 1910, as the work progressed, it became evident that the slender columns in the church were not strong enough to bear the increasing weight, which resulted in them being replaced with the present somewhat cumbersome pillars.

Between 1939 and 1944, St. Mark’s was shut down, but left in the care of its custodian. Father Frederick Bailey, the chaplain, was arrested and interned for several months in 1944. On his release, he was allowed to return to England. With the arrival of the Allied troops, the church was reopened and services were held by a military chaplain. Father Bailey featured in Alex Preston’s 2014 novel, In Love and War, set in Tuscany.

In 1966, the flood struck Florence and the invading water rose nearly four feet inside the church, still evidenced by a dark stain on the marble font. The chaplain had time to save St. Mark’s most precious treasures, but the original English organ was damaged beyond repair. A new one was not inaugurated until 1970.

In 2008, the American sculptor Jason Arkles was commissioned to craft a statue of Saint Mark for the empty niche in the external façade.

Today, St. Mark’s continues its important ministry in addition to offering a generous cultural and social program to the congregation and friends coordinated by its Cultural Association. This includes Opera at St. Mark’s, concerts and recitals, a drama club, writers’ group, book club, yoga and other activities that everybody in the city is welcome to join.

Become a Friend of St. Mark’s

In celebration of its 140th anniversary, the Church is launching Friends of St Mark’s, a long-term fundraising initiative dedicated to keeping St Mark’s open and available to all for years to come.

All those who become a Friend will enjoy exclusive benefits such as the Friends’ Weekend, priority booking for events and more, whilst supporting a historic and vibrant community in the heart of Florence.