The San Salvi Church in borgo Ognissanti is not only home to the tombs of Alessandro di Mariano di Vanni Filipepi, better known as Sandro Botticelli (1445-1510), and the bella Simonetta Vespucci (1453-1476). It also houses another tomb, which is an unexpected surprise for many. Behind a small door on the right at the back of the church, there is the final resting place of a 57-year-old queen, who died in Florence on May 18, 1839. The queen was Maria Annunziata Carolina Bonaparte, the youngest sister of Napoleon Bonaparte, Queen of Naples between 1808 and 1815 and the wife of Joachim Murat.

Letizia Murat, one of her daughters, wished to bury her mother in Bologna, where she and her family lived, but the Pope denied this and it was not decided until 1841 that her mother should be buried “at night and without any pomp or funeral procession”. An autopsy revealed that Carolina died of stomach cancer, the same illness that caused the death of her brother, the former emperor, in 1821. The marble commemorative plaque on the wall bearing her royal coat of arms recites, in French: Here rests the body of Maria Annunziata Carolina Bonaparte born on 25 March 1783, married on 20 January 1800 to Joachim Napoleon Murat, King of the Two Sicilies, died in Florence on 18 May 1839. On several occasions over the years, as other plaques in a chapel attest, members of the Murat family and Napoleonic groups paid for restoration work to prevent the crypt from being abandoned or falling into a state of disrepair.

The seventh surviving child and third surviving daughter of Carlo Buonaparte and “Madame Mère” Letizia Ramolino, Carolina was born in Ajaccio, Corsica. During the French Revolution, after moving with her family to France, she was educated at Madame Jeanne Campan’s fashionable school, which was also attended by the children of Josephine, Napoleon’s wife. Despite opposition from her brother, at just 17 years old and a blossoming beauty, she married the dashing 32-year-old Joachim Murat, one of his generals, at Mortefontaine in 1800 and later in a religious ceremony on January 4, 1802 in Paris. They would have four children: two boys and two girls.

Intelligent, driven and ambitious, her husband’s interests became her own. Napoleon made the Murats the Grand Duke and Grand Duchess of Berg and Cleves in 1806, although they continued to live in Paris. When Joachim Murat became King of Naples on July 15, 1808, after Napoleon had sent his brother, Joseph, to occupy the Spanish throne, Carolina became highly involved in the affairs of their new kingdom. During Joachim’s frequent absences, Carolina acted as regent of Naples during his participation in the war in Russia in 1812-13, followed by the war in Germany in 1813, the war against Napoleon in 1814 and, lastly, during Napoleon’s return to power in 1815. In 1814, she sided with her husband, supporting a separate peace agreement with her brother’s enemies, thus retaining their thrones while Napoleon lost his. However, in 1815, Murat again changed alliances and sought to regain his kingdom after being defeated by the Austrians. With a small band of followers, he left Corsica, where he had fled and landed at Pizzo in Calabria on October 8, 1815. There he was arrested by the forces of the new Bourbon king, Ferdinand IV of Naples, tried for treason by a military tribunal, condemned to death and shot by a firing squad on October 13, 1815. Carolina learnt of his fate from the newspapers. 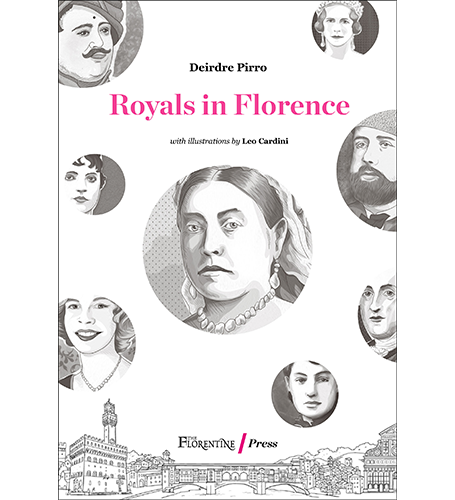 Florence has always held a certain allure for royalty. In Royals in Florence, we meet the regal figures who have resided or vacationed in the Renaissance city and its hills from the eighteenth century onwards. This co ållection of essays by writer and researcher Deirdre Pirro is a treat for the seasoned Italy lover. With illustrations by Leo Cardini

USA ORDERS: If you are ordering from the USA, the book is also available in “print on demand” through Amazon.com

In the meantime, Carolina took refuge in Trieste, then part of the Austrian Empire, where she assumed the title of Countess of Lipona (Lipona being an anagram of Napoli) and was subsequently given a temporary home in Vienna before returning to Trieste. While in exile—some say in 1817, while others believe it was in 1830—she morganatically married General Francesco Macdonald, who had been one of Murat’s aides-de-camp and the former minister of war of Naples. The general had followed her to Austria, but in 1820 he had purchased Palazzo Annalena, in via Romana, not far from Florence’s Pitti Palace.

With the help of an ex-lover and former Austrian ambassador to France, Prince Klemens von Metterich, Carolina was allowed to move to Florence in 1831 on the grounds of ill health. Considerable restoration on the Annalena palace and garden had been carried out and she would live there while awaiting work to be completed on Palazzo Grifoni, the building she had acquired in borgo Ognissanti. She turned the renamed Palazzo Bonaparte into a thriving salon for visiting dignitaries and local aristocracy. Today, it is the seat of the Hotel Westin Excelsior. Carolina also inherited Paolina’s villa in Viareggio on her sister’s death.

By now almost 60 years old, Carolina was still an attractive woman, although she had grown plump and was obsessed with trying to recover money and possessions from the French. Thanks to King Louis Philippe, she was allowed to return to Paris to pursue her claims and, in 1838, was finally granted a pension of 100,000 francs a year. Sadly, she had little time to enjoy this triumph.