If poets and artiststhroughout the centuries have called Venice ‘the jewel of the Adriatic Sea’,then the island of Murano is, without a doubt, a chip off the old block. Itsfame and history run parallel to that of the Venetian Republic, which governedfor more than a thousand years,

If poets and artiststhroughout the centuries have called Venice ‘the jewel of the Adriatic Sea’,then the island of Murano is, without a doubt, a chip off the old block. Itsfame and history run parallel to that of the Venetian Republic, which governedfor more than a thousand years, and it has been synonymous with the art ofglass blowing since the end of the 13th century. During that time, the rulingDoge, Pietro Gradenigo, ordered that all local glass factories be transferredto Murano to protect Venice from fires—a frequent phenomena in a city where thebuildings were still made of wood.

Glass blowing thusbecame a formal organized trade and the major means of income for the Muranesefamilies, as well as a source of much prestige for the Republic. The Dogemaintained a strong hold on the profitable industry through bylaws outlined ina manuscript called Mariegola, ‘mother-law’. In the 13th century, for instance, theexpatriation of workers was forbidden, but foreigners were allowed to workwithin the glass industry as long as they obeyed the rules and paid the heavytaxes imposed by the Venetian Republic. Muranesi artisans were required toprotect both their trade secrets and the exportation of traditional glassformulas. Thus the recipes used to produce the glass objects and thetraditional colors such as rosso rubino,cobalto, acquamarina have been handeddown da padre in figlio, and guarded with utmost jealously. Transgressors ofthe bylaws were often condemned to several years in a galley, and even, on rareoccasions, punished by death.

Despite strictregulations and tariffs, the maestrimuranesi thrived. Venetian glassprovided them with economic wealth and helped them achieve social advancementwithin Venetian society—so much so that many marriages were arranged betweenglass artisans and the daughters of the Venetian nobility.

A creative andindustrious people, the Muranesi were not afraid to experiment with different artisticmethods. One of their preferred glass-blowing techniques, called canna da soffio, was developed in the first century B.C. in Syria. The mosaic-styletechnique murrine and mold-based lavoro a stampo, was adopted by theRomans, but trace back to the Egyptians and early inhabitants of the Eastern Mediterranean.

Venetian glass iscalled ‘long glass’ as it remains malleable for a substantial period of time.Masters may blow, mold and shape the substance into graceful pieces before theobject petrifies. It takes several years for a maestro vetraio to acquire theskill in the art of glassmaking. Most enter the trade at an early age as anapprentice, or garzone, and later become, depending on their artisticability, a serventin and finally maestro.

When touring Murano,visit its noteworthy glass museum, instituted in 1861 by the Abbot VincenzoZanetti and the mayor of Murano, Antonio Colleoni. The most ancient piece inthe museum is the Coppa Barovier, a cobalt blue chalice with colorful enamel and golddecorations, which bears witness to the artistic ability of the maestri vetraithroughout the centuries. Manufactured during the later part of the 15thcentury on the occasion of the marriage between the Duke of Ferrara to anEstense noblewoman, it was called ‘Barovier’ in honor of the maker of crystalglass. Also known as the coppa nunziale, this typical chalice was often presented at weddingbanquets as a gift to brides and grooms. Reproductions of the wedding cup arestill produced on the island and sold throughout the world.

As one meanders through Murano, up and down the fondamenta, overbridges, and in and out of glass shops, one can readily appreciate delicatereproductions of period pieces as well as colorful modern pieces from theisland’s most prestigious glass factories and contemporary artists. Amongthese, Master Lino Tagliapietra is famous for the exceptional dexterity withwhich he creates his multicolor dishes and vases; Alfredo Barbini is renownedfor his animal sculptures; and Archimede Seguso is known for the vibrant colorshe uses for his pieces. Many others continue to uphold a tradition that beganunder the hawk eyes of the Venetian Republic.

Lucia Barbini Falcone, author of 'Over Bridges Across Tables', a memoir about her life on the island of Murano, is the recipient of the Eistner Award in prose and has received writing honors from Writer's Digest. She lectures on the history of Murano, and teaches an ?Italian for Travelers' class in the United States. She also gives courses on Italian cooking. Her book 'Over Bridges Across Tables' can be found at: www.trafford.com/05-1443 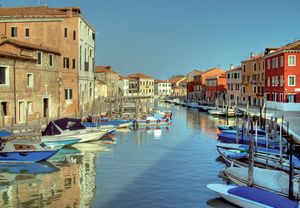 A morsel of perfection

I come from a Venetian family where the imperative of every meal was to create the perfect bite. For my mamma, it meant getting up at five in the morning, while my five siblings and I were still asleep, to make homemade tortellini filled with a minced paste of delicious