Manhunt for the misbehaving priest

Letter sent by Onofrio Camaini, the Sienese Chief of Justice to Duke Cosimo I de Medici on April 6, 1559:   [] The trial of Terenzio Usinini of Siena, who was arrested for the attempted rape of the Widow of Belforte, is almost over [] The result of the trial is that

Letter sent by Onofrio Camaini, the Sienese Chief of Justice to Duke Cosimo I de Medici on April 6, 1559:

[] The trial of Terenzio Usinini of Siena, who was arrested for the attempted rape of the Widow of Belforte, is almost over [] The result of the trial is that he will be given the death sentence for having attempted to commit rape and for committing an armed assault which drew blood from the aforementioned widow. Despite the fact that his attempt was unsuccessful he will be executed [] for it cannot be denied that this case is both horrible and shocking given the widow’s reputation as a virtuous woman and the fact that he broke into her home at night through a window. The accused has a very bad reputation which emerged during the testimony heard at the trial. [] On the night of the attempted rape, Terenzio was accompanied by a certain Santi di Lelo, a priest from Belforte, who, a few months earlier, had been seen throttling a local townsman because of some business involving the man’s wife who was apparently having an affair. Terenzio, along with the priest is believed to have murdered the poor man []

It was decided to arrest the priest [] but the Lieutenant of the Bargello was not able to track him down, however, according to the Lieutenant, a peasant from the area, who has been promised a handsome reward, hopes to enable us to capture the priest with the assistance of a woman who was formerly having an affair with the priest []

It may seem strange that the Chief Justice of Siena would write to the Duke of Florence, Cosimo I, in such detail about a sordid and complicated criminal trial. However, Siena had only recently been annexed by Florence and therefore came under Florentine jurisdiction. In December 1558, the Duke of Tuscany issued a severe law against anyone who committed violent crimes, especially those of a sexual nature, against women. Camaini’s dual role as Chief of Justice in Siena was to ensure that the case against the defendant proceeded correctly and that the full punishment was carried out in order to reinforce the new law.

The defendant, Terenzio, argued that being younger than 25 years old, he should be punished as a youth rather than as a man, since the law was generally more lenient in such cases. The Chief Justice wished Cosimo to know that Terenzio also stood accused of murder, and that this killing was carried out with an accomplice, who was also present on the night of the attempted rape. The accomplice is a local priest from the country town of Belforte.

The information that the accomplice-murderer and attacker of a virtuous widow is a priest does not seem to require any further comment by the Chief Justice. That the Lieutenant of the Bargello has to hire the collaboration of a peasant and an adulteress appears, however, to be more newsworthy than the serious crimes of a country priest. This extract also indicates that arresting anybody not caught at the scene of the crime was a complicated and difficult process in the sixteenth century, requiring local knowledge and assistance. 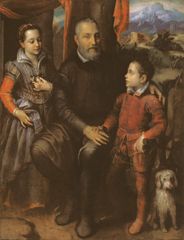 …Count Nicola of Pitigliano had sexually assaulted his own daughter-in-law, wife of the Count’s son, Alessandro … and the family of the woman were planning to go to Pitigliano ...