Part of living abroad for an extended period is getting to know the local sports teams, and Florence has many to follow, from water polo and rugby to, of course, soccer. Browse back issues of TF for other students' experiences, whether discovering Florence's museum of soccer (TF 114) or

Part of living abroad for an extended period is getting to know the local sports teams, and Florence has many to follow, from water polo and rugby to, of course, soccer. Browse back issues of TF for other students’ experiences, whether discovering Florence’s museum of soccer (TF 114) or attending a Viola game (http://bit.ly/AfOy9f). Here, expat Fiorentina fan Melinda Gallo shares her knowledge of the team’s history. Take these quirks and triumphs with you for pre-game and halftime conversation.

The ACF Fiorentina is the only Italian sports team ever to support a charity, and it has done so for the last two years, sponsoring Save the Children (www.savethechildren.it), a foundation that has been fighting for children’s rights in the world since 1919. Moreover, Save the Children has never been supported by any other professional sports team. In Spain, the FC Barcelona soccer team has been a sponsor for UNICEF for the last five years.

The majority of the Fiorentina’s head coaches have been Italian. The team welcomed its first Serbian coach, Sinisa Mihajlovic, for a little over one season. Other non-Italian coaches came from Hungary, Austria, Argentina, Brazil, Sweden and Turkey.

The Italian national soccer team has won the World Cup four times-in 1934, 1938, 1982, and 2006-with Viola players being a part of the team only twice. Luca Toni and Alberto Gilardino were with the ACF Fiorentina when Italy won the 2006 World Cup in Germany, and in 1982, Viola players Giancarlo Antognoni, Francesco Graziani, Giovanni Galli, Pietro Vierchowod, and Daniele Massaro were on the Italian team when it won the 1982 World Cup in Spain.

The Fiorentina is in fifth place behind Inter, Juventus, Roma and Milan for having participated in 74 out of the 80 seasons in Italy’s premiere league, the Serie A. What was the team doing in the six seasons not in Serie A? It usually spent only one season in Serie B (second division of Italian football) and headed right back to Serie A. In 2002, the Fiorentina was demoted to Serie C2 (fourth division), won the championship, skipped Serie C1, and played in Serie B to return to the Serie A the following year.

The two top scorers in the history of the Fiorentina are Argentinian Gabriel Batistuta (known as ‘Batigol’) with 168 goals, and Swede Kurt Hamrin, called ‘Uccellino’ because when he ran, he looked like a bird flying, with 150 goals. Each one played for the Fiorentina for nine years.

Many of the Fiorentina’s former players who are not originally from Florence have returned to settle down in the city after finishing their professional football careers. Among them are Kurt Hamrin, Claudio Merlo, Luciano Chiarugi, Giuseppe Virgili, Giancarlo Antognoni, Giovanni Galli, and Christian Riganò.

Melinda Gallo is a writer who has been living in Florence since 2004. In her blog, Living in Florence (www.melindagallo.com/blog), she recounts her life in a city that she loves and appreciates more every day.

The Arno: a year in photos

Melinda Gallo captures the Arno River all year round: from crisp January to deep-heat August to the sparkling lights of December.

Season ends in a draw For the last game of the season, the Fiorentina played against Brescia, though neither team had anything to fight for: Fiorentina could not reach the European qualifications and Brescia was headed for the Serie B. After only two minutes, left-winger Juan Manual Vargas scored 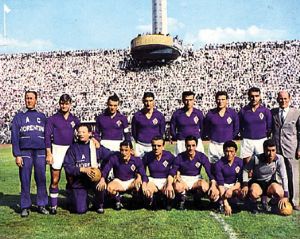 The Fiorentina was founded by Marquis Luigi Ridolfi in 1926 by uniting two different soccer teams: PGF Libertas Firenze and Club Sportivo Firenze.   Even though the Fiorentina was not established until 1926, soccer was introduced to Florence in 1898. The city's first team had an English name, the '