A gift need not be extravagant to be cherished, for, as the saying goes, ‘It is the thought that counts.’ But for those living between two cultures, the thought behind the gift is sometimes hard to fathom. What might seem the product of cross-cultural differences may simply

A gift need not be extravagant to be cherished, for, as the saying goes, ‘It is the thought that counts.’ But for those living between two cultures, the thought behind the gift is sometimes hard to fathom. What might seem the product of cross-cultural differences may simply be a difference in tastes; evidence of the male-female divide; practical vs. romantic sensibilities; or just people being, well, people. However, while disappointing, inappropriate or just plain weird gifts may provoke tears, laughter or head scratching, they are memorable. (To wit: the lump of Cheddar cheese a flatmate once gave me.) So, for a bit of festive fun, we asked TF’s Facebook fans to tell us about the strangest gift they’ve ever received from a Florentine friend, relative or beloved. We leave it to you to ponder the thought behind each.

Georgette: Pink pyjamas with a teddy bear on top. And an iron.

Bruce: Every single year … that horrible stuff everyone seems to love but me: panettone.

Diana: Cute granny panties from my boyfriend’s aunt. I am 29 … I totally wear them, by the way.

Donna: One Christmas, my (Italian) husband gave me a plastic wastebasket for underneath the kitchen sink.

Diana: A cheap, knockoff perfume from the mercato.

Harriet: My husband gave me something he called a ‘chiave a stella.’ It’s for changing tires. He’d even wrapped it. Another year he gave me a ladder.

Carole: My husband bought me an electric grill for our first Christmas as husband and wife. I was so disappointed when I opened it. I got electric shocks [from] it too.

Janet: A gold chalk photograph frame on a half-metre-long stand decorated with cherubs.

Catriona Miller is a recently graduated Scot who loves writing, meeting new people and baking. She has become slightly addicted to coffee since arriving in Italy and has no qualms about ordering a cappuccino after 11am. You can follow her on her blog at http://bellamozzarella.wordpress.com

With almost 40 years of charitable activity, the American International League of Florence (AILO) has recently welcomed a new president, Blandina Steinhauslin. Steinhauslin granted The Florentine one of her first interviews since taking the new position, describing the reasons why she became involved in AILO and her hopes for the

Our events listing keeps you up to date on the latest and greatest in culture, music and other English-friendly entertainment. This is a selection of the best events in Florence and Tuscany for December—and beyond.   CINEMA/Winter screen December 18–31 Odeon Cinema, piazza Strozzi 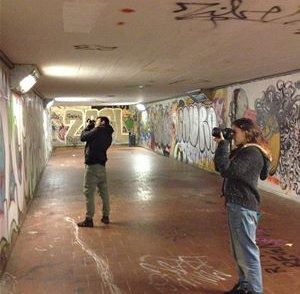 The exhibition ‘Street Textiles’ is part of a photographic project from the Villa Lorenzi and Fashion Room bookshop in Florence. The exhibition showcases works from young people, aged 16-20, who are part of the group, 'Giovani per il Futuro'.   The idea behind the project wasn’