7 gardens in Florence that you have to see

It had never really dawned upon me to visit the gardens of Florence. Maybe because until recently I was still trying to avoid doing things that my mother would do. However, having surpassed my teenage rebellion stage I was finally able to discover the gardens of Florence, and the boundless beauty that comes with them. As I started out along the path of Florentine garden discovery I realized that the gardens I visited were not only breath-taking locations of art and nature but also a fount of mystery, esotericism and catalysts of self-discovery. Here’s a list of lesser known gardens in Florence.

Embracing the hill leading to piazzale Michelangelo, you stumble across Florence’s Giardino delle Rose. Blooming with 1,000 or so specimens of roses, it’s an ideal place to relax and enjoy the view of Florence from on high. The garden, designed in 1865 by Giuseppe Poggi, is further enriched by an exquisite Japanese Shorai oasis, donated by the Japanese architect Yasuo Kitayama, and by Jean-Michel Folon’s quirky bronze men.

In the lovely setting of the Villa Bardini, this garden boasts one of the prettiest views of the historical center of Florence. Some claim it deserves the label of the most beautiful garden in Florence, with its fragrant paths, wisterias and English garden.

Costa San Giorgio, 2 / Via dei Bardi, 1 (there are two entrances)

Contrary to what you might think, the emblem of Florence is the iris, not the lily. Which is what makes the Giardino dell’Iris so important. Opened in 1954 near the Rose Garden and home to some endangered species of irises, it’s an oasis of tranquility where you can escape the hustle and bustle of the city, read a book and lose yourself in a fragrant mosaic of colors. Part of the garden is currently closed for maintenance work.

The garden, located on the way up to Fiesole, is a haven of esoteric and symbolic architecture. Walking through the magical garden is an experience designed to culminate in self-discovery. All paths lead to an Egyptian temple, a product of Stibbert’s egyptomania, which can be accessed by water and by land. Mysterious and evocative, the park is full of surprises including a Hellenistic-inspired temple, Venetian corridors and a small island in the middle of the lake.

Open every day except Thursday from April to October, 8am – 7pm; from November to March, 8am to 5pm. Closed January 1, Easter Sunday, May 1, August 15 and December 25.

The crowning jewel of the Four Seasons Hotel Florence, the Giardino della Gherardesca is a refined urban green space. Strolling through its carefully kept, vast lawns or resting in the shade of one of its ancient and magnificent trees one will be reminded of nature’s soothing powers. The garden is famous for its Taxus Baccata, one of the longest living evergreens in Europe, as well as for being the first garden in Florence to grow the fragrant mandarin orange trees, imported from Naples in 1844.

Only open to the public for certain occasions

The Giardino Torrigiani is another garden that is designed to elicit self-reflection. Nature alternates symbolic architecture such as Osiris’s statue and Merlin’s cave, the legendary character that is meant to evoke man’s inner strength. The garden is the largest private garden inside Florence’s walls and home to lemon houses, over 13,000 of species of trees and 5,500 vase plants.

Only open for guided tours upon prior appointment

A few kilometers away from Florence stands the UNESCO World Heritage Site: Parco Mediceo di Pratolino. An enchanting park brimming with nature and other wonders such as the Apennine Colossus by Giambologna as well as the Cupid cave, the Mugnone fountain and chapel. A garden fit for kings.

Open from late April to late October, on Fridays, Saturdays and Sundays, 10am – 8pm

Rebecca Gualandi was born in Paris, lives in Florence and studies Philosophy at the University of St Andrews, Scotland. Trying to embrace all the different cultures has been a difficult but rewarding experience for her. She is now interning for the summer at the Florentine, where the Anglophone and Italian worlds collide and where she hopes to acquire experience to pursue a career in writing and publishing. 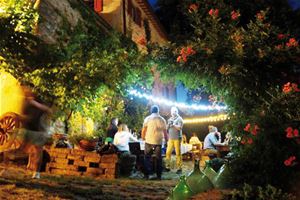 On the threshing floor

Started five years ago, Montespertoli’s A Veglia sulle Aie celebrates its agricultural heritage: the land, its fruits and the traditions of this farming community.   Having spent most of my childhood growing up on one of these Tuscan farms, a favorite memory of mine is catching lucciole, fireflies,

When it comes to coffee, most people simply go with what’s available, perhaps compromising at the three-way intersection of the convenience and the atmosphere of the nearest café and the ... 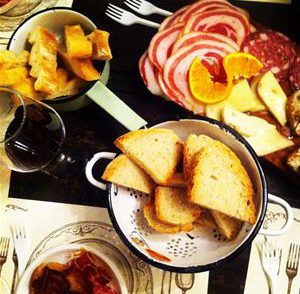 Eating well doesn’t have to lead to negative bank statements. Whether you are a student, travelling on a budget or looking for a good spot for a reasonably priced business lunch, here are our some of our favourite under € 15 list of lunch spots in Florence.