The flood of 1966 may have destroyed many things, but it also uncovered a priceless artifact plastered over long ago: in the days following the alluvione, a wine door resurfaced at the famous Vivoli gelateria.

While doing research and photographing these buchette del vino around the centro storico for my forthcoming book, I was guided only by a list of addresses and a few names of noble families that once lived in various palazzi around town. After walking more than 25 miles in three days, I was delighted to arrive at via Isola delle Stinche, 7r, the home of the historic gelato. My first priority was, of course, a small cone of stracciatella and caffè: this gave me the opportunity to speak with the lovely woman behind the cash desk, Simonetta Migliori.

As I paid, I mentioned I was writing about the wine doors and commented that theirs was the first I’d seen that was so freely visible to the public—open on both sides of the wall. She then told me the staff had had no idea it was there prior to the flood—they only discovered it after the waters washed away the stucco. With the wall then in need of repair, they decided to renovate the wine door as well. 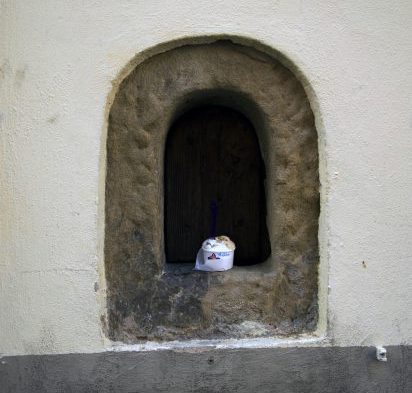 So what are these wine doors? Usually, all that’s left of them are their stone frames, which could be mistaken for religious tabernacles. These openings used to be a means of buying wine from local noble families—landowners who’d long invested in agriculture and pressured Cosimo I de’ Medici to win their favor by permitting direct-to-buyer sales. An official declaration went out on February 28, 1559, allowing the families to sell the wine they produced directly at their residences. It wasn’t until the Bando Granducale of October 2, 1749, however, that the concept of botteghe a sportello—shop windows set up in homes—was solidified, significantly weakening the power of the wine guild.

In the years of its activity, the Vivoli wine door’s palazzo belonged to the historic Lottini family—their family crest, identifiable by its ribbons, still adorns a corner of the building. 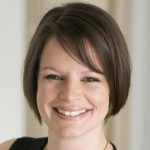 Robbin Gheesling lived in Florence from 2013-14 while obtaining a master's degree in Italian Studies from Middlebury College. She is now writing a book about the wine doors of Florence and runs Vineyard Adventures wine travel consulting company.