On May days when tourists descend in droves by plane, train and automobile, it’s time to take to the hills—and one steep ascent in particular. 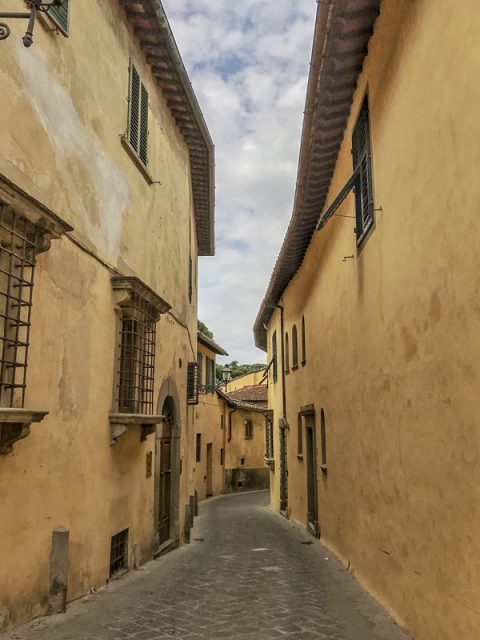 Via dell’Erta Canina is a special street, unknown to the masses and often overlooked by locals. One Sunday afternoon, after taking on Florence’s ultimate natural gym (the climb up the Monte alle Croci steps from Porta San Niccolò to piazzale Michelangelo) to breathe in the spring scent of Florence’s Rose and Iris Gardens, I veered off the usual route back down the hill, turning right onto viale Galileo instead and walking round the rim of the green basin towards the affluent row of real estate in the distance. Barely a few steps right into via dell’Erta Canina and realization dawns that the soundtrack to this narrow road lined with ochre walls is the great outdoors. Birds sing, crickets chirp and bees buzz around the wisteria tumbling over the sides of the aptly titled Villa Bellavista: it’s like wandering into another Florence of another time. A truism if you consider that Erta Canina was one of the few ways of reaching the city centre from the countryside until Giuseppe Poggi designed the ring roads in the late nineteenth century. 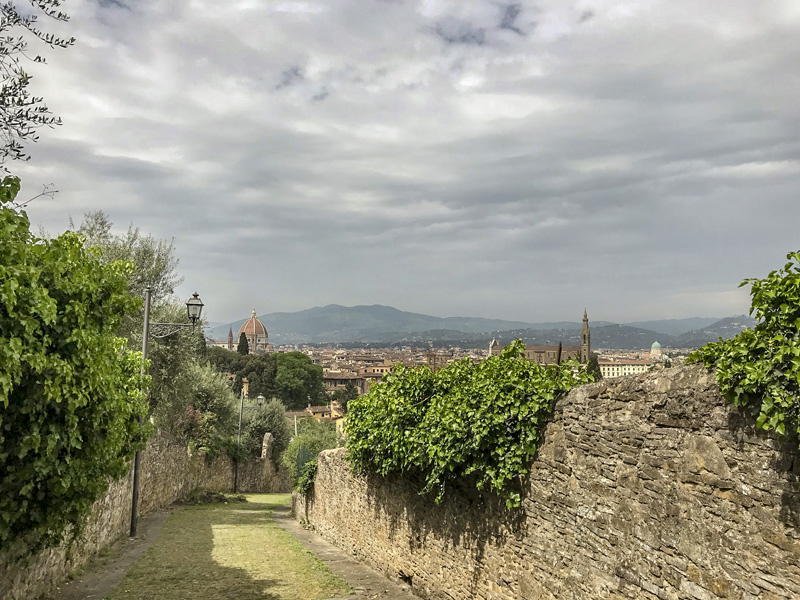 Wrought-iron streetlamps adorn the walls and etched terracotta pots top stone pillars. There’s one lone parked Vespa and, oddly for Florence, there’s absolutely nobody in sight. An almost illegible plaque on a villa front catches the eye, a tip encouraging travellers to rest given the steep slope that ensues: RIPOSO – DALLA PORTA DI S. MINIATO PER L’ERTA CANINA BRACCIA 790 OSSIA UN TERZO DI MIGLIO (REST – FROM THE GATE OF SAN MINIATO FOR L’ERTA CANINA 790 “ARMS”, THAT IS, A THIRD OF A MILE). 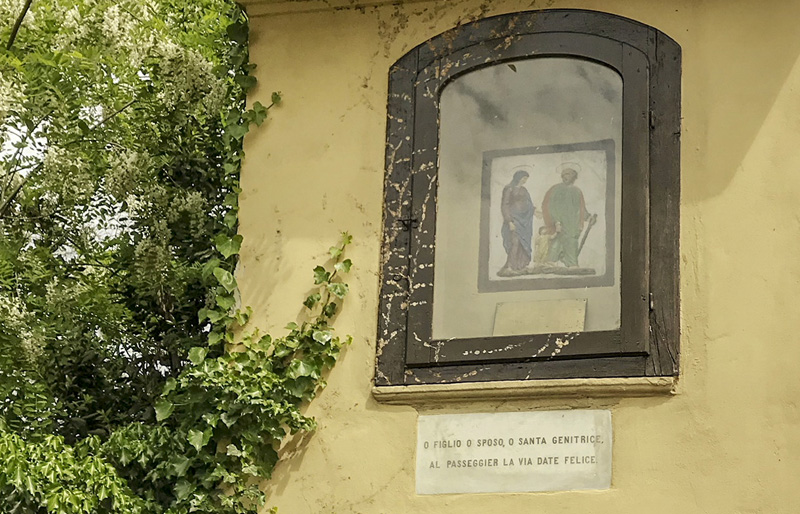 Nowadays that exhortation only really applies at night when the stylish streetlamps cast a dim light. A silent stroll takes you past the La Fantina Institute, once probably the prettiest school complex in Florence and now partly home to the Saffi catering college, hidden behind gates. Weathering on the walls and a spray of graffiti aside, we reach the end of the “driveable” stretch of the street, where a couple of miniscule vehicles might get lucky in locating not entirely legal parking spaces. A tabernacle of a wife, husband and their child signal the next stretch, bearing the phrase: O FIGLIO O SPOSO, O SANTA GENITRICE, AL PASSEGGIER LA VIA DATE FELICE (O SON O HUSBAND, O HOLY MOTHER, GIVE US HAPPINESS AS WE WALK THIS STREET).

The steep slope gently winds its way down, covered in a canvas of grass and moss, with olive groves opening up to the right, Santa Croce’s beautiful brown bulk standing strong and Brunelleschi’s Dome dominating the skyline. The only blight is the collapsed wall at the end of the incline, a seemingly permanent blot on the otherwise bucolic scenery given that the incident dates to December 2012. Guardrails protect passersby but detract somewhat from the charm. Our descent is complete—although, strictly speaking, the main branch of via dell’Erta Canina also stretches left to the Carraia park, popular with San Niccolò families, and right in another route to the Rose Garden.

The archaic Italian expression poggiare all’erto sums up this steep, scenic and silent street. Its meaning? “To be sublime.” That wall really needs fixing.

1 / If you don’t fancy walking up the hill, catch bus no. 12 and get off at viale Galileo 7.
2 / To restock your calorie count, nab a table in the garden of La Beppe Fioraia (via dell’Erta Canina 6R) at the bottom of the hill.