Seven gates remain as reminders of the third circular wall built between 1284 and 1333 that once surrounded and defended the city of Florence: the Porta al Prato, Porta San Gallo and Porta alla Croce sopra l’Arno on the north side of the Arno river, and the Porta San Frediano, Porta Romana, Porta San Miniato and Porta San Niccolò in the Oltrarno area. Their heavy wooden doors were closed and locked every night at 1am with keys kept at the Garderobe of Palazzo Vecchio and reopened early the following morning up until the mid-1800s when most of the walls were demolished. During the day, the gates had another practical purpose. They became customs checkpoints through which those wishing to bring goods into the city—or take them out—were required to pay excise duties to the “gabellieri” (public tax collectors who received a percentage of the takings). So profitable was this activity that the merchant and historian Giovanni Villani tells us these taxes yielded 90,200 gold florins in 1338 and were Florence’s major source of income. 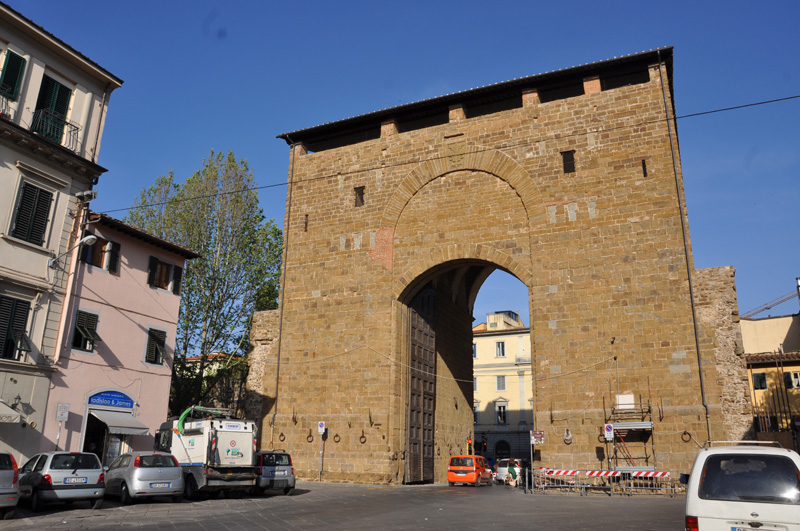 The Porta San Frediano, the access gate to Pisa and the westernmost gate in the Oltrarno, which has recently been renovated and will soon be opened to guided tours, is located at the point where borgo San Frediano opens into via Pisana. It is one of the most majestic gates, named then after the nearby church of San Frediano (now replaced by the church of San Frediano in Cestello), with a fornix of 8 meters, oak doors amply peppered with iron studs, heavy round wrought iron rings where the reins of horses could be safely fastened and supports for torches to illuminate it at night. Said to have been designed by architect Andrea Pisano (1290–1348), it was built between 1332 and 1334. Known principally for his work on three of the bronze doors for the baptistery of Florence’s cathedral, which he completed in 1336, after Giotto’s death the following year Pisano succeeded him as the chief architect on the construction of the cathedral’s bell tower.

Given its pivotal position, on occasions, history has made the Porta San Frediano the backdrop to dramatic events. One such event occurred in early 1494. Following the unexpected death of the king Ferdinand I of Naples in January of that year, the king of France, Charles VIII, (1470–98) decided the newly vacant throne was rightfully his by hereditary. In September 1494, he invaded Italy with 25,000 men including 8,000 Swiss mercenaries. He marched into Pavia in October 1494 and then into Pisa in early November 1494 with virtually no opposition impeding his progress. Fearing a massacre by the French, the then ruler of Florence, Piero de’ Medici (1472–1503), nicknamed the “Unfortunate”, sent negotiators to Charles, who presented him with the keys of the city as well as surrendering several strategic fortresses throughout Tuscany and handing over the huge sum of 120,000 ducats out of the Florentines’ pockets.

On November 17, 1494, the 24-year-old French royal with his army of 10,000 infantry, 800 sumptuously dressed armed nobles on horseback, archers, cannoneers, trumpeteers and tambourine players triumphantly entered the city through the Porta San Frediano.

To allow them to pass unobstructed they temporarily removed the wooden doors and demolished a section of the walls. For what was seen as his inadequate handling of the situation, the Florentines exiled Piero de’ Medici and his family, whilst Girolamo Savanarola welcomed the conqueror as a saviour who had liberated the city of Medici corruption.

Continuing on his mission, Charles left Florence in November 1494 and finally took Naples the following February. He was, however, soon to lose both his Neapolitan kingdom and all his military gains. In fact, two and a half years after his retreat from Italy, he was on his way to watch a game of royal tennis in Amboise on April 7, 1498 when, ironically, he struck his head on a wooden door frame and died from a fractured skull.

As weapons changed, the height of the Porta San Frediano was reduced particularly just before the siege of Florence between 1529 and 1530. Since then, the Porta has undergone many restorations like those in 1919, 1928 and in the 1970s after the flood before this last major overhaul was completed in 2018. The Florentine coat of arms in pietra serena at the peak of the archway facing the city is modern, while the monumental plaque to the fallen of World War II was placed there by the people of the Oltrarno in 1951.

There is also important iconography depicting the Porta San Frediano with two well-known images that immediately come to mind. One is Filippino Lippi’s painting Madonna and Child with St. Catherine of Alexandria and St Martin of Tours, dated between 1485 and 1488, housed in the Nerli Chapel of the church of Santo Spirito. Alternatively named the Pala de’ Nerli after the family who commissioned the altar piece, behind the loggia we can see an image of the Porta San Frediano and the commissioner who is hugging his daughter in front of his wife as a groom tends to his horse outside his palace. The other famous image is Thomas Patch’s A Panoramic View of Florence from Bellosguardo (1767), now in the collection of the Ente Cassa di Risparmio di Firenze, which illustrates the agricultural nature of the land around the Porta San Frediano at that time.