Walking from Pontassieve to Pievecchia

In June, there’s no more nostalgic walk in Pontassieve than from via Palagi to Pievecchia. 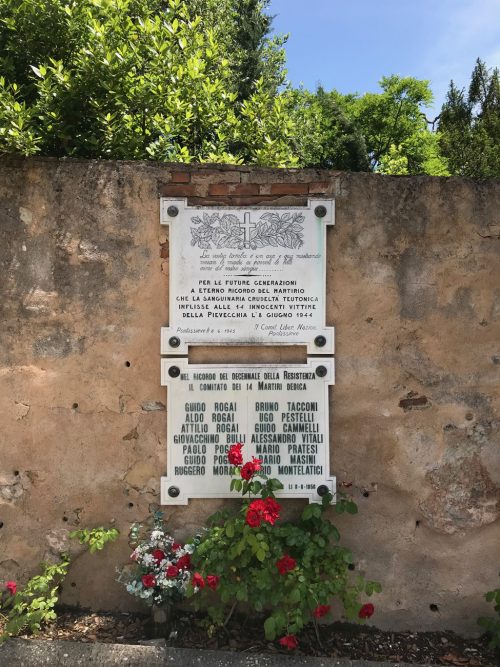 On June 8, 1944, the hushed hamlet of Pievecchia would never be the same again. It all began in via Palagi in the nearby town of Pontassieve, where a group of partisans burst into the military police barracks; their purpose was to seize arms. Upon completing their mission, the freedom fighters started back to their base camp at Monte Giovi, passing by Pievecchia, chancing upon two Germans playing cards. The ensuing gunfight killed one of the German soldiers, while the other escaped, raising the alarm. An antiaircraft battalion immediately began to bomb Pievecchia to prevent the locals, fearful of reprisal, from fleeing to safety. A fascist contingent quickly drove up to the village to finish the bloody task. Fourteen men (the youngest aged 17 and all under 47) were shot dead before their terrified families, pleading for clemency and compassion, while another 25 locals were captured and deported.

Today, the walk from Pontassieve to Pievecchia is a far cry from those distant horrors. Via Palagi is a quiet residential street that runs from the sixteenth-century Medici bridge in the town’s historic hub, along the Sieve River. Just after the gushing weir, a left turn leads on to via di Grignano and up into the quietude of the countryside. The rural lane winds up at a gentle gradient of a natural gym. Olive trees dot the hillside, lavender scents the air and poppies punctuate the greenery, as if in memory of that fateful June day. The town drops into the distance, while handsome horses whinny in a paddock, chickens chuck and tractors take turns doing their daily business. The higher you climb, the greater the silence and the more sublime the views of verdant vineyards patchworking the Pelago side of the river.

After about 40 minutes, on the left a brown signpost points the way to Pievecchia “Eccidio nazifascista 8 giugno 1944” (Fascist Nazi massacre June 8, 1944). The street tightens and turns, the tower of the privately owned nineteenth-century villa beckons. At the narrowest bend in the road, sudden shade provides slender solace from the commemorative stones on the walls pockmarked with bullet holes. Picturesque Pievecchia is still, understandably, pensive.