2019 has been hyped as the year of Leonardo, with initiatives planned to mark the 500th anniversary of his death. But the Renaissance man has some competition in Catherine de’ Medici, high priestess of hospitality for Florence—or France, depending on how you slice it.

Catherine came into the world 500 years ago this April, as Leonardo was entering his final days. Her legacy is a complicated one. She is frequently (if not always accurately) credited with introducing myriad dining innovations to France, via the Italian cooks who trailed her there after her marriage to Henry II. Many myths about the extent of her contributions continue to circulate; Dr. Martina Becattini, co-curator of the recent Stibbert Museum exhibition Conviti e banchetti. L’arte di imbandire le mense, and a professor at Florence’s Istituto Lorenzo de’ Medici, nonetheless says the French court still “owes much to this explosive Florentine female figure.” 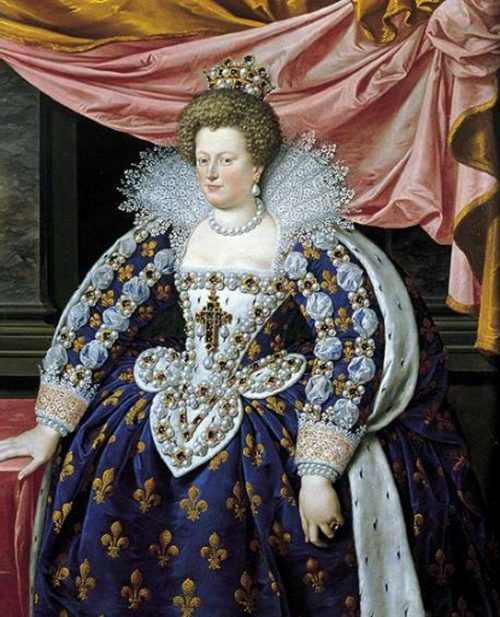 Catherine’s “explosive” influence didn’t end in 16th-century France: for current-day creative types, she’s a cross-disciplinary icon, a muddied memory on whom you can project what you like (fine taste in perfumery? Culinary prowess?) and draw inspiration as needed. The versatile Florentine artist-designer Marina Calamai fondly recalls thinking of Catherine and her achievements while completing a gelato-themed painting—“Sweets,” says Calamai, “are my first love in art”—and building an exhibition that placed desserts in dialogue with Renaissance splendor. Calamai says she sees “a strong correspondence between the multidimensionality of the Renaissance era and the multidimensionality of Catherine de’ Medici, and in this sense feel{s} connected to her.”

“Multidimensionality” might be the most succinct way of framing Catherine, and the most fruitful light in which to consider her legacy. Particularly as the force behind elaborate, often politically driven court festivals she fashioned—“joyeuse magnificences” that blended food, music, theatre, dance and more into extended entertainment buffets. (Here again, Calamai has a kinship with Catherine, having recently produced Apologia della creatività, a multisensory show set to be restaged in Florence later this anniversary year.)

Catherine as creative hostess and related themes will be explored at a forthcoming conference, “Catherine de’ Medici: 500 Years of Italian Hospitality,” hosted by Apicius International School of Hospitality at Florence University of the Arts (a call for papers is open until January 31.) Coordinator of the March 16 conference Marco Di Manno, who teaches a FUA course in food and culture, said he is intrigued by Catherine as an example of feminine creativity and talent. Her multifaceted fêtes, Di Manno told TF, reflected an enthusiasm for hospitality that he finds to be in line with the “playground” role today’s Florence frequently assumes: “{For better or worse}, Florence has become a center for grand parties, weddings, often organized by foreigners, in venues like Palazzo Pitti”—backdrops suited to sumptuous banquets not too far off from those she dreamed up.

Catherine thriving as courtly hostess could speak to something deeper-seated than lavish tastes and political motives: an ethos of reconciliation and finding common ground. Daniela Cavini, author of Behind the Medici Men: the Ladies, suggested to TF that what some historians see as Catherine’s major flaw—her inability to effectively take sides—was a product of her childhood experience of the Siege of Florence, during which she was taken hostage. “She experienced firsthand {the effects} of warring parties,” Cavini said, “and I think this made a deep impression on her whole life—through trying to stay in the middle, trying not to take sides, to please everyone … like Florence itself today. And hospitality is part of this.”

Submissions for the Apicius conference may be sent to conferences@fua.it.

Cavini will discuss the legacy of varied Medici women in a presentation of her book at the British Institute (6pm, January 30.)