For decades, Maremma in southern Tuscany wasn’t on most tourists’ radars. Like so much of the countryside, it attracted a few in-the-know Italian tourists and some intrepid Germans looking for a cheap place to tour their camper vans. Then we all discovered the Saturnia hot springs.

Even if you’ve never heard of the Maremma, there is still a very good chance you’ve heard of these hot springs fed by a rushing waterfall that pours litres of 37°C water into naturally formed travertine pools. In the ultimate embodiment of Italian laissez-faire, these hot springs are open 24/7 and free for anyone who wants to take a dip. But not for long. The local council plans to introduce restricted opening hours and an entrance ticket in 2020. Branded as a “symbolic gesture”, it’s likely to be 5 euro per person.

Antonio Sestini first visited the Saturnia springs 19 years ago. A retired schoolteacher from Milan, he is technically a tourist but considers himself an adopted local. Every summer, he returns to the area and takes up residence in the bar across the water in what he likes to call “his seat”. The Cascate del Mulino are in the middle of nowhere and, like your average beach or river, have no public facilities, so this coffeehouse is a meeting place for visitors desperately seeking an espresso and, more often than not, a toilet.

“It’s hard to overestimate just how popular the Cascate del Mulino have become. A couple of years ago, we had the odd visitor. Now in summer, hundreds of people come every single day,” Sestini says.

With a full grey beard and a round stomach, he can chat to the visitors in Italian (or halting English) for hours. “Sometimes I tell them about the history. They can’t believe such a beautiful place is free,” he explains. 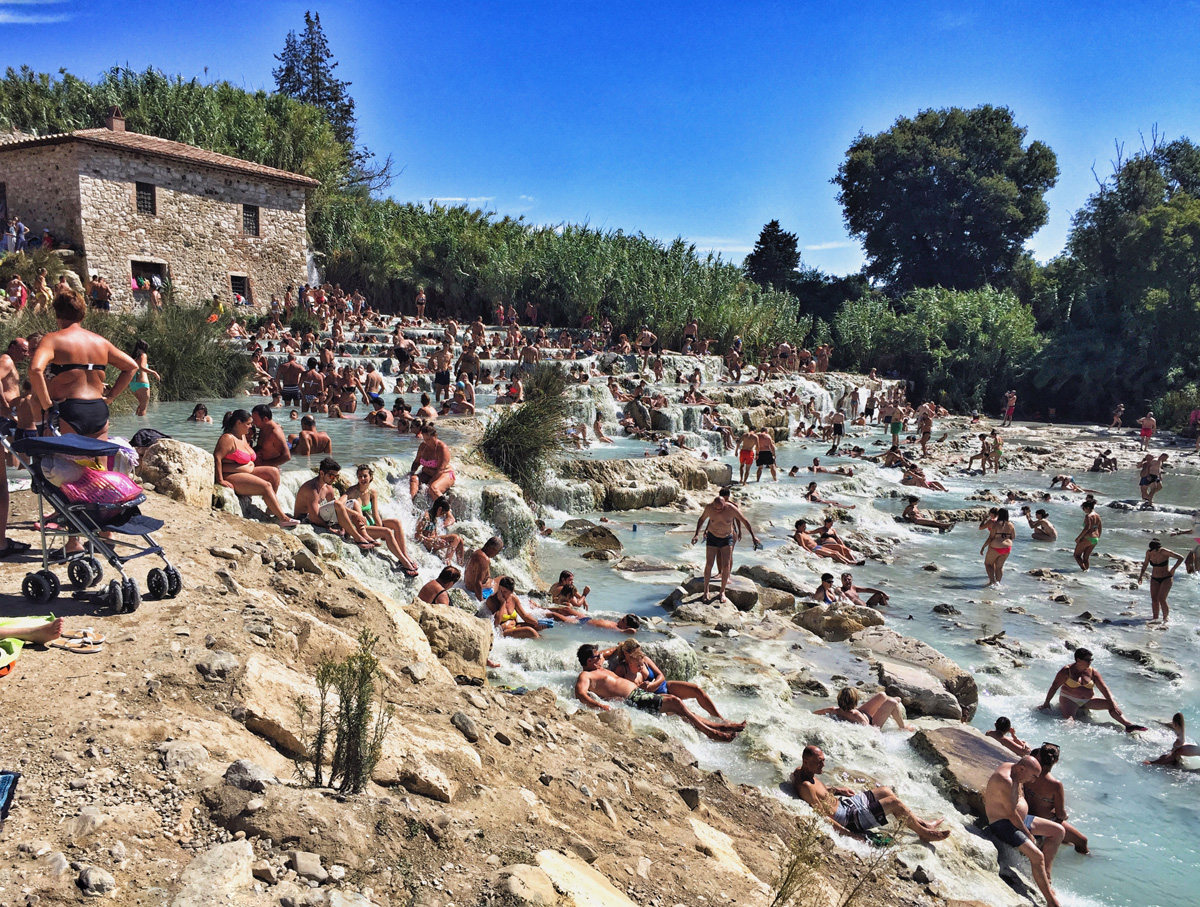 Since exploding onto the international stage, the Saturnia location has graced publications like Lonely Planet, CNN and the New York Times, all of which have touted it as one of the world’s most beautiful free hot springs. And while there have been issues with crime, overcrowding and rubbish (in 2016, I penned a piece for this publication about some of the problems), the overwhelming sense of the 4,000-plus reviews on TripAdvisor is one of wonder. People are enchanted by the idea they can visit whenever they want and not pay a euro cent. It’s the reason they come.

A town meeting was held recently to discuss the new ticketing system. (In the interest of full disclosure, my husband is the opposition assessor for the council that includes the Saturnia site.) The mood was one of concern. The rumour mill has run wild over the past few months and the question on everyone’s lips was, “Are the hot springs going to be privatised?”

The history is long and convoluted, a.k.a. typically Italian. Manciano’s former mayor Rossano Galli summed it up for us at the town meeting. “The water belongs to the public, but the land around the hot springs is privately owned,” he explained. “The last administration mapped out a five-year agreement with the owners, so the land and the springs would remain open and free to the public.”

That arrangement expires soon and the council hasn’t announced plans to renew it with the landowners, the Terme di Saturnia, a luxury spa complex a couple of kilometres down the road, which sits on the source of the hot water that flows out of its property down a river called Il Gorello and into the waterfall that feeds the hot springs. The Terme di Saturnia was sold to the American fund York Capital in 2017, together with Italian real estate investment and advisory company Feidos, for 40 million euro.

This all sounds terribly trivial, but for the locals free and open access to the Saturnia hot springs is fundamental to the area’s survival.

Donatella Borghetti is originally from Bologna, but moved to the area in the 1990s. Like so many “expats”, myself included, she was enchanted by the Maremma’s natural beauty and Saturnia’s hot springs specifically. In her early fifties, Borghetti has a shock of bleached blonde hair and a restless attitude. She’s a retired journalist and is constantly riling up the locals with her often leftist battle cries.

“The spirit of the Maremma is wild and uncontained. The hot springs embody this. That something so beautiful is free, it’s like our gift to the world. It emphasises the naturalness of the site. Introducing a ticketing system would spoil the sensation.”

It’s hard to overestimate just how important Saturnia’s hot springs are. As someone who has written extensively about them, I know tourists are infatuated. In the past decade, the number of visitors to the council has doubled to more than 200,000 annually. While there aren’t any studies, it’s safe to say they’re coming for the hot springs. As the number one tourist attraction in the Maremma, their existence draws visitors not only to the local area but to the wider province as well.

The new ticketing system would restrict the number of visitors to just 400 people a day with a heavy preference for locals and tourists sleeping in the Manciano municipality. The council has not publicly spoken about whether money from ticket sales would be spent on the site or given to a private entity.

“It’s the first step to closing the hot springs for good,” huffs Mara Redi, the owner of a small B&B near Saturnia. She transformed the old family farm into tourist accommodation when she noticed how many people were visiting the hot springs. “First they introduce a ticket. Then they reduce the opening hours and then they put a big fence around the entire site, so no one can swim in the water.”

Redi isn’t the only person who thinks this. A lot of locals at the town meeting were saying the same thing. For the time being, this is only a rumour, but it is one being fanned by mayor Mirko Morini’s silence—I reached out to Mr. Morini, but at the time of publication he hadn’t responded to my requests for comment. According to an article published in local newspaper Il Tirreno, the council is said to have commented that their plans for Saturnia’s hot springs were “top secret”.

None of the other locals interviewed for this piece were encouraged by that, Antonio, Donatella and Mara included. “Whenever someone says something is ‘top secret’, there’s cause for concern,” says Donatella. “We’re talking about hot springs, not nuclear codes.”

Antonio put it best: “Often we take for granted all of life’s little free pleasures, like going for a swim at the beach or walking through a forest. I think it’s the same for Saturnia’s hot springs. Having to pay for nature leaves a bitter taste in the mouth.”