Now, I see the sky in a different light. This weekend, I eyed up my terrace’s base-jumping potential and obsessed as a drone was piloted downriver. On Friday, I tumbled out of a plane at 4,000 metres on a tandem skydive, the most empowering experience in my life to date.

It started off as a Call My Bluff. One of the founders of The Florentine received the message. “Fancy doing a skydive?” For a month and a half, we sat on it. Then Giovanni upped the ante in a WhatsApp dare: Helen buttati!!! We walked on eggshells, not addressing the subject for a few days. Then I decided to bluff him back, which resulted in a date being set and no easy way out. Except down.

Leonardo’s partly responsible for this out-of-character decision. The five-hundredth anniversary of his death is forever on our minds this year—and, in this instance, the Renaissance genius’s penchant for flight. Leonardo’s friend and colleague Tommaso Masini is said to have tested the ornithopter over 1,000 metres near Fiesole’s Monte Ceceri nature reserve before landing abruptly, breaking a leg and putting an end to the first human flight in history. Moving swiftly on…

The experience starts as soon as you make the decision to go for it. Mind over matter. Belief over disbelief. There is no room for second guessing. Villa Strozzi Machiavelli is the hub of Skydive Dream’s activities, nestled in the hills of Bellosguardo, a 15-minute walk from Porta Romana. Established in the twelfth century as a watchtower protecting the south side of the river, the tranquil bed and breakfast calms your nerves as the professional team point out the landing strip in a clearing at the back of the villa. 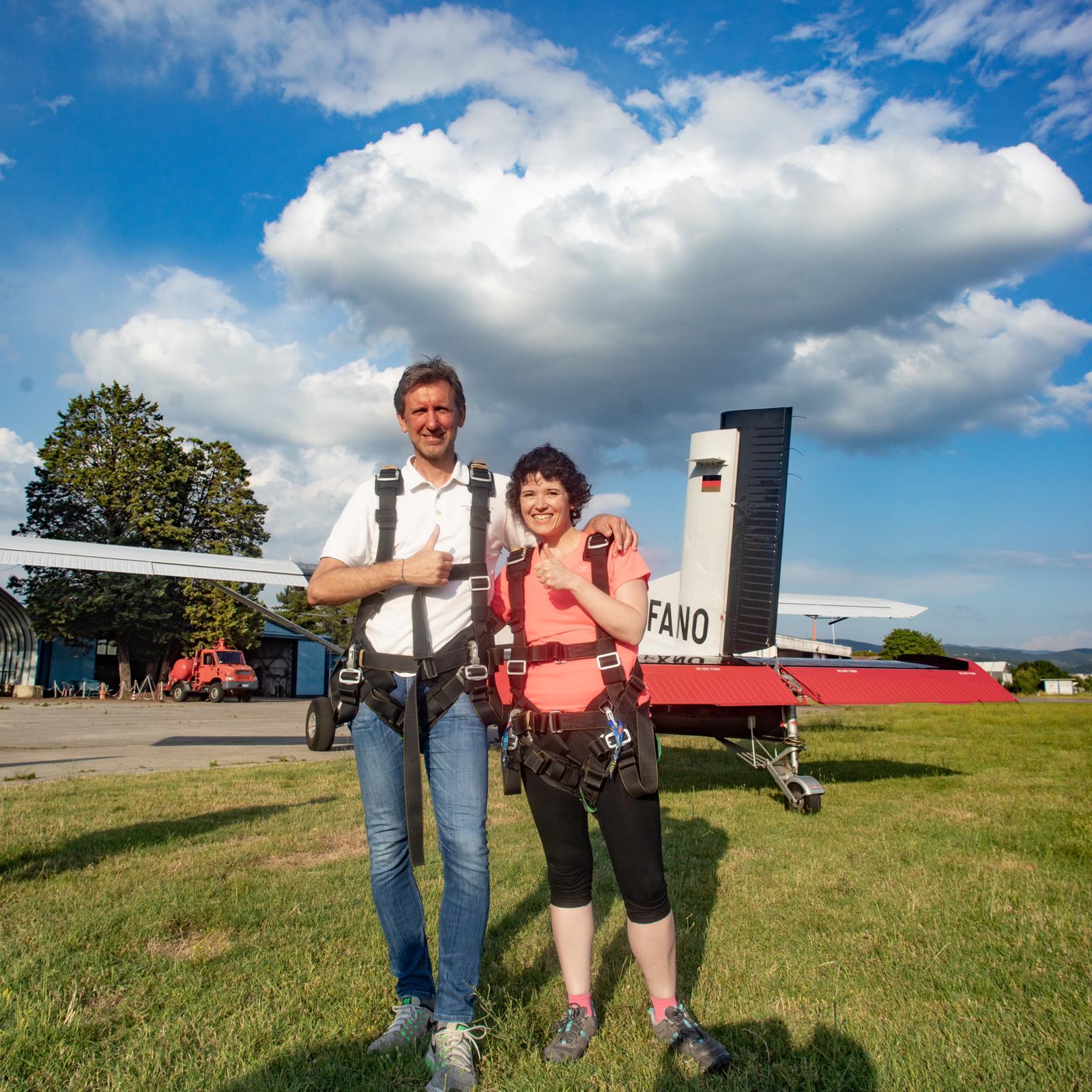 The Florentine‘s Giovanni Giusti and Helen Farrell before takeoff

We pile into a van with two Swedish guys who’d been nursing a skydiving dream for a while. “We always said we’d do it. We’re on holiday in Tuscany and this opportunity came up, so we decided to go for it to celebrate my thirtieth.”

Arriving at the airport (Arezzo for us, but it’s usually Florence), my instructor Francesco, the group’s only purebred Florentine, wastes no time fitting me into the harness, checking, double checking and triple checking the trussing before teaching the two positions to adopt in the air: a banana-like poise for the jump and a sort of star stance during freefall.

As the teeny plane takes off, the adrenaline strikes. Realisation dawns that there’s no turning back, that you’re voluntarily going to do something crazy. Twenty minutes pass and everyone’s bravado looks less convincing. Then the door opens, you give the thumbs up and you’re tumbling through the air. It’s disorientating, disturbing, real and unreal all at once. The air whips at your face and exposed skin, the goggles covering your eyes. During the 60 seconds of freefall, the earth looks no nearer and the feeling is more akin to floating than falling. Francesco taps my shoulders and I somehow remember to extend my arms and legs in a take on Titanic. Recalling his words in the briefing, I do my best to embrace the air, not to tense and resist it. Meanwhile, cameraman Max, a celebrity in the extreme sports world, has appeared out of nowhere. We exchange a high-five midair. I’m smiling and laughing, and loving every split second of this crazy adventure. 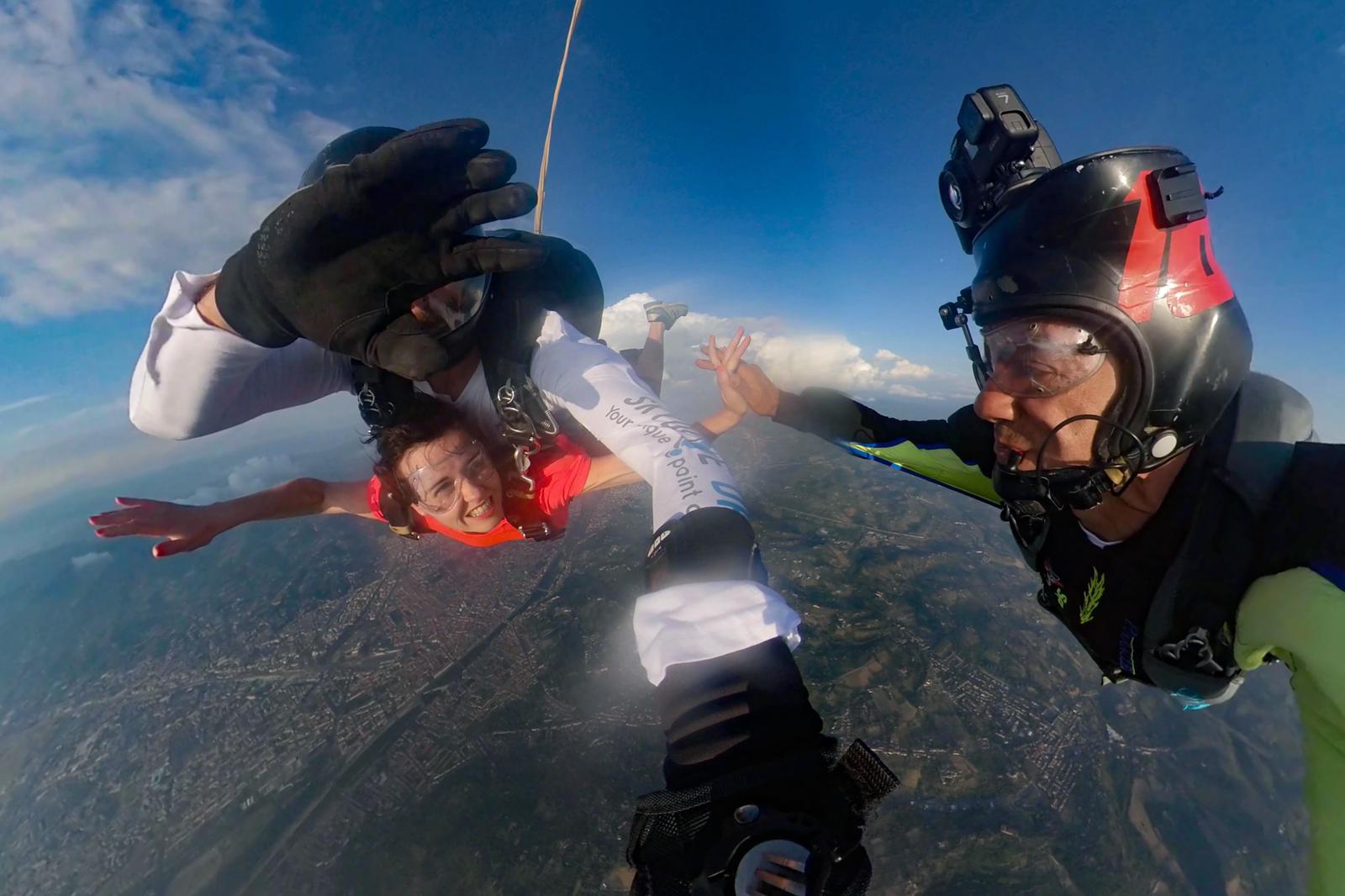 “Turn, Helen, turn,” I hear Max say. “Welcome to Florence!” And there she is, in all the city’s unfathomable beauty. The Duomo is a fingertip away, as if I could reach out and caress the lantern shining like a second sun in the evening light. The Boboli Gardens unfurl in their perfect green symmetry. The Arno meanders meaningfully, the city’s lifeblood, into the distance. My voice breaks and the tears soothe my wind-whipped cheeks.

Then something extraordinary happens. Francesco deploys the canopy and we shoot up in the sky, springing into a vertical position, like Lisbon’s Cristo-Rei or one of Florence’s countless crucifixes. The world stops for a long second. It’s silent and unnerving. It’s a feeling I’ve never experienced before: absolute peace, a rebirth, my own personal renaissance.

Now, it’s my turn to take control. Pulling the left handle hard down makes us turn left, the other right. My instructor takes back the reins; we’re twisting and turning over Florence and the land comes closer. The terracotta roofs yield to cypress trees lined like dominoes and pools glistening with summer promise. “Keep your feet up,” encourages Francesco. And we’re down, back on terraferma in disbelief at what just happened in those six minutes from jumping to landing. 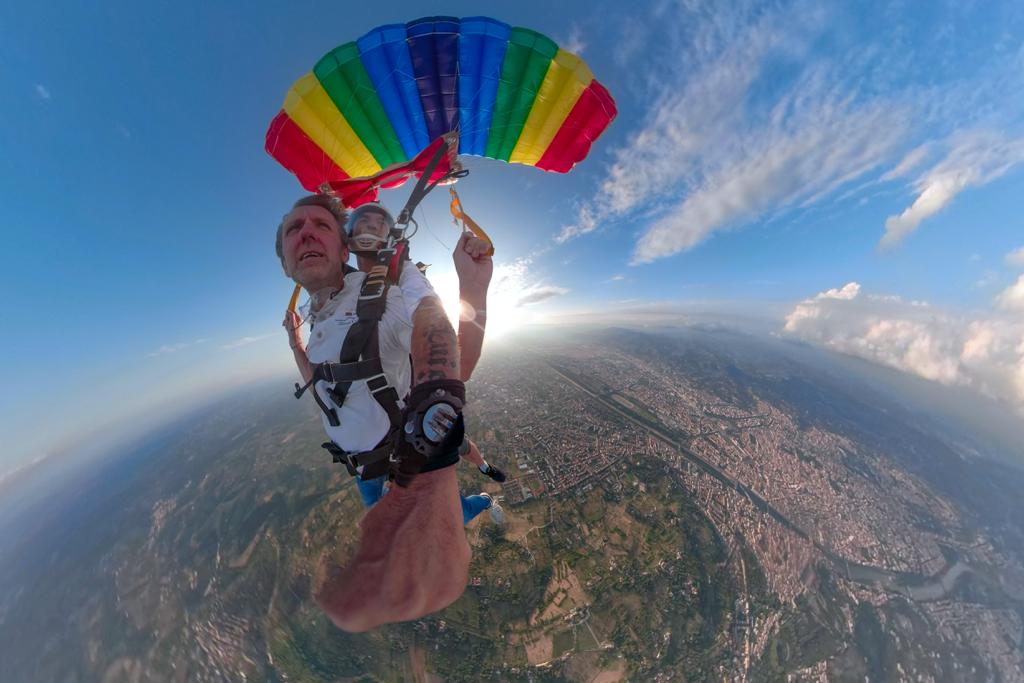 Skydiving over Florence is an exhilarating experience and a subjective one too. My feelings differ from Giovanni’s—he had to watch as everyone bailed out before him.

“I saw six people be sucked into the air, like a vacuum cleaner gobbling up a dust ball. It’s just not possible, I thought to myself as my turn came. I couldn’t believe that I would make one step and end up in freefall. But that’s what happened. I crossed the threshold and felt like an insect in a storm, turning, twisting, upside down, out of control, until I was parallel with the ground and I started to enjoy the experience.”

“The first thing that I felt was the density of the air: it was like being dipped into a cold liquid; I’d never experienced air as such a dense fluid. Then there was this tremendous feeling of freedom and communion between the sky, earth and myself. It all changed when the canopy opened: a blow, lifting, silence and my feet dangling over a miniature Florence: the Cathedral, Santa Maria Novella and the Boboli Gardens. I would never have imagined that I could have pointed at such beauty with my big toe. What remains is the desire to do it again and the feeling that our outlooks are too limited.” 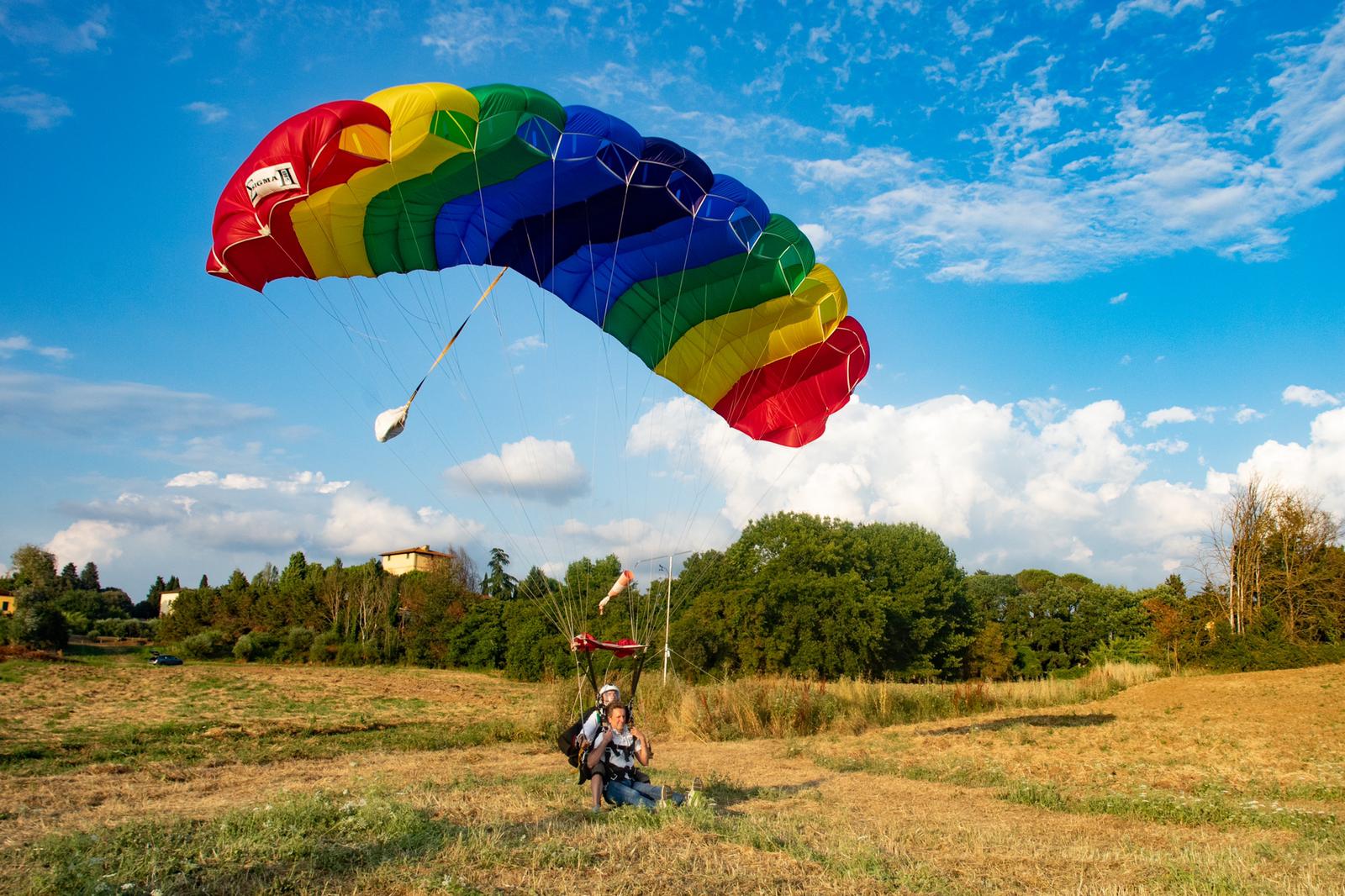 Over an IPA beer produced from the hops grown by the landing strip, Skydive Dream’s founder and director Max Haim explains how he began skydiving. “I was 19 and bored out of my mind lying on the beach in Cinquale. I looked up and saw these guys in the sky, so I decided to go for it. My first jump was a tandem.”

Back to Leonardo. He’s attributed with saying the following words: Once you have tasted flight, you will forever walk the earth with your eyes turned skyward, for there you have been, and there you will always long to return. Perhaps the history books mixed things up and that the polymath might actually have flown that machine himself. 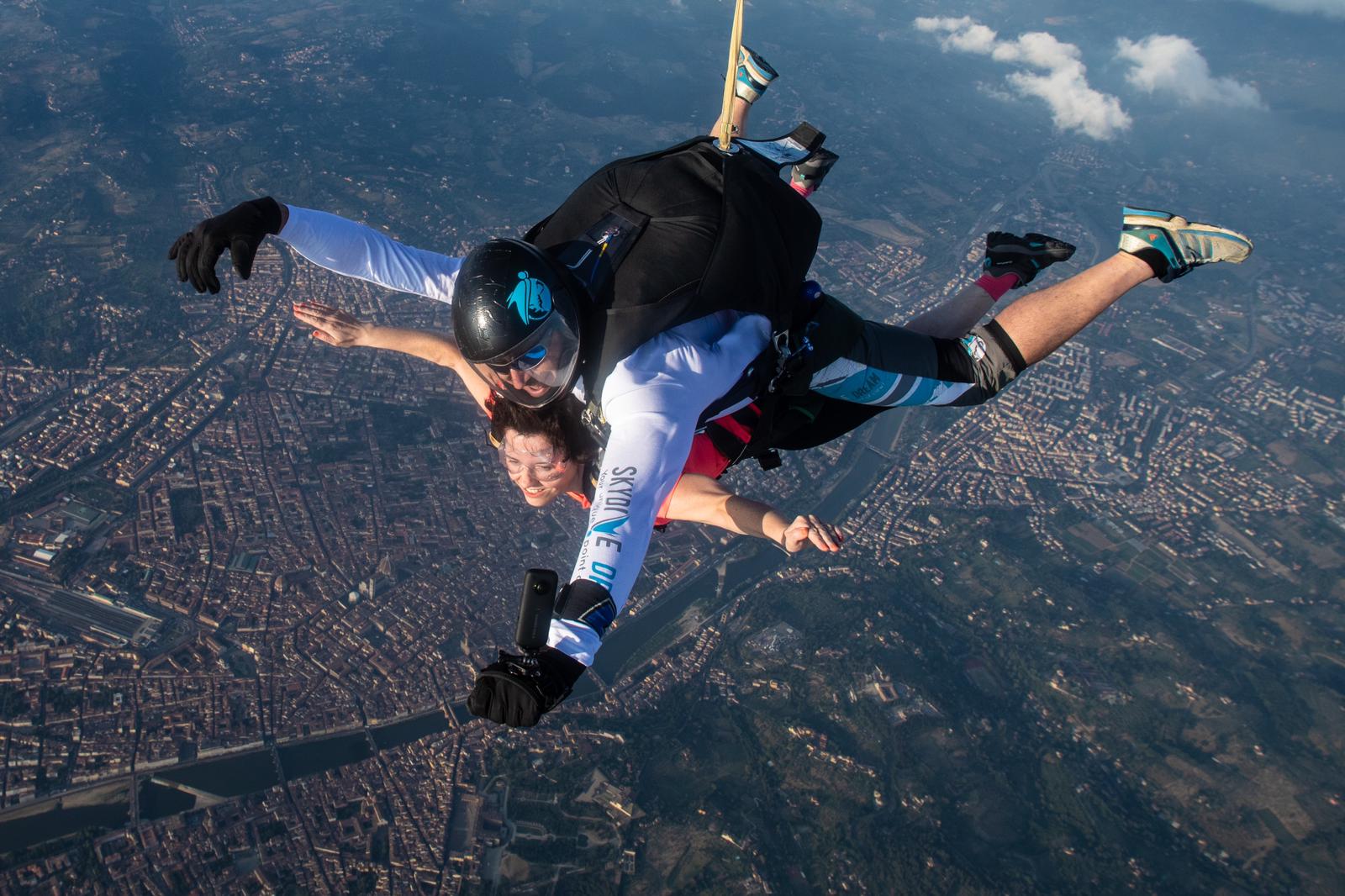 During freefall over Florence

The Florentine’s editor in chief Helen Farrell and co-founder Giovanni Giusti were guests of Skydive Dream Florence (www.skydivedream.com). Tandem packages start from 299 euro through 599 euro for comprehensive video and photography.