Rethinking the future of Florence

The Florence of the future must be more intelligent, inclusive and greener.

Bringing residents back to the centre, a greener, more intelligent and family-oriented city are among Dario Nardella’s plans to rethink Florence for the future.

On Wednesday, May 28, the Mayor of Florence outlined his reflections during a 45-minute speech in the Hall of the Five Hundred at Palazzo Vecchio, the first event held in the inspiring space since lockdown.

“Florence has reawakened from the slumber of the pandemic like a beautiful animal,” Nardella began in front of a full house of journalists and dignitaries. “The boat of our administration will chart new courses, but the destination has not changed: a liveable city, which takes care of its citizens, a sustainable city, a capital of a knowledge economy and technological development, which counterbalances the city’s inevitable character as a tourist destination.” 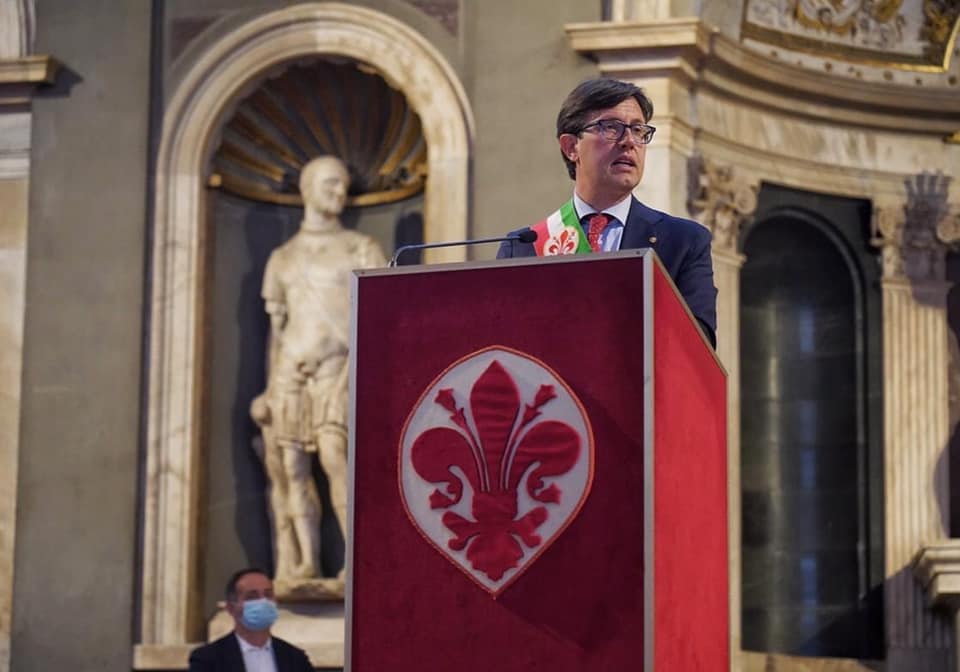 On Wednesday, May 28, Mayor of Florence Dario Nardella outlined his Rinasce Firenze plans during a 45-minute speech in the Hall of the Five Hundred.

While the city council will continue its agenda, titled Rinasce Firenze, a citizen-based model has been introduced to collect ideas through the active citizenship of Florence residents and stakeholders. Nine thematic areas are the focus for the gradual reactivation of Florence’s social fabric, economy, services management and the use of public and private spaces: Polycentric City; A New Historic Centre; Green Spaces; Green Mobility; Economic Development; Culture; Families and Children; Welfare, Work and Homes; An Intelligent City.

“Fully aware of the critical dimensions that this crisis brings, the challenge is to embrace this moment as an opportunity…to devise and create a new model of social and economic development for the city, which holds together its more traditional vocations of culture, art, tourism, industry and manufacturing with renewed functions as a smart city, whereby artisan workshops, biotechnology, modern enterprises, infrastructure connecting and supporting businesses, research and professional training centres, selected tourism and high technology can co-exist and fuel one another… The Florence of the future must be more intelligent, inclusive and greener.”

“What’s happening is that the health emergency is becoming a social, economic and labour emergency,” stated Nardella. The figures speak volumes: the City of Florence handed out 7,000 food vouchers to the impoverished in the early days of the epidemic and received 3,500 applications for rent subsidies, more than triple the usual amount. In a recent survey, 77 per cent of Florentines expressed their worry for the economic predicament and one in four Florentines says that they have no intention of eating out at a restaurant in the near future.

On tourism, Nardella acknowledged past failures to combat overtourism. “The current phase has made us realize just how fragile the tourism model we’ve developed over the years actually is in terms of the city’s economy. That’s why we need to pinpoint new tourism flow models, encouraging more informed, responsible and sustainable tourism that’s less fleeting, based on a new pact of coexistence between the tourism world and the city.”

The City of Florence currently faces a deficit of 200 million euro, in addition to losses in the range of 6 billion euro in exports and a billion euro in tourism. To this end, an international crowdfunding campaign is expected to be launched shortly. “Florence needs the world, for the world still needs Florence,” Mayor Nardella reiterated his predecessor Piero Bargellini’s words, in the aftermath of the devastating 1966 flood.

In an interview with Italian newsletter Corriere della Sera, Nardella laid out his intention to go on a “long world tour” as soon as travel restrictions are lifted to secure private funding, with China as the first stop. “China has been the country that has been most supportive of Florence, quickly donating masks and respirators.” The United States, Japan, Hong Kong, Taiwan, India and the UK are also on the mayor’s list of destinations. “Fondazione CR Firenze, Morgan Stanley and some Russian entrepreneurs have also made contributions.”

Florence is in our hands. Make your contribution here.