Never-ending renaissance along the Etruscan Coast

“It’s the place with the beaded curtain,” replied the local teenager, as he tucked into the elusive Livorno-style baguette we were trying to track down. Our appetite had been piqued by an early morning run along the meandering seafront further south in Castiglioncello, our chosen hidey hole for the summer. The Florentine savoured the summer sun along the Etruscan Coast on behalf of Toscana Promozione Turistica, Tuscany’s regional tourism board. 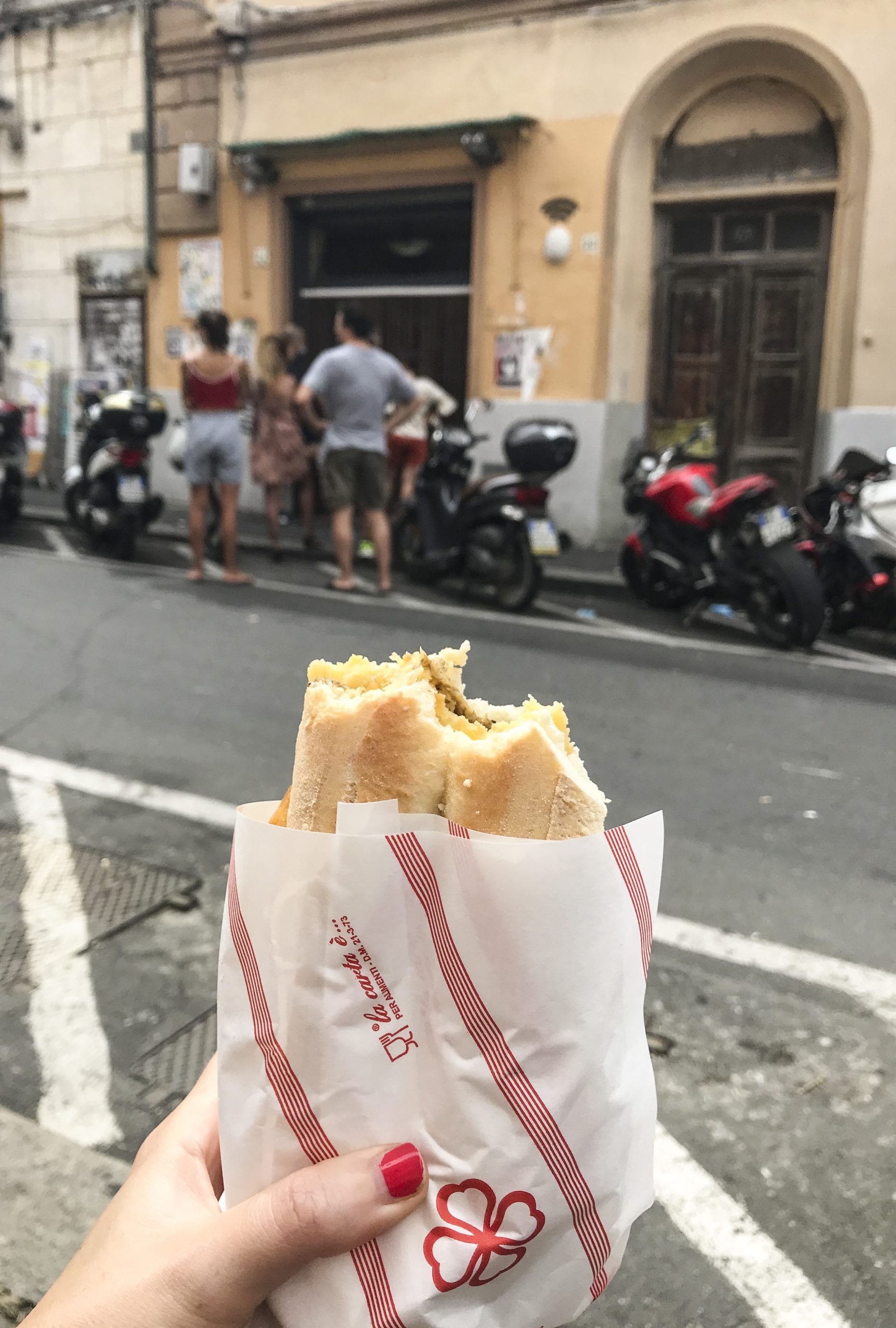 You never forget your first 5e5. A Livornese street food, the speciality is essentially a chickpea pancake served in a baguette with an optional extra of garlicky aubergines and washed down by a spuma bionda, a soda with a hint of lemon and spices. The oddly named bun dates to the 1930s when bread and chickpea pancakes both cost five lira cents, meaning that customers would ask for “5 of pancake and 5 of bread”. Watching the cooking in progress sets the taste buds salivating: paella-like pans are filled with chickpea flour, water and olive oil, left to bubble and set. Legend has it that a Genoese ship transporting prisoners from Pisa started to let in water following a storm off the Livorno coast. The chickpeas in the hold mixed with the saltwater and oil that had leaked from a barrel: out of desperation, the sailors were forced to eat the paste in order to survive. They quickly learnt that it improved when left to dry in the sun. Either way, it makes for a flavourful and filling lunch; no wonder the local youngsters continue to devour it.

Bellies full, we stocked up on groceries at the striking Vettovaglie central market with its airy aquamarine-edged ceiling and large rounded windows. Designed by Angiolo Badaloni in the late nineteenth century, the historic market is an invitation to cook and eat due to just the right number of stalls and the clever separation of the fish hall, with its self-draining floor, from the adjacent fruit and vegetable hall. The current circumstances don’t allow it, but you really want to trail a hand across the original, cold, Carrara marble counters. Freshly baked fig cantucci cookies, oversized Livornese eggs with their uber-yellow yolks and fit-to-burst plums in the bag, we signed up for an evening boat tour. 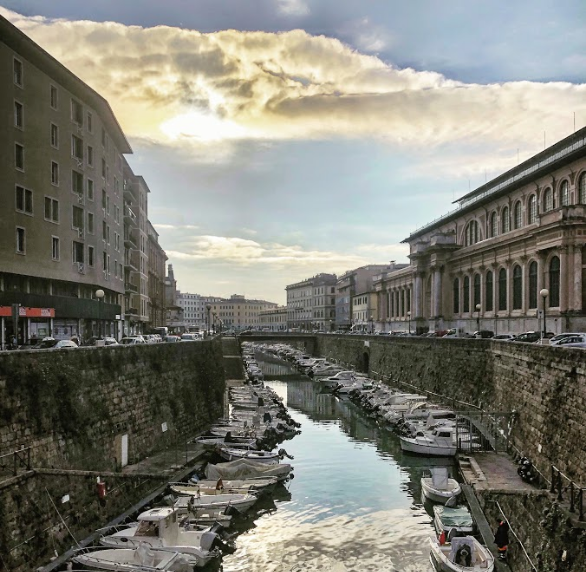 A couple of hours to kill, we explored the nearby winsome Venezia neighbourhood, lined with waterside eateries just opening for the evening, provocative street art and landmarks like the octagonal Santa Caterina church, which is worth the visit to gaze at Giorgio Vasari’s luminous altar piece detailing the coronation of the Virgin Mary. Behind the church, things get a little grittier, a trademark of this port city, with the former convent and later prison where Sandro Pertini, president of Italy from 1978 to 1985, was imprisoned during the Fascist era. On a lighter note, this picturesque area of Livorno is home to the cultural showcase Effetto Venezia (August) and culinary event Cacciucco Pride (September).

Back at the market, we head down the marble-fronted staircase into the bowels of this functional space, long corridors leading off to storage areas as we approach the subterranean moorings. Our guide unlocks the salt-rusted gate and loaded the boat for our foodie boat tour with Bolgheri red wine and bread rolls spliced with cacciucco, the city’s hearty fish stew. “That’s cacciucco, with five C’s, so called because it’s just like Livorno. Cacciucco means a melting pot, an amalgamation of cultures.” That’s something we learn all about, setting sail along the Medici-designed Fosso Reale (the royal trench) past the Dutch Church, the medieval fort and the newer one, before chugging beneath piazza della Repubblica, the 220-metre long bridge-square. We find out that, unlike the other cities in Italy, Livorno chose not to have a ghetto, instead welcoming Jews to the city, alongside an endless number of other nationalities: English, French, Greeks, Armenians, Spanish, Swedish, Austrians and so on.

“The very tall houses, the facades tinged in blonde plaster, where pink and green blend together, shine in the sun with golden and verdigris reflections, like the canal water scattered with splashes of oil. The shutters are the colour of dried leaves, dim and dusty. A feeling of tired nobility, freedom of the people, lies in the smooth and open architecture of these homes, the most beautiful in the Mediterranean.” 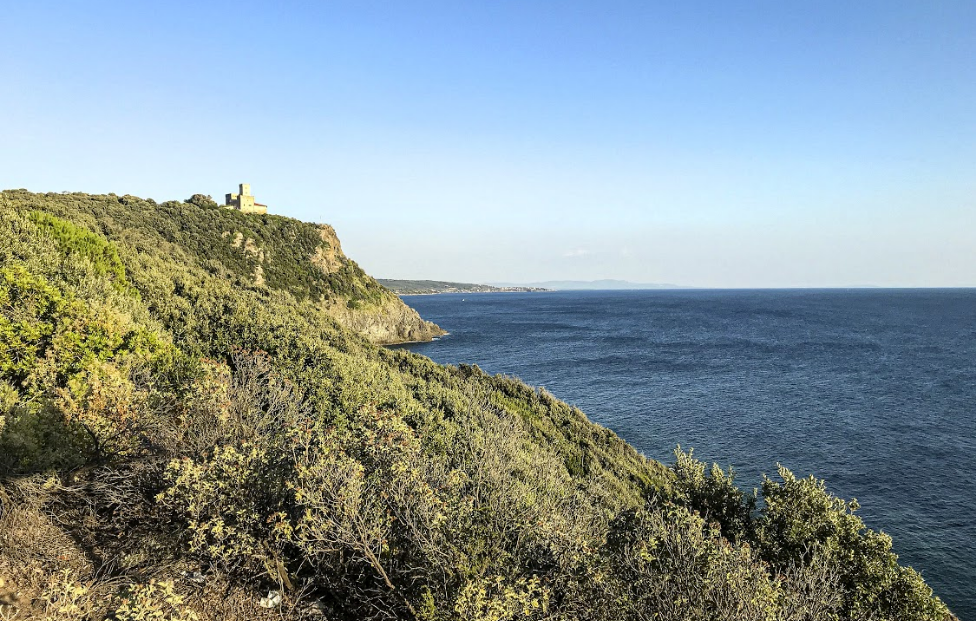 A view of Castello Sonnino

Southeast of Livorno, a winding road takes us to the quietude of the Montenero Sanctuary with its soothing architecture and astonishing views over the blue Mediterranean as far as the island of Gorgona. Hikers relish the climb up from Antignano train station or the rocky bathing of Calafuria, while all visitors, young and old, are perennially charmed by the claret and cream funicular railway, which costs just 1.50 euro per ride. Nestled at 300 metres above sea level, atop the hill of the same time, the fourteenth-century sanctuary holds a special place in the hearts of Livornese locals. It’s said that the icon of Madonna delle Grazie protected much of the city during the 1742 earthquake, a miracle that the citizens still remember to this day, feasting and never celebrating on January 27 every year. Home to Benedictine friars of the Vallombrosa order since 1793, the place of worship has always known how to stay timeless and in step with the times, holding regular religious services, which are now also live streamed on the Sanctuary’s Facebook page.

The drive south along the coastal Aurelia road is one of the most scenic stretches in all of Tuscany, especially at sunset. Sonnino Castle dominates the cliff and elicits romance and fear in equal measure. Privately owned and not open to the public, the crenellated edifice is the result of an expansion by Baron Sidney Sonnino, statesman and former prime minister of Italy, who decided to take up permanent residence here; he actually went one step further as his will commanded that his body be sealed in a cave beneath the house. One can only imagine the statesman’s journeys along what must have been a winding track on the inkiest of nights in the nineteenth century. 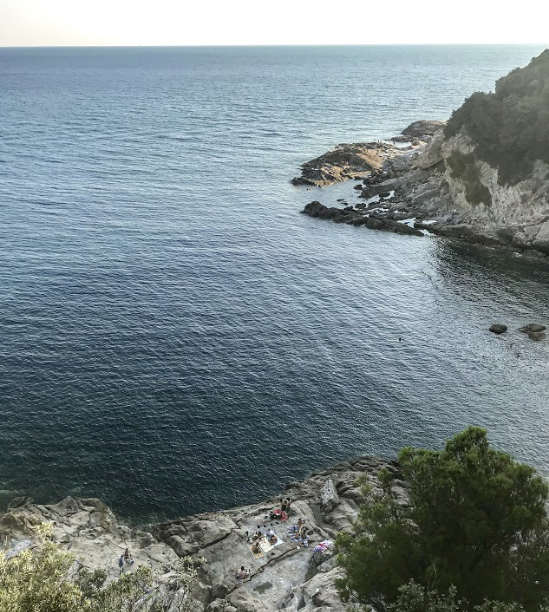 Half an hour later and we are greeted by the Quercetano Bay, the gateway to gorgeous Castiglioncello. Decadent villas line the road as we are reminded of this seaside resort’s golden days back in the Sixties when movie stars like Alberto Sordi and Marcello Mastroianni holidayed here, inspiring classic films such as Dino Risi’s Il Sorpasso with Vittorio Gassman and Jean-Louis Trintignant. The charms of Castiglioncello remain intact today: from the luscious pine wood, elegantly plentiful with family entertainment, to the Castello Pasquini, a top local concert venue, the outdoor cinema with nightly showings, and restaurants a plenty. The town’s standout feature is the coastal promenade, a perfect three-kilometre walk from the westernmost rugged Punta Righini to the ultra-modern tourist marina of Cala de’ Medici, and even beyond to Rosignano Solvay. The seafront retains a balance of bathing establishment and nature: I Pungenti are the perfect example, as bathers set down their towels on the age-old reefs. Plus, there’s something special about the light in Castiglioncello, which explains why the Macchiaioli art movement took shape here in the mid-nineteenth century, inspiring the likes of Giovanni Fattori, Silvestro Lega and Telemaco Signorini to paint the sheltered coves, maritime scenes and nearby hills with their unique use of colour and chiaroscuro. 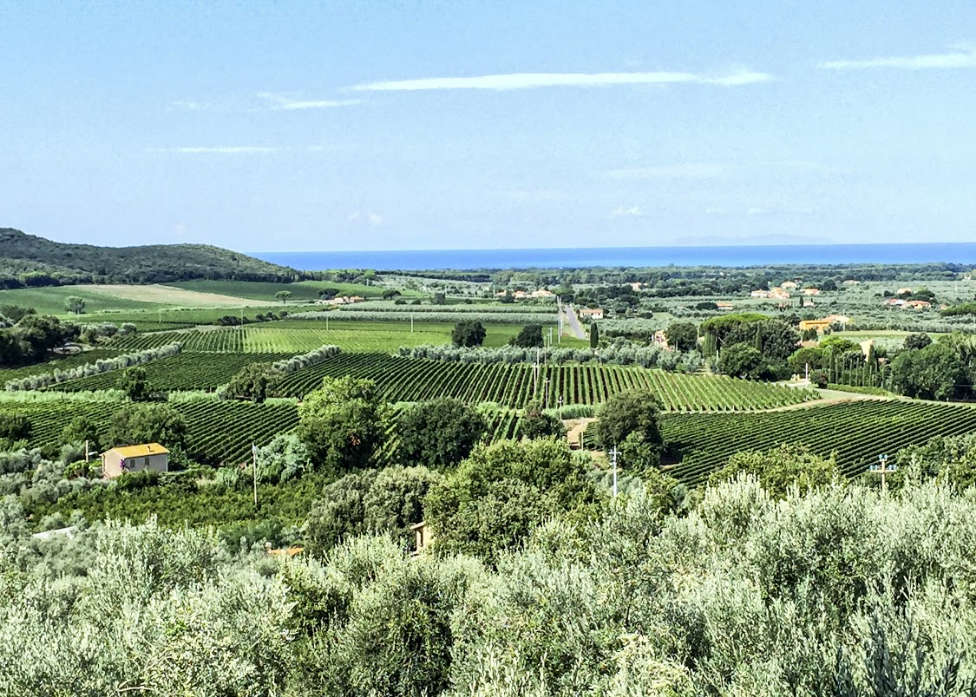 International varieties growing by the sea in the Bolgheri wine region

While taking a dip in Castiglioncello’s waters is highly recommended—the coastline here has some of the cleanest and clearer waters around thanks to the rock pools, as certified by the numerous Blue Flag recognitions—if sand’s more your thing, venture south to the beaches of Vada, Cecina or Marina di Castagneto Carducci. The sandy expanses along the Tuscan coast offer something for everyone, from dedicated naturist beaches and dog-friendly shores. Since we’re in the area, lunch in the hilltop town of Castagneto Carducci was a must, a smorgasbord of specialities such as pappardelle pasta with wild boar sauce and tomato-topped toasts just warm from the sun. The wineries of Bolgheri were just down the road, providing insight into family-run cantine and larger multinationals, all shaping ageworthy wines from international grape varietals. 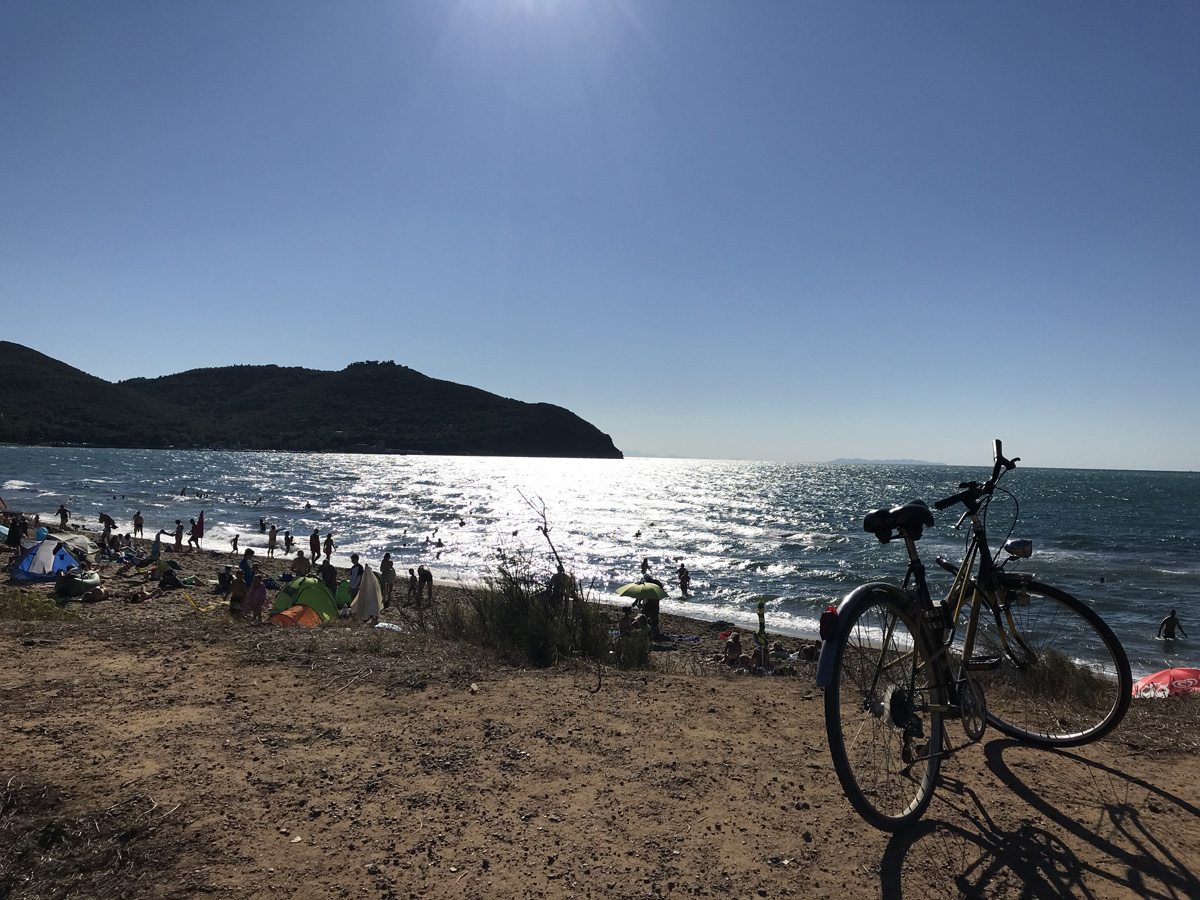 The Gulf of Baratti and Populonia are the reason why this swathe of the sea is known as the Etruscan Coast. Renowned since antiquity for the mining associated with the iron industry, the archaeological park encompasses the Etruscan and Roman settlement of Populonia. A stroll around the sun-drenched area feels like stepping back centuries as burial mounds of varying sizes rise up next to the Mediterranean shrubs and dense woodlands. Riding an e-bike along the Baratti coastline is an invigorating experience as the sun sets over the sea with a singularly silver glimmer, a reminder of the riches brought to this zone by the metalworking of bygone years. It’s always been a never-ending renaissance along the Etruscan Coast, now more than ever.