Schiacciata on the streets of Florence

È un bicchiere di vino con un panino, la felicità. Happiness, as we know from Al Bano’s song “Felicità”, is a glass of wine with a sandwich. But the word “sandwich”, with its soggy connotations of cling-filmed little miseries, squashed at the bottom of a backpack, has nothing to do with the panino of Italian tradition. It might be in focaccia (or in Florence, schiacciata), it might be in rosetta, it might be in—perish the thought—a baguette. Whatever it is, it is certain to lift your spirits. 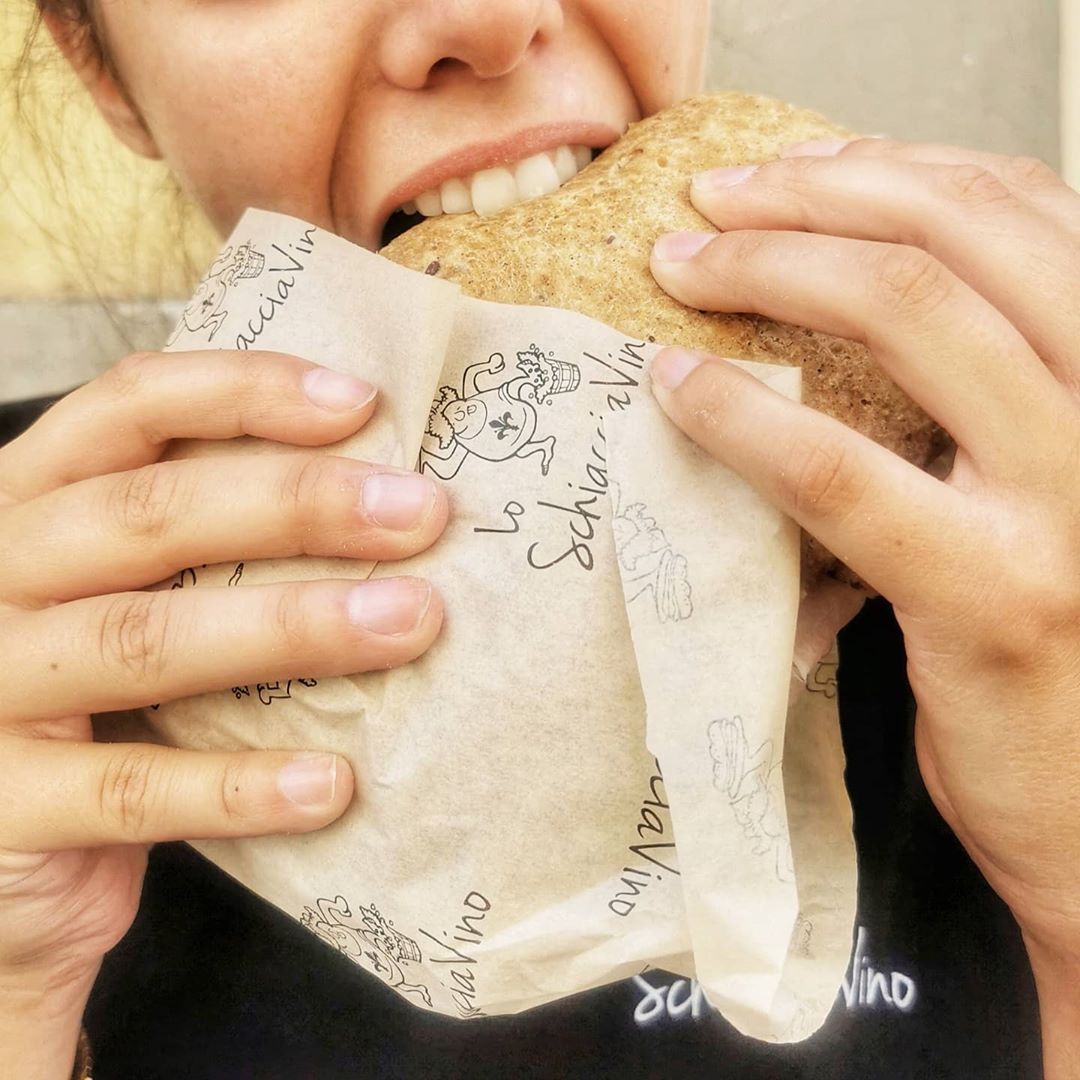 A few years ago, I was hosting a university friend of mine, who was then living in the outskirts of Milan, and she suggested that we go to her old favourite All’Antico Vinaio. It was my third month here but I had barely heard of All’Antico Vinaio, had certainly made no mental note of the name. We were lucky: the place was as queueless as I was clueless, or nearly, not that I appreciated the rarity of that. I can’t remember what I ate, though it definitely involved prosciutto and some sort of salsa, possibly made of truffles. What I do remember is that five euros bought me a lot of sandwich. It defeated me: about a third of it went in the fridge.

All’Antico Vinaio doesn’t need more press, but its name, like our opening lyric, suggests that panino and vino, the marriage of Ceres and Bacchus, are just one of those perfect matches. For all Antico Vinaio’s virtues, its wine list doesn’t compare to that of La Casa del Vino, a tiny room next to Mercato Centrale, whose walls are stacked to the rafters with the most fabulous-looking bottles. Idiosyncratic hours (9:30-15:30) hark back to the days when a lot of people—the workers who delivered food to the market, mainly—would rise at 4am: the Casa would be open for them at eight. And though opening times are now less monastic, the early-bird attitude survives. 10am finds me interrupting owner Gianni Migliorini in his panino preparation, but I’m soon joined by two older gentlemen in rather natty trousers. Gianni, who knows them well, pours a generous Chianti for each of them, though lunchtime is about three hours off. Do they come here every day? “Every day, no,” they laugh. “Maybe two or three times a week,” says one. “Just for something to fill a space.” 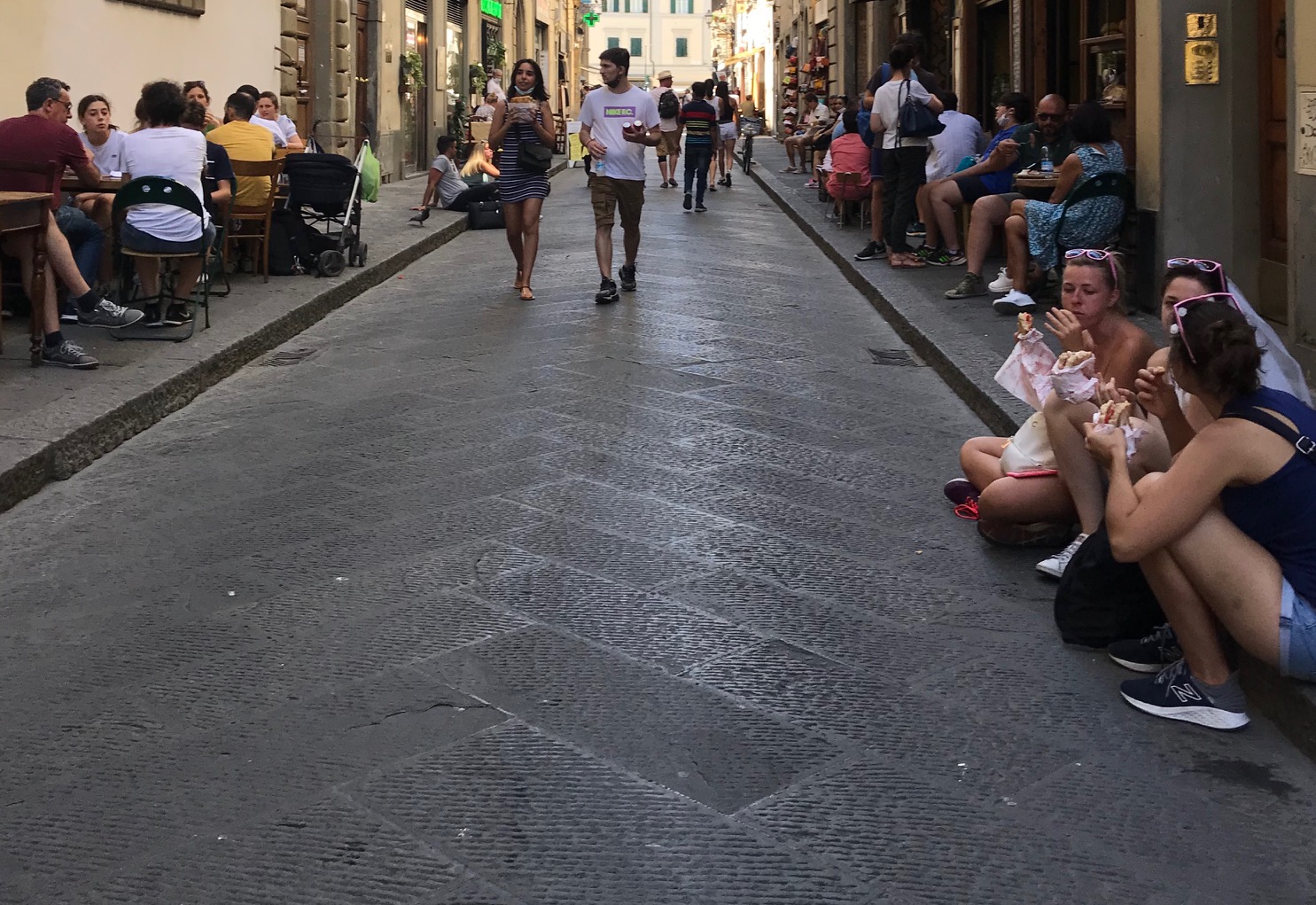 Via dei Neri, Florence, at the height of Summer 2020

And what a way to fill a space: Gianni’s panini represent tradition at its most uncompromising. Tripe and other innards go into many a sandwich, but no less Florentine, Gianni insists, are the mackerel and anchovies that go into others. “You always find the best fish inland,” he defies received wisdom. “The big cities get the pick of the delivery.” But, he gently reminds me, the fish he’s using have been preserved in oil; they’re not fresh, at least not like his bread, which comes from the bakery on the other side of the street.

What is and isn’t traditional is not as cut and dried as many Florentines would like to think, as I once discovered when I sought a consensus recipe for ragù bianco. But no one questions the indigenous credentials of lampredotto, and though this fourth ruminant stomach makes many a stomach churn, no one denies its popularity. Panini con lampredotto, the quintessential Florentine street food, sell from trippai or lampredottai food vans all over the city: piazza Beccaria, piazza Sant’Ambrogio, Porta Romana and Mercato del Porcellino, among others.

At the Porcellino trippaio I ask for anything that isn’t lampredotto, and the man hands me a delicious schiacciata with salami and a rebuke: “She’s having lampredotto,” he gestures to the woman he served before me. “Why aren’t you?” I redeem myself slightly by adding a one-euro cup of red wine. “Almeno quello,” he sighs. I feel frightfully native with my bicchiere di vino con un panino, and even if the panino isn’t quite the right one, I reason that a van that gets through roughly ten kilos of bread a day can put up with the odd dissenter. It’s hardly Florence’s only organ-ic success: Simone, who has run the trippaio in piazza dei Nerli for over 20 years, tells me that his business has only gone from strength to strength. It’s as if people are eating more sandwiches now than ever before, he observes. 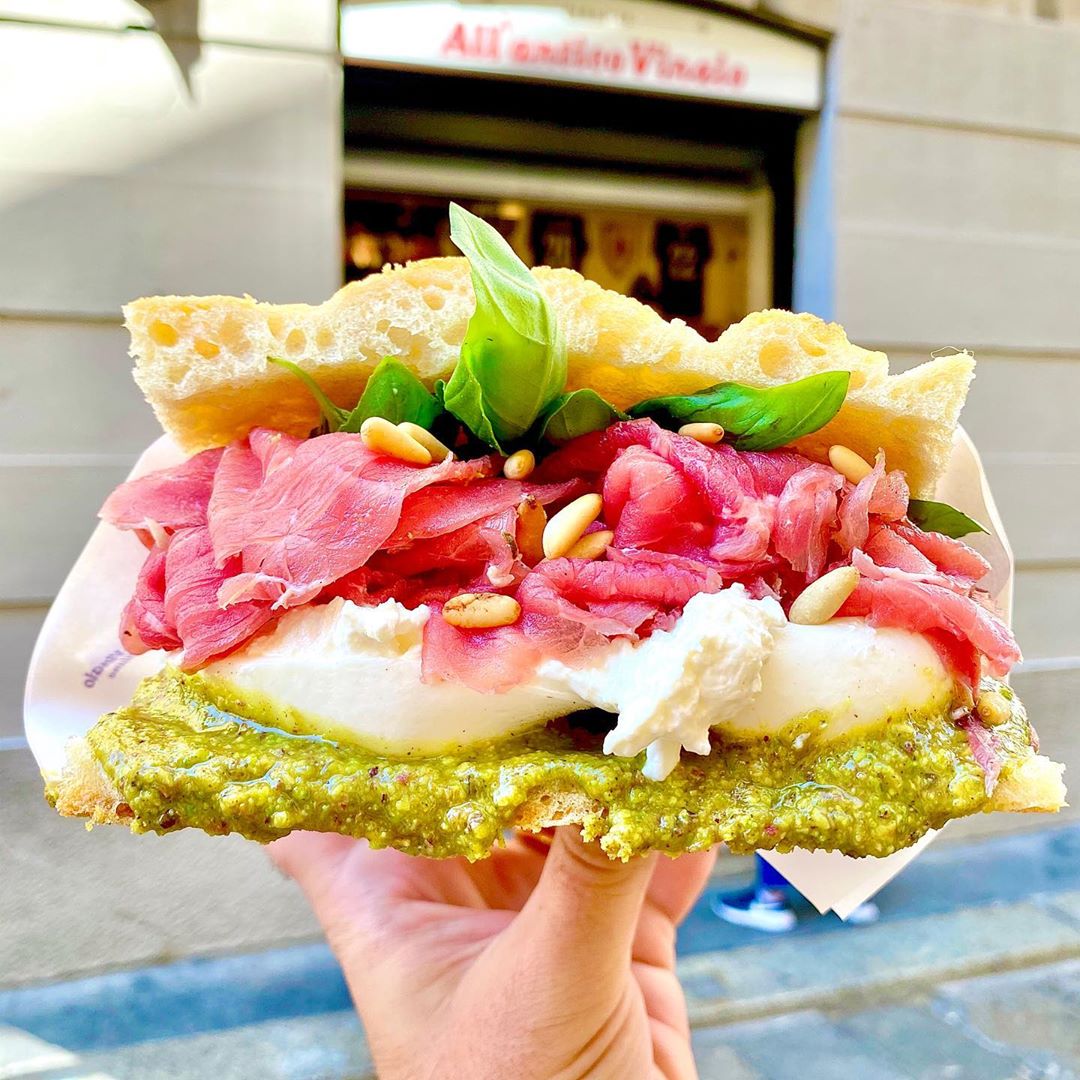 The number of tourists back in Normal Times might partly explain that, but not entirely. After all, says Simone, he sees the same familiar faces every day. Tourists love panini and schiacciata because they are portable and because it saves money on sit-down meals; Florentine residents, I suspect, love them because they save time. The Italian habit of long, leisurely lunchbreaks in a bar or trattoria, a jug of wine on the table, still goes strong in many quarters, but as more and more Florentines commit to white-collar work and international ambitions, the old venues perhaps seem just a little too much like a luxury.

Hence the panino has also crept into the evening meal. According to Emanuela, who works in via Gioberti at Schiacciavino (again, the bread and wine combination), later patrons treat the schiacciata and wine as their dinner, just as they would pizza and beer, aperitivo and spritz. Crucially, Schiacciavino customers sit outside; so do punters at All’Antico Vinaio and at the trippai, with their customary ring of folding chairs. As Covid-19 rears again and social distancing remains a worry, it may be that sandwich shops will thrive where restaurants will struggle.

The “no eating on the streets” city ordinance is back in effect along via dei Neri and its environs. Originally introduced in September 2019 and now in force until December 31, the rule prohibits stopping to eat and drink on pavements, steps and anywhere along via dei Neri, piazzale degli Uffizi, piazza del Grano and via della Ninna. Fines, which may or not be enforced by the municipal police, range between 25 and 500 euro.