There is one Florentine dessert I appreciate at a practical level because it is gluten-free by nature: castagnaccio. This is a dense cake made of chestnut flour and water with olive oil, rosemary, raisins and pine nuts. Born mostly out of necessity, castagnaccio was typically prepared as a poor man’s dish in the fall and winter when chestnuts are abundant in the mountains of Tuscany. Chestnuts were a fairly easy ingredient to forage and therefore became a staple for the humble Florentine families.

Making this gluten-free Florentine dessert in my small kitchen in Florence makes me feel like a true fiorentina, even if I’m still an americana in reality. Castagnaccio is an easy and delicious way to feel connected to Florentine culture. Your nonna may not agree, but there’s something to be said for honoring traditional recipes while exploring how to reimagine them in creative ways. So, you have my permission to make the recipe your own. If one of the ingredients doesn’t resonate with you, replace it with something more your style. Maybe try making it a few times each with a different variation to find what you like the most. This recipe is so easy to prepare even the novice baker should have no issues pulling it off! Without leavening, the cake will not rise, which is often the hardest thing to accomplish in gluten-free baking.

Optional add-ins: sprig of rosemary, handful of raisins, ½ cup of pine nuts and ½ cup of walnuts.

I’ve listed these as “optional” because people have contrasting and firm opinions on things like raisins and walnuts. The traditional recipe would include these ingredients, but this is your free pass to take a modern spin on the classic if your heart desires! You may even get creative and try something new (like dates instead of raisins, for example).

Preheat the oven to 200°C. Before going any further, make sure to rinse and soak your raisins in cold water. You can even add some vin santo to the water to give the raisins an extra kick. Set those aside as you go through the next steps.

Sift the chestnut flour into a large mixing bowl to make sure no lumps or shell pieces are remaining. Add a pinch of salt and combine.

Slowly and gradually stir in the cold water.

Add the raisins, pine nuts and walnuts into the well-combined batter, making sure to keep aside a bit of each to sprinkle on the top afterward.

Pour the batter into a 12-inch shallow oiled pan. (The recipe is traditionally made in a shallow iron tin, but I’ve found that it works well in a springform pan for easy removal.) You may need to tap it on the counter a few times to ensure an even surface. Sprinkle the rest of the raisins, walnuts and pine nuts on top. Finally, sprinkle the rosemary needles across the surface and add a drizzle of olive oil.

Bake in the oven at 200°C for about 30 minutes. You will know it’s done when little cracks begin to form on the surface.

The cake is very dense, so it is best served with some ricotta on top and/or vin santo to accompany it. I’ve even had it with some decadent mascarpone on top. 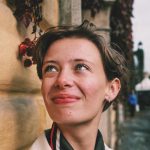 Catalin Varela is an American living in Florence. She was diagnosed with celiac disease in 2016 and has since become the founder of The Celiac in Italy). Catalin teaches online Italian cooking classes (all gluten-free of course), consults clients on traveling safely in Italy as a celiac, and is an English+Italian speaking resource for all things gluten-free Italy. 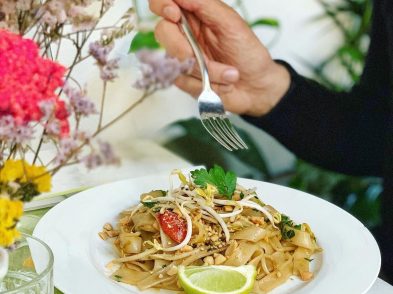 Italy may seem like the worst place for celiacs, but it is quite the opposite. Here are five gluten-free restaurants in Florence.