Debi Mazar, a New York native, made her feature film debut in Martin Scorsese's Goodfellas as Ray Liotta's junkie mistress. From that auspicious beginning, she went to work with such noted directors as Jodi Foster in Little Man Tate, Barry Levinson (Toys) and Woody Allen (Bullet's Over

New York native Debi Mazar made her feature film debut in Martin Scorsese’s Goodfellas as Ray Liotta’s junkie mistress. From that auspicious beginning, she went to work with such noted directors as Jodi Foster (Little Man Tate), Barry Levinson (Toys) and Woody Allen (Bullets Over Broadway). Mazar has also made her mark in the independent film world, co-starring in such off-beat films as Nick Cassavente’s She’s so Lovely and in Steve Buscemi’s directorial debut Trees Lounge. She currently plays Shauna, the fast talking publicist on HBO’s hit series Entourage and can be seen in the upcoming remake of The Women. Mazar also has a cooking show with her Florentine husband Gabriele Corcos, of UnderTheTuscanGun.com. The Florentine recently sat down with Debi and Gabriele to talk love, life and, of course, food! 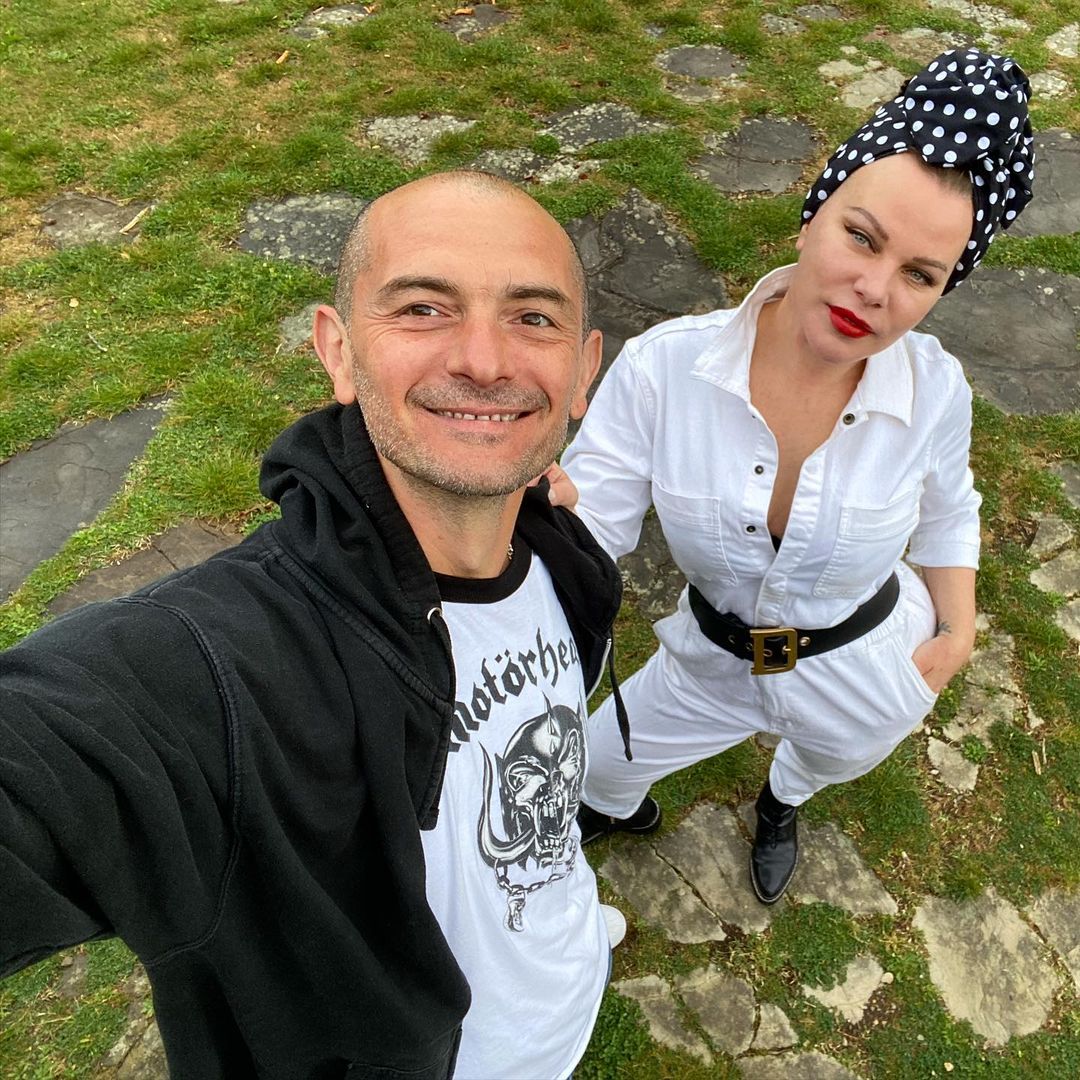 How did you meet?

Debi: I was on holiday in 2001, traveling through Europe. I stopped in Florence to stay with the French pianist Katia Labeque, who had a fantastic palazzo in Piazza Santo Spirito. She is an incredible, talented woman who likes hosting people; when we were introduced at Madonna’s wedding in Scotland, she invited me to visit her in Florence. That summer she was rehearsing with her classical orchestra and a jazz band. The house was filled with musicians from all over the world, filled with the sounds of violins, pianos and lutes. The kitchen was serving the best wines and Tuscan cuisine prepared by locals.

That’s where Gabriele and I met. He was working with Katia that summer. One night, we were seated next to one another at dinner. When we ran out of cigarettes, we took a walk to the piazza and ended up smoking and having a cocktail in Santo Spirito. We stayed there for hours and at some point joked that we should have a child together. He kissed me goodnight and, when he left, I slid down the wall, literally. We were married in less than a year. That was seven years ago. We now have two daughters and are returning to Florence to raise them.

Gabriele, did you know who Debi was?

Gabriele: No, I had never heard of Debi, and I’m not really impressed with famous people, but obviously I was impressed with Debi, which is why I left what I was doing to be with her in the United States.

Let’s get to the important topic, food! How did you get this idea for the show?

Debi: It’s Gabriele’s fault for constantly trying to impress me with his culinary talent! When he came to my home to the States and saw that I had only soy milk, tofu and salad stuff in my fridge, he started to take over my kitchen and turned it into a fully functioning Tuscan kitchen. I always thought of myself as a decent cook, a healthy, well-traveled cook, but his food was admittedly better. So, given that he had time on his hands when he first got here, he immediately began serving me beautiful meals, continuing to do so through two pregnancies, where I gained 40 kilos both times!

I had big, healthy babies because I ate fresh, healthy food, and the weight came off in good time. Since I’m an actor and both pregnancies were documented through my different jobs on film, I was under a magnifying glass all the time with the press. They saw me happily eating wonderful Tuscan food and getting big and beautiful! I stayed proud in my most pregnant moments on the red carpet. I was constantly asked how I managed to look so good after having kids, which I found to be an odd concept. After all, isn’t a pregnant woman at her most beautiful and healthy moment in life? I attributed it all to love and my husband’s care and hard work.

A lot of my life changed when I married a person who sits down for a formal lunch and dinner every day. And, being a mom of two children obviously shifted my interests. One day, we broke out our old video camcorder and filmed ourselves preparing a dinner, an easy recipe. Gabriele cut it, we bought $40 software, we posted it, and our show began. It was funny, and, from the start, people started digging it.

We do normal food, using normal ingredients. You don’t have to use a bottle of $70 olive oil to be a great Italian cook. Our recipes and meals are for real people, who have jobs and kids. Two-job families don’t have time to be fussy or fancy, which is true for most Italian families. There is also the obvious chemistry between us that seems to entertain people. The site has no advertisers and so far has been strictly about sharing, food, culture and community. At times the site has averaged 300,000 hits in a month!

Where did the name Under the Tuscan Gun come from?

Well, there is the obvious Under the Tuscan Sun that many have heard of. But I conceived Under the Tuscan Gun when thinking about my mother-in-law and husband wanting me to get my act together in the kitchen. It was like I had a gun to my head and they were saying, “Cook for your husband, cook for your children! Get it together! Learn Italian…NOW!”

What are your favorite dishes?

I don’t have a particular dish, I go by seasonal foods and I like to balance a meal, so it’s more of the whole palette of one meal rather than the individual dishes.

How do you cook and eat seasonally in California when there are no seasons?

Good question! I have almost lost my love of strawberries. I used to look forward to them in the summer and couldn’t wait to bite into my first strawberry of the season. Now I can have them every day, so it’s just not the same. We try to cook according to the calendar seasons, even though we don’t have much of a winter here. My girls and I get cozy when it rains and imagine it is a winter day.

Gabriele, is there anything special about being married to an American and living in the United States?

Gabriele: The “spirit”: the idea that you can do anything. I realized that my Florentine friends who are artists and entrepreneurs have left Florence because there you are constantly being told you can’t do something. Here, in LA, the possibilities are endless. No one tells you, “It can’t be done”. This attitude fits more with my energy. I was kind of the black sheep of my family because I was always looking for new things to do and learn and new ways to grow.

What do you miss when you are away from Florence?

Gabriele: The country, the simplicity. I’d like to go back and harvest my own olive oil, grow our own herbs and have more of a connection between what I’m eating and how I am living.

And what about you, Debi?

What do I miss about Florence? The food, our family there, the country, the air, walks in the streets, driving to Siena, my friends, the history. I am very curious about the past. I transport myself through time with literature and museum visits while I’m in Florence. I try to imagine how my life would have been in the Middle Ages or Renaissance. I wonder how the people lived in my house 600 years ago, how they cooked and dressed, how they bathed. Of course, I miss my American water pressure, but that’s about it. I’m more relaxed in Italy, I watch less television and news and my life is fuller in a more romantic way. My children are profoundly happy there and are fluent in the language. It’s sort of a no-brainer: Los Angeles or Florence…gee, let me think about it…ok…Florence! They saw Disneyland once already. I’d prefer they visit the Roman amphitheater in my neighborhood in Fiesole.

What do you hate about American cooking?

I hate the overuse of oregano and that everything is made to taste like pizza sauce!

I hate the fact that in my house, it means that I’m cooking. But America has some incredible food deeply rooted in history that I love and try to share with my Italian family. My father-in-law LOVES my pancakes! I bring maple syrup when I come to Italy. And my kids happen to like macaroni and cheese! Shhhh…I now call it ‘pasta bianca’, again, to avoid the gun to the head…I’m under the Tuscan Gun!

Surf the TV channels in Italy, and you are bound to come across the current most popular show, for it is broadcast seven days a week. Or, if you look at TV listings and see the show’s name, Amici, you might think, as I first did, ‘Oh

The Contessa is married to an Italian count and has lived in Italy for over 33 years. In 1998, she started Friends of Florence, a non-profit foundation that raises money to preserve Florence’s artistic legacy.  The organization has raised millions of dol-lars to fund major

An Interview with Stefano Ricci

Stefano Ricci has designed men’s clothing for over 30 years.  His line, with suits costing up to $30,000, is considered the most luxurious and expensive in the world. What inspired you to become a fashion designer? Walking through the streets of Florence as a child, you