Being vegetarian in Florence

It was an unusually warm day in February when I set out with my two roommates in search of La Raccolta, a vegetarian restaurant and specialty store here in Florence. We headed east from the city center and walked arm-in-arm, passing a picturesque park and ornate apartment buildings.

It was an unusually warm day in February when I set out with my two roommates in search of La Raccolta, a vegetarian restaurant and specialty store here in Florence. We headed east from the city center and walked arm-in-arm, passing a picturesque park and ornate apartment buildings. A group of giddy children climbing onto the old-fashioned carousel completed the scene, their parents waving as they circled on the horses.

It was at the park’s edge when we realized we were no longer in Florence, and not even in Italy. The similarity hit us at the same time: we had found the Upper West Side. We were three New Yorkers on the hunt for some East Village-style veggie fare amongst prosciutto and pancetta, and this was a good sign.

I think it was during my first mouthful of the vegan lasagna at La Raccolta when I had another NYC revelation. This was vegetarian food better than any I’ve ever had in New York-or anywhere. I had found Florentine vegetarian heaven, tucked in the back corner of a health food store on via Giacomo Leopardi.

Since that day, one of my earliest in Florence, I’ve grown more accustomed to life as a vegetarian in Italy. Though I’m a pescatarian (I eat fish), I’ve been pleasantly surprised by the bounty of vegetarian (a diet of no meat or fish, but including dairy and egg) and vegan (a diet without meat, dairy or egg) options in Tuscan fare. If you search the menu in any restaurant in Florence you’ll probably find something friendly to most dietary preferences or restrictions. And for those seeking a more completely meatless meal experience, vegan and vegetarian restaurants are in full bloom across Florence.

Because Tuscany is traditionally an agricultural society formed on the foundation of wholesome, delicious produce, and because Florence is a global city, home to people from all over the world, vegetarianism is not necessarily viewed here as an dietary eccentricity. However, I quickly discovered that announcing I don’t eat meat is not the best way to begin an interaction with a server at a restaurant in Florence. Rather, search out options and then ask for ingredient clarification. You’ll seem less demanding and more interested. A vegetarian or vegan in Florence will be best served by knowing the Italian words for meats and meat-products, but most Tuscan dishes are made from a few perfect ingredients and don’t include hidden additives. It’s plausible that your server will be able to list everything in the pasta or bruscetta you want to order.

Vegetarians and vegans can peruse the primi piatti sections of menus for lots of options.

I spent my first weeks in Florence filling up on minestrone and ribollita, two common soups here that are meat-free. A pasta dish from can serve as a main course, though it might be hard to ensure the food comes out of the kitchen at the same time as the rest of the table’s secondi. Fill out the meal with contorni, or side dishes. Vegans can often make meals out of contorni vegetables or out of dishes from the antipasti section, coupled with asking for dishes without cheese. I’ve found it can be uncomfortable to ask to alter dishes served in restaurants, though this can be common practice in other areas of the world. Asking about ingredients or saying you are not able to eat a certain ingredient can be easier and is the most polite way I’ve found to foray into asking for a change to a menu item.

For quick sandwiches on the go, it’s more commonplace to ask for a custom order. Most sandwich shops, for example, have specific menus, but it’s accepted to ask for different sandwich ingredients. At an aperitivo, watch for potential anchovies in dipping sauces at the bar: bagna cauda, the sauce you see heated and served with vegetables, is made with anchovies.

A vegetarian will not struggle to eat well in Florence, but for a full veggie or vegan experience, try one of the many restaurants in the city catering to this specific diet. (For some suggestions, check out ‘Where to go’ in the box on this page.)

When I first gave up all meat, when I was in the grocery store, it was hard to think of options beyond pasta. Florentine food stores often devote an entire aisle to this beloved ingredient, and many dried varieties don’t contain eggs or dairy. However, many fresh pastas do contain eggs, so it’s best for vegans to ask at restaurants. Vegetarians and vegans in Florence can also stock their kitchens with plenty of other green fare outside the realm of carbs. Most small grocery stores in the city center (including Billa and Il Centro) carry veggie burgers in the frozen food section. My favorite brand is called Valsoia (cook it in the oven for the best taste). Ingredients like tofu and seitan are a bit harder to come by, but you can find them at Esselunga and specialty shops like La Raccolta. Vivi Market, an international store near the center of the city, carries a selection of Asian and South American flavors, and many prepackaged foods there (think miso soup or ramen) are vegetarian-friendly.

The choice to not eat certain foods is something that defines who I am. Though I had qualms about finding vegetarian fare before setting out for Italy from the States, I’ve found that food in Tuscany is defined far more by quality and freshness than by the inclusion of meat. Vegetarians in Florence can bring their buon appetito and fill up on plenty of fabulous, meat-free Tuscan fare.

Vegetarian in Florence? Check out these shops and restaurants.

La Raccolta looks like a health and organic foods store when you first walk in, but head toward the back to the spacious restaurant attached. Order the mixed plate for a sampling of the best daily offerings instead of trying to decode the all-Italian menu.

Offering a varied menu of (very affordable!) vegetarian and vegan fare, Brac is both a bookstore and small restaurant featuring a quaint courtyard with comfortable couches and overall calm, casual and intimate setting.

Ruth’s is a kosher restaurant known for its Israeli vegetarian cuisine.

You can find a variety of international, mostly Asian, foods at this tiny grocery market. For those with a craving for South American food, there are salsa and chips aplenty at Vivi.

Piazza Indipendenza (at the corner of via XXVII Aprile) Mon to Sat, from 8am-noon

There is always something in the menu for vegetarians. Check out their brand new veggie burger.

Robyn Baitcher is a New York University junior majoring in journalism and environmental studies. She is spending this spring semester in Florence eating, exploring and occasionally studying. 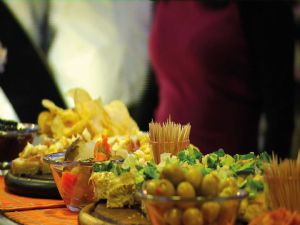 It was the late 1860s, and the city of Milan was asserting itself as a power player in the unification of Italy, laying the foundations of railroads and of Italian independence. But while the state of Italy unfolded, a quieter force was also at work in the Lombardy capital. Called