It was the late 1860s, and the city of Milan was asserting itself as a power player in the unification of Italy, laying the foundations of railroads and of Italian independence. But while the state of Italy unfolded, a quieter force was also at work in the Lombardy capital. Called

During those years, a man named Gaspare Campari moved to Milan from Novara and opened a small bar, called Café Campari, that sold a peculiar drink: the bright red, bitter liqueur that stimulated the appetite was made from mixture of secret ingredients. Gaspare eventually mixed his home-brewed invention, also called Campari, with vermouth and soda to make what would become known as the Americano, an aperitif that remains a Florentine favorite.

Now fast forward to 1920s Florence: Count Camillo Negroni asked for an Americano with gin instead of soda and the most popular palate opener of all time, the Negroni, was born. In the meantime up in Milan, Campari and the café culture started taking off, prompting a revival for the custom of having a pre-dinner drink that stimulated both the appetite and social life.

By the 1980s, the native Milanese custom had evolved further, with food accompanying the drinks. This is the Italian aperitivo as we know it today in Florence and elsewhere in Italy. The aperitivo, however, is not unique to Italian peninsula: the custom of a pre-dinner drink and socializing to unwind from a long workday is common practice in many European countries and across the Atlantic.

But the Campari custom morphed into something special in the 1980s and 1990s, explains Pierluca Birindelli, a University of Florence sociologist who studies social trends. ‘In Milan, at the end of the 80s and beginning of the 90s, somehow we assisted in a kind of mix between aperitif and happy hour. Then the “drink plus something to eat” (sometimes so much that it often substitutes dinner) in different styles, depending upon the bar or wine bar’s target, spread all over Italy,’ he explains.

Today, most cafes and bars in Florence offer drinks from 7 to 10pm alongwith a buffet of savory offerings that range from potato chips, fresh mozzarella and pizza slices to full buffets featuring all the food groups. Not dinner but not necessarily a light snack either, this perfect setting for a first date is also a perfect way to catch up with friends.

Bars offering aperitivos (called ‘happy hour’ if you’re in Milan) in Florence echo this sentiment, insisting that their clientele is a mix of foreigners and locals, tourists and people who live in the neighborhood. Slip into a cozy bar where drinkers chat with the bartenders and with each other for hours and leave for dinner at 10 pm, or stop at a bar where clients are spilling onto the street for a quick drink and a bite before the sunset. Order an Americano and steep yourself in the history and charm of the gratuitous snack and early evening refreshment, the Italian custom of the aperitivo.

Know the rules of the aperitivo

Based on interviews with staff at a selection of popular Florence bars offering aperitivos, here are some things to keep in mind when drinking and snacking in the early evening.

Mixing. The most classic aperitivo cocktails are the Americano and the Negroni. Both are made with Campari and both prime the palate nicely for dinner. Another pre-dinner option is the Bellini, a mix of prosecco and peach puree that was born in Venice in the 1940s. Most bartenders in Florence say that no specific drink makes for the best aperitivo, so order according to your preference. Many do recommend ordering some kind of cocktail, but it’s really up to you if you want to forego a sugary Strip Tease and opt for something with a bit more bite. Don’t drink? Non-alcoholic and alcoholic drinks are usually the same price because food is included. Nobody will mind if you sip on an eight-euro diet coke and snack away.

Munching. When it’s time for the food, there’s one rule to remember: this is not dinner. Aperitivo is for socializing and grazing, not sitting down for a multicourse meal. Indeed, one of the best ways to stand out as a non-Italian is to take too many plates back to your table. On average, bars suggested taking two plates maximum per drink ordered-nothing more. On the other hand, the idea is to eat, not to get drunk, says Moyo bar manager, Alberto Isoppi. Lastly, when returning to the food spread for another helping, it’s up to patrons whether they use the same plate or get a new one.

Mingling. The best part of the aperitivo is meeting up with old friends and making new ones. Bartenders say they would never ask a group of aperitivo-goers who linger for hours at a prime table to leave; they prefer patrons use common sense to know when they should order another drink or vacate their table. Generally, Italian custom allows for drawn-out dining and drinking experiences, so take your time. But if you stay for several hours, it’s best to spring for more than one Campari.

Robyn Baitcher is a New York University junior majoring in journalism and environmental studies. She is spending this spring semester in Florence eating, exploring and occasionally studying. 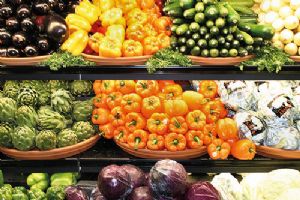 Being vegetarian in Florence

It was an unusually warm day in February when I set out with my two roommates in search of La Raccolta, a vegetarian restaurant and specialty store here in Florence. We headed east from the city center and walked arm-in-arm, passing a picturesque park and ornate apartment buildings.