A city with stories

Florence is a wonderful city, full of art, culture and stunning architecture. But, from a teenager's point of view, wandering around ‘some old city' in the boiling hot sun or under the cold, wet rain to visit the tomb of ‘some dead guy' or ‘some paintings'

Florence is a wonderful city, full of art, culture and
stunning architecture. But, from a teenager’s point of view, wandering around
‘some old city’ in the boiling hot sun or under the cold, wet rain to visit the
tomb of ‘some dead guy’ or ‘some paintings’ that don’t seem any different than
the others you saw that same day, doesn’t really sound like much fun. Rest
assured, as hard as it may seem, there are actually some pretty cool things for
teens lurking amongst all the history. Here Lara K. Breckon offers an
off-the-beaten track adventure around the Duomo.

One
of the most famous sights in Florence is, of course, the magnificent cathedral,
with its impressive dome, the biggest in the world when it was built more than
500 years ago. However, in addition to the impressive architecture and
statuary, there’s some quirky stuff to see, too. Like the Italian clock that
ticks backwards. And the cage for crickets that disappeared because of
Michelangelo. And a small marble plaque that reminds you of the origins of the
Florentine word for ‘dummy.’

The clock that tells the time, Italian style

A
well-known cultural question is, what is ‘Italian’ time and punctuality
compared to American or English time? From ‘fashionably late’ to ‘dinner-party
early,’ sometimes it is difficult to tell when the Italians will arrive. It
usually is late, though!

The concept of time seems to be
very flexible in Italy and this is also reflected in an old clock you can see
in Florence’s cathedral: it ticks backwards, and so it has to be adjusted every
week or so! The clock face is magnificent-it was painted by the famous artist
Paolo Uccello back in 1443-and the clockwork is pretty special, too: Galileo
Galilei had a hand in improving it to make it more accurate.

You can find the clock on the
inside of the west wall of the cathedral. The first thing you’ll notice is that
it only has one hand, in the shape of a golden shooting star. The clock face, surrounded
by portraits of the four evangelists, looks a bit funny. There are 24 numbers,
not 12, and they’re all in Roman numerals. The clock ticks backwards
(anti-clockwise!), starting at XXIIII and ending at I. But XXIIII (24) is not
midnight. It is the time of sunset. Back in the day, there was a curfew. The
city gates were closed and no one was supposed to be in the streets. The
cathedral’s bells, timed to the clock, would ring at set intervals before
sunset and then at curfew time.

The time the sun sets, of course,
varies throughout the year, so periodically the clock must be adjusted so that
the last moments of daylight coincide with the Roman numeral XXIIII. Then the
hand works its way anti-clockwise, arriving again at sunset, 24 hours later.
So, um, if sunset was at 8pm last night and the hour hand is now in the middle
of III, does that mean it’s 2:30? Perhaps it is because it took Italians so
long to read their sunset-based, backwards-running Roman numeral clock that
they were always late for appointments.

A cage for crickets

When
you come out of the cathedral, you might like to point out to your parents or
friends something that isn’t there. Have a good look at the massive
Cupola, Filippo Brunelleschi’s soaring achievement. Now look closer: around the
tambour, or drum, on which the dome rests there should be a balustrade, eight
sections around the octagonal dome. But only one of the eight is visible. The
rest of the masonry and brickwork looks a bit rough and unfinished. There’s
plenty of scaffolding around it, as the Opera del Duomo, the organization that
cares for the building, carries on the seemingly endless tasks of restoration,
cleaning and repair. Perhaps the rest of the balustrade has been removed for
repair?

No way. It never existed. And it’s
Michelangelo’s fault. It turns out that an architect, Baccio d’Agnolo, designed
the balustrade in the early sixteenth century. When the first section was put
up, Michelangelo hated it, saying, ‘It’s a cage for crickets.’ So the
authorities decided to cancel the project and no one has ever come up with a
new design. Still, it’s only been 500 years since the decision to stop-one
mustn’t hurry such things. It’s only half past XVII!

Have
you ever heard Florentines, taking their life in their hands as they negotiate
a pedestrian crossing, yell ‘Che bischero!’ at a scooter as he swerves past
them? It means something like ‘What a dummy!’ in the Florentine dialect, and
you can find out more on the history of this local insult if you walk around to
the south side of the cathedral.

Just to the right of the doorway,
you’ll see a little marble plaque in the wall recording the birth of a member
of the Bischerini family. And near the cathedral but a bit further away, in via
dell’ Oriuolo, you’ll see a sign for Canto dei Bischeri (‘Bischeri corner’).

What has that got to do with mad motorino drivers and Florentine insults? Well bischero means ‘dummy’ or ‘fool,‘
and the word originated in the thirteenth century, when work on the cathedral
started. Local authorities had to buy up all the houses in the area where the
new cathedral was to be built, offering the owners a very fair price. Most
homeowners accepted, but the Bischeri family, who had several properties in the
area, refused and held out for more money.

Immediately following their
refusal, their house caught fire and was destroyed. The Bischeri lost their
house and lost out on the opportunity to make money on the sale of their
property to the city (For details, see TF 82).
Hence the use of the name to mean someone who is stubbornly foolish.

There are a lot more cool and
quirky stories I could tell you about hidden Florence, but they will have to
wait until the next article.

Lara K. Breckon is a 13-year-old expat and Florence resident. She is an avid writer and will be the author of upcoming articles for TF's FlorenTeens column. 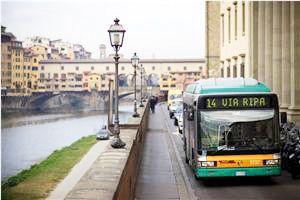 Get lost, will you?

There are many ways to find the multitude of faces and places of a more authentic kind of Florence than the one you will see in and around piazza Duomo and the Ponte Vecchio. Finding Florence is an effort all study abroad students should make to seek true authenticity, to