From fiddle to folk house

A few years ago, I took out a violin I had bought for five dollars at a garage sale back when I lived in the Midwest and brought it over to Italy—hoping I would eventually learn how to play it. After a few lessons with Florentine Vieri

A few years ago, I took out a violin I had bought for five dollars at a garage sale back when I lived in the Midwest and brought it over to Italy—hoping I would eventually learn how to play it. After a few lessons with Florentine Vieri Bugli, the fiddler for the Whisky Trail and Baro Drom, who pushed me to play by ear, I was able to keep that old-timey sound alive in a country far from the music of my home. Then I set about trying to find people to play with.

The more musicians I met, the more I realized I needed to find a meeting ground for American roots music: so I took my passion one step further and organized the American Roots Folk House, hosted at the Teatro del Borgo in Florence: a hang-out for folk, rock and blues events. Growing up in the US where a history of immigration created this type of music, it connects well with the changing demographics here in Italy; as with all roots music, it is soothing to hear notes from your childhood in a new home.  On June 18th, at 5:30pm, Teatro del Borgo will be celebrating its first full season with the event, Palco Aperto, including musicians of the American Roots Folk House, theatrical skits and an apericena (behind the theatre in the Casa del Popolo parking lot, via Madonna del Pagano). The Teatro del Borgo is located at via S. Bartolo 95, Firenze. Reservations necessary. 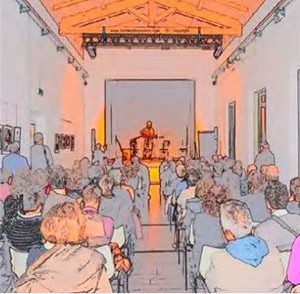 In the outskirts of Florence not far from the throngs of tourists in the historic center, amid the fields flanking the highway to Pisa, lies the neighborhood of San Bartolo a Cintoia, a hushed and cozy borgo where tall buildings line the antique streets like protective giants warding off invading