The Florentine is publishing this interview on the occasion of Vogue Fashion’s Night Out on September 17, 2015.

At 28, Eleonora Bruno has already established herself as a rising stylist and designer in the fashion world with her design line, ELY B. Born in Florence in 1987, she showed her creativity at a young age. For family reasons, her studies began at the American School in Bucharest, Romania, where she recognized her interest in fashion, then consolidated and strengthened it at the Lucrezia Tornabuoni Institute in Florence, where she learned the techniques of fashion drawing and pattern making.

In 2009 she already started on her independent path, creating the fashion project ELY B, ELEONORA BRUNO HATS, and won a Polimoda scholarship by designing a clothing collection for the launch of Audi models in 2010. Graduating in 2012, her brand became known above all for uniquely creative headpieces, in addition to some jewelry and clothing, all under the logo of a horse and a drawn shell, evidence of her love for animals and her use of natural elements. This full-fledged vegetarian said, ‘I feel the horse is an important and elegant animal’—but she has yet to go horseback riding herself!

Bruno quickly jumped into the competitive fashion world by enrolling in the H&M Design Award in 2013 with a capsule collection she designed for the contest. She drew inspiration from the Pala di Brera, a famous painting by Piero della Francesca, as well as a vintage postcard found randomly in a flea market representing a young woman that Eleonora imagined to embody the idea of a modern Mary Magdalene walking the streets of Paris.

When asked why she first entered the world of fashion, Bruno explained ‘Fashion came as the best way for me to present my visions, feelings and thoughts. Fashion is something everyone uses to express themselves,’ and talking about her reasoning towards concentration on accessories such as headpieces: ‘It’s more impactful for me now in this moment. For entering the fashion industry, accessories are more of a niche process. Designing hats is like a form of therapy for me. Like taking out something from inside myself and showing it. Very liberating for me. It’s like a painter creating a fresco. It’s freedom.’

A favorite even among celebs

In her designs, Bruno reinterprets two main elements of the Renaissance masterpiece: the ostrich egg, which appears in multiple forms such as on a headpiece, necklace or bag; and the halo, seen as headpieces adorned with feathers from the pampas grass plants.

When asked who can wear ELY B, she is proud to say that anyone can, but Bruno, in retrospect, knows the true candidates are the ‘women who have strong personalities, who are not afraid to justify their personal madness.’ No surprise that the list of fashion icons wearing Bruno’s headpieces includes the acclaimed Eva Cavalli, Sally Perrin, Susan Nevelson and Anna Dello Russo.

She was the only Italian finalist of the H&M Design Award in 2013 and in the same year she was selected as a Vogue Talent by Vogue Italia. Some of her newer collections have appeared in editorials for the most renowned fashion magazines: ‘My biggest goal is being featured on the cover of Vogue Japan with a piece worn by the super-model Magdalena Frackowiak, and having my headpiece photographed by Karl Lagerfeld for Harper’s Bazaar,’ she notes.

No plans to slow down

Unsure of what her future collection will entail, Bruno elaborates on how her occupation maintains a constant need to search for inspiration. ‘The biggest tragedy is when my mind is empty. Now I’m in a transitional period of my life, because I know I created a sort of style and now I want to move forward and change my style. I want to put more reality into my pieces.’

‘Never are there dull moments; designers always have to prove to others that their new ideas are worthwhile. My least favorite part of the industry? That you can never stop, you always have to search for new inspirations and convince people that the objects are good. Convincing people is difficult, especially when you’re young, because they have to trust your words.’

At 28, Eleonora’s career is just beginning. With a transition to a more realistic style or possibly more clothing based collections, Eleonora Bruno will continue to inspire women to ‘justify their personal madness’ as she rises higher in the world of international fashion.

Zoe Kaufman is a rising senior at the University of Connecticut. She is pursuing a bachelor?s degree in history with a minor in entrepreneurship. She comes from a small family in West Hartford; her mother is a local attorney and her father travels the east coast as a senior project manager for Otis Elevator. Growing up she was an avid golfer, travel lover, and dedicated student. In the future she hopes to enter the business world as a purchasing agent. The opportunity to learn about fashion while in Florence came as a pleasure to broaden her writing abilities. She cannot wait to explore the world of personal imagery and how to express those visuals on paper. 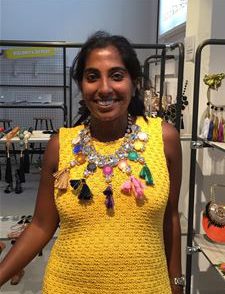 The Florentine is publishing this series of interviews on the occasion of Vogue Fashion’s Night Out on September 17, 2015.   Just as a butterfly grows from the caterpillar’s cocoon, Caterina Mariani has transformed from a young Florentine Polimoda student into a worldwide known jewelry and