Instagram has deeply changed the way we share our lives online. At times it seems everyone has an Instagram account, even Barack Obama, the Queen and the Pope. Although often considered a platform on which people can express themselves freely, it has also given rise to interesting virtual communities, like @ilcondominio. 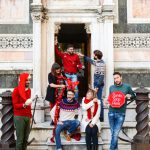 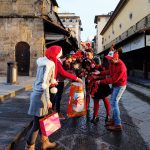 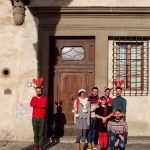 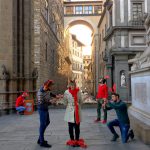 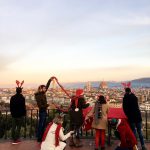 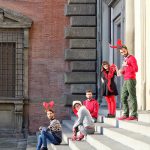 Born earlier this year, the project has reached almost 2,000 followers in just a few months, while each member of the group is now gaining popularity and racking up creative opportunities.

“We already knew each other because we used to put a like or a comment on each other’s photos, but we physically met for the first time at the beginning of 2016, during an InstaMeet. We were in Santa Croce and took a picture on the steps of the church; we looked like the Backstreet Boys in the 90s!” said @val_ina. “We decided to have lunch together and ended up talking about ourselves, our projects and passions for the entire day, so we decided to meet up the following week, and that’s how @ilcondominio was born”.

The group currently consists of eight people, but everyone is invited to join.

“Anyone can be part of our photos. We’d really like to meet new people, so we can create stories with a new point of view,” said @mrvannenstein.

@ilcondominio doesn’t just share colorful and aesthetically pleasing pictures; each photo has its own story.

“Storytelling is very important for us. We do not share normal, static pictures: we invite our followers to describe them, and perhaps help us to complete or continue the story,” said @mirconfuso. “It’s interesting because we don’t really decide our stories before we portray them. We just hang out together around Florence and create a new, fresh one once we find an inspiring place. After all, there are lots of beautiful spots here in Florence.”

There are no issues or dramas between the Instagramers of @ilcondominio.

“We respect each other and we listen to all ideas, from the most creative to the silliest ones. In the past, we’ve loved a newcomer’s idea just because we thought it was cooler—we decide as a group and there’s no leader,” said @eonardo.

Friendship, respect and photography are the buzzwords of this group.

“We’re not professional photographers, but we do like to describe things with a new perspective. Before Instagram, I used to take pictures for myself, just because it made me feel good. I still do that, but I also like the idea of sharing my work and reading suggestions from people with the same passion in order to improve,” said @valegamby.

For this December issue of The Florentine, I asked the group to take some festive pictures of our city.

“It was a cold Sunday, we met at 5am and walked through Florence’s tiny streets for the entire morning. We had so much fun and tourists stopped us to take a photo and asked us what we were doing with Christmas hats in November—they were curious and confused at the same time!”

Before they left, I asked them one last question. Why the name @ilcondominio?

“We’re a group of different people who embrace and accept each other, just like an apartment building, but our monthly meetings are mostly dinners, with a lot of Tuscan food.”