Bound by a girdle

The year is 1312. The scene of the crime is Prato. Musciattino, from neighbouring Pistoia, sneaks into the Cathedral of Santo Stefano late at night, intent on stealing the city’s most prized possession: the relic of Mary’s girdle. But so strong is the faith of the pratesi that a mysterious fog descends outside, blurring the thief’s vision as he attempts his getaway and ultimately finds himself back where he started. Quickly discovering the deceit, the citizens call for his right hand to be severed and for him to be burned at the stake. 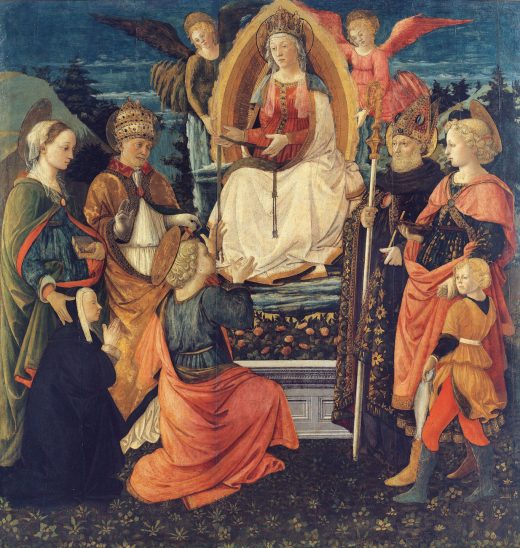 Filippo Lippi, Madonna of the Belt

In the world of relics there are those that stand out, winning prestige for the city that holds them. A piece of St. Peter, a part of the True Cross, the head of St. John the Baptist or, of course, something that once belonged to Mary, the mother of Jesus. Throughout Italy and the larger western world, devotion to the Virgin Mary is strong, with cities yearning to showcase their dedication to the holy woman, sometimes even competing head on to become the most pious of them all. But these are no mere games, no schoolroom fight between blustering boys. Over the centuries these relics, and the saintliest among them, have become intrinsically tied to the identities of the cities they call home. For centuries one such city has been Prato, since 1141 home to the legendary girdle once worn by Mary.

The current exhibition at the Palazzo Pretorio explores the relationship Prato has with the girdle and how the city’s identity has been bound by the relic since the 12th century. The show traces the depiction of the girdle in medieval and Renaissance art beginning with the earliest known portrayal, that of the Master of Cabestany, whose sculptural relief depicting the Virgin Mary gifting St. Thomas with her belt opens the exhibition thanks to an exceptional loan from the parish church of Cabestany in France.

The key protagonist at Palazzo Pretorio, however, is Bernardo Daddi and his altarpiece depicting the Assumption of Mary, the pieces of which have been remarkably brought back together for the show after being dispersed among the Old and New Worlds. The masterpiece, made between 1337 and 1338, is the focus of the first room, with the exception of the Master of Cabestany’s relief. The work comprises three parts: two predellas, one depicting the journey of the girdle to Prato and the other narrating the Stories of Saint Stephen, drawing a parallel between St. Stephen’s body arriving in Rome and the girdle making its way to Prato, and the Assunta, depicting Daddi’s interpretation of Mary offering the belt to St. Thomas, who catches the fabric as the Virgin drops it down to him during her assumption into heaven. Daddi’s version of the scene served as a model for later portrayals and indeed the exhibition does not fail to showcase subsequent interpretations as you stroll through the rooms.

Arguably, the exhibition proceeds rather quickly once it is understood that the show is simply a collection of depictions of the same scene and its development through the centuries, and those not accustomed to either religious stories or the deeper elements of art history may find the repetition somewhat overdone. We are nevertheless rewarded with enough breaks in the paintings thanks to the inclusion in the show of illuminated manuscripts, vestments, altar cards and, impressively, replicas and alternate versions of Mary’s girdle.

What rings clear is the absolute importance of the relic in the history and identity of Tuscany’s textile town. Occasional anecdotes explain the relic-based rivalries Prato has developed with other cities, like Pisa, who had their own slightly quirky custom of wrapping an incredibly long belt around the whole of their cathedral on the Feast of the Assumption. In this pro-Prato exhibition, the story almost seems to present itself as an intentional slap in the face to the simple ostensione of the girdle from the cathedral’s exterior pulpit five times per year. But no matter the city, the development of the civic value of relics is one of the key points of the show. It could be said that younger pratesi are indifferent to the presence of Mary’s girdle, but should you ask them what makes their city special, their thoughts will turn promptly to the Virgin Mary. Prato and the girdle go hand in hand, bound together in the past and present.