You’ve likely heard of Palazzo Pitti and you’ve certainly walked by Palazzo Vecchio on your evening strolls through the centre of Florence, but there’s an even older Medici residence in the historic centre of this Renaissance city that’s just as splendid but often overlooked. That would be Palazzo Medici Riccardi, a stone’s throw from the Basilica of San Lorenzo and the Medici Chapels behind the church. Construction on this immense palace began in 1444, when the area to the north of the cathedral was little more than a woodland. Cosimo the Elder didn’t pick this location because he was in search of a bit of quiet; no, for the rising Medici patriarch, this was the ideal location for accessing the family’s villas dotting the areas to the north of Florence, like the Mugello, where we can find the Villa di Cafaggiolo, its name a reference to – not coincidently – a wooded area. 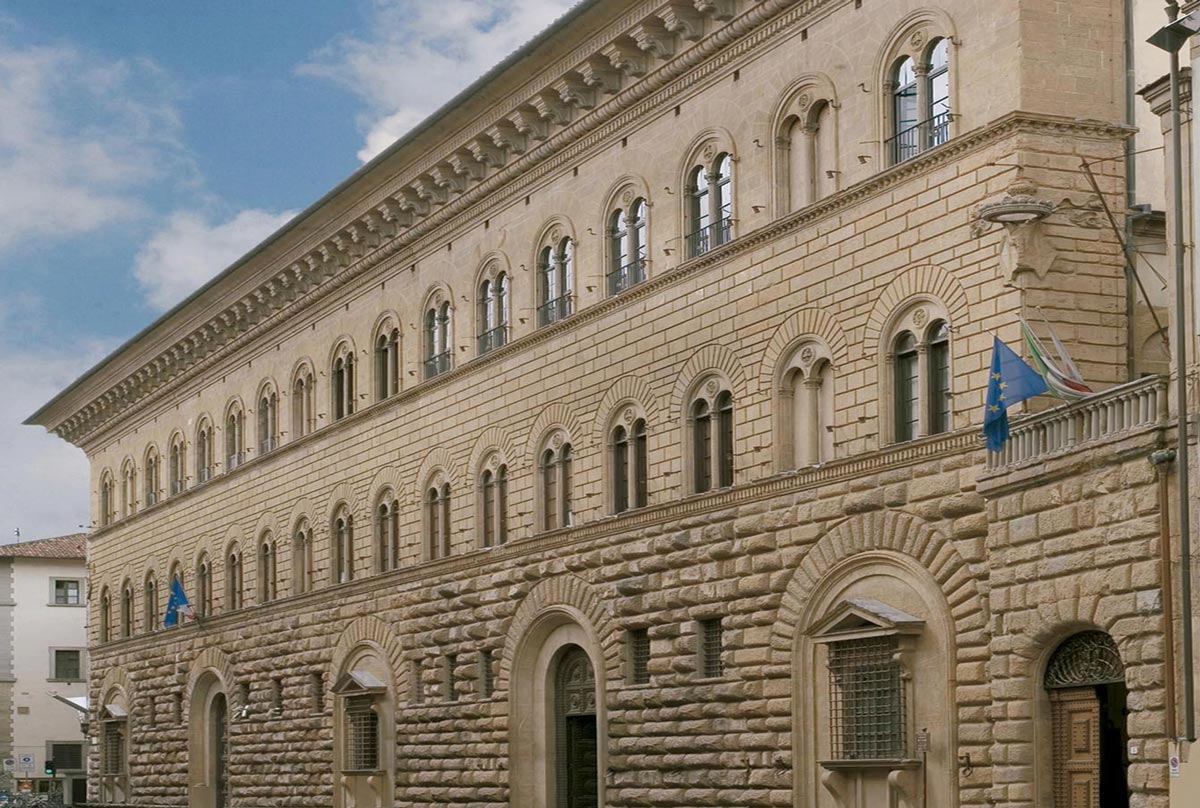 Scholars and architecture enthusiasts will know that Palazzo Medici Riccardi is something of a prototype for all Renaissance architecture to come, designed by Michelozzo to represent the emerging ideals of this new era. Our visit starts outside the building, where this concept is most evident. The facades of the palace are divided into three levels, progressively shorter and increasingly refined as they ascend. The first level is immense and decorated with rusticated blocks of stone, while the second level is characterized by a smooth ashlar surface. The third level is both the shortest and the most elegant, its ashlar blocks nearly free of all visible cracks between each one of them. This kind of three-level design can be seen in many later palaces in Florence and Tuscany, like Palazzo Strozzi on the other side of the city and Palazzo Piccolomini in Pienza, in the Val d’Orcia.

There’s something else worth noting on the outside of the building: the corner facing via Cavour has two large, bricked-up archways, though they were open when the Medici resided in the palace in the 15th century. This is because back when Cosimo the Elder was at the helm of the family and its powerful bank, their business was conducted right here in this building, on the ground floor. Today, these rooms host temporary exhibitions, but 600 years ago, this was the very sight of the Medici transactions that wrote the history of modern banking.

The courtyard and sculpture garden 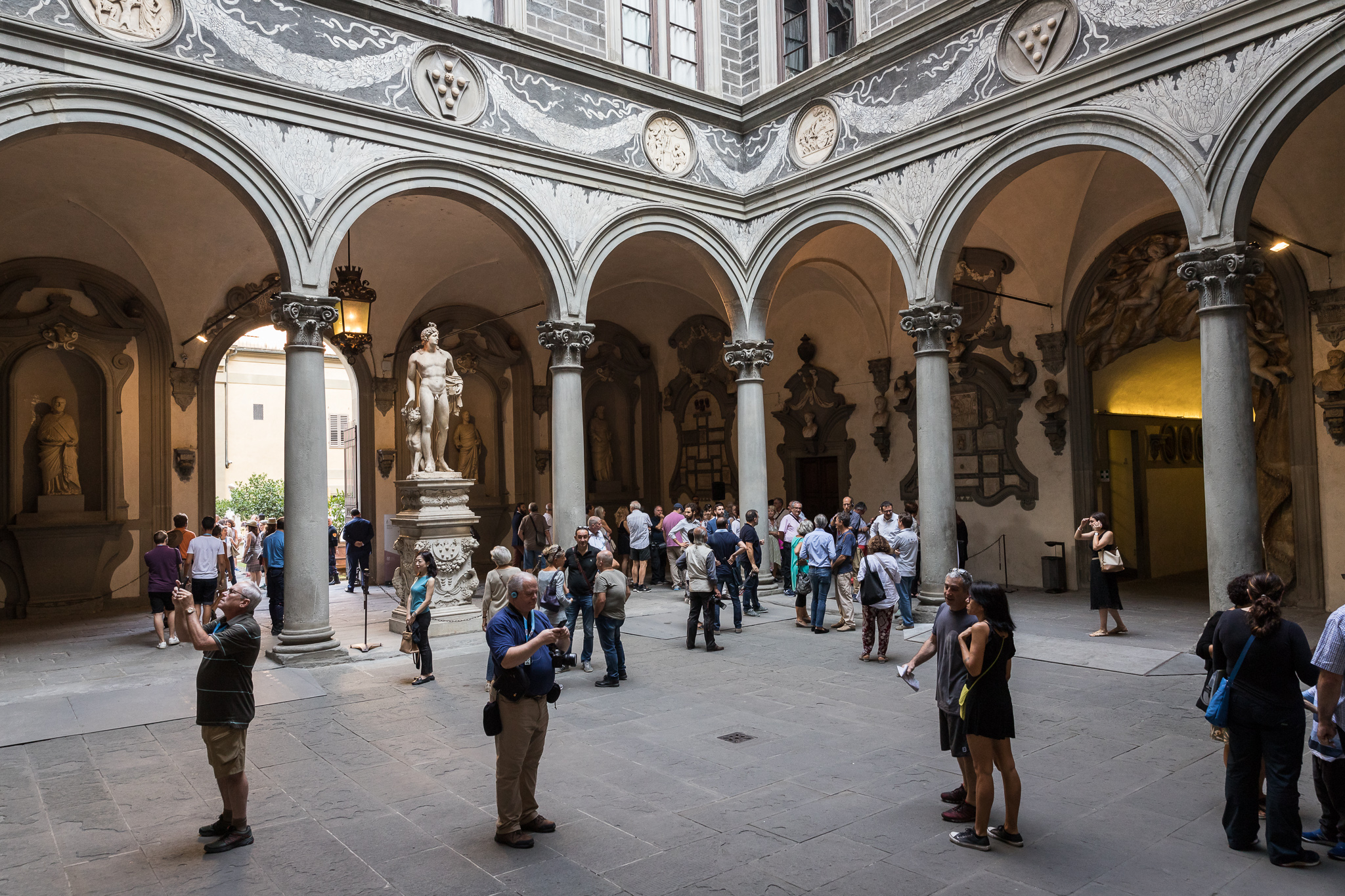 The visit continues to the courtyard. This space is a splendid treat for the eyes, but to understand how the space would have looked when the Medici were living there, you’ll have to imagine completely blank walls. It was only after the Riccardi family moved in in 1659 that decorations began to adorn the space. In fact, what we see today is a curious mix of Renaissance and Baroque, two influential styles living side-by-side in this one courtyard. As mentioned before, Palazzo Medici Riccardi was a model on which many later buildings were based, but the same can be said for the Renaissance decoration.

An important example of this are the marble tondos sitting just above the porticoes, three on each side of the square courtyard. The figures in the reliefs are said to have inspired a young Michelangelo Buonarroti, who lived in this building as a young adult, when he was taken in by Lorenzo de’ Medici. Having seen these figures every day, which in turn were taken from ancient imagery, the future Renaissance master drew inspiration from them when making his masterpieces. 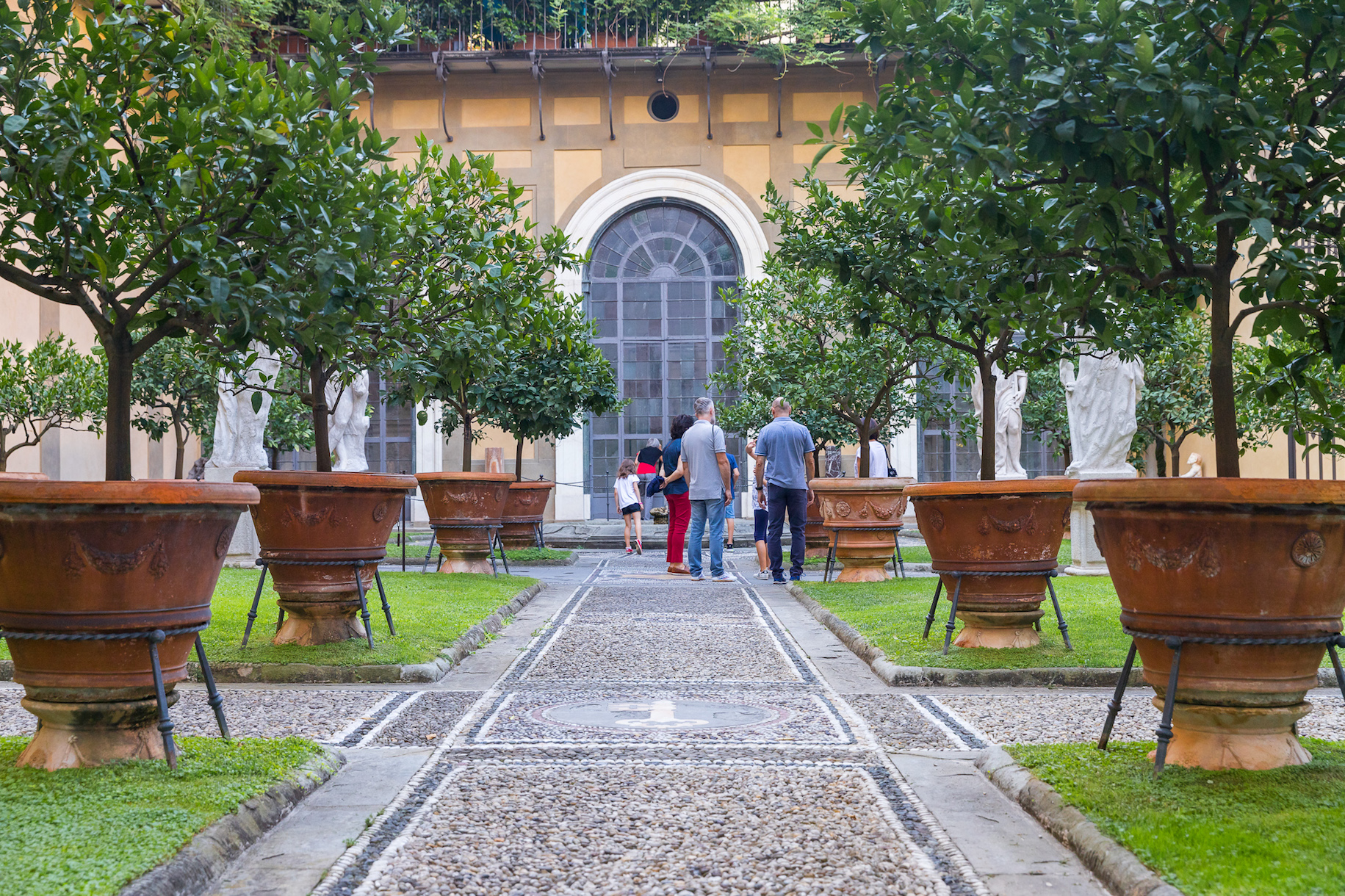 The courtyard and the adjacent garden, facing today’s via de’ Ginori, were also used to house the family’s wealth of treasures. Back then, a visitor to the family’s abode would have been greeted by none other than Donatello’s bronze David, whereas the artist’s Judith and Holofernes was kept alongside the other pieces of the Medici collection in the garden. Both works of art were removed from the building in 1494, when the Medici were first kicked out of Florence. In the process, the palace was ransacked and their property taken away. 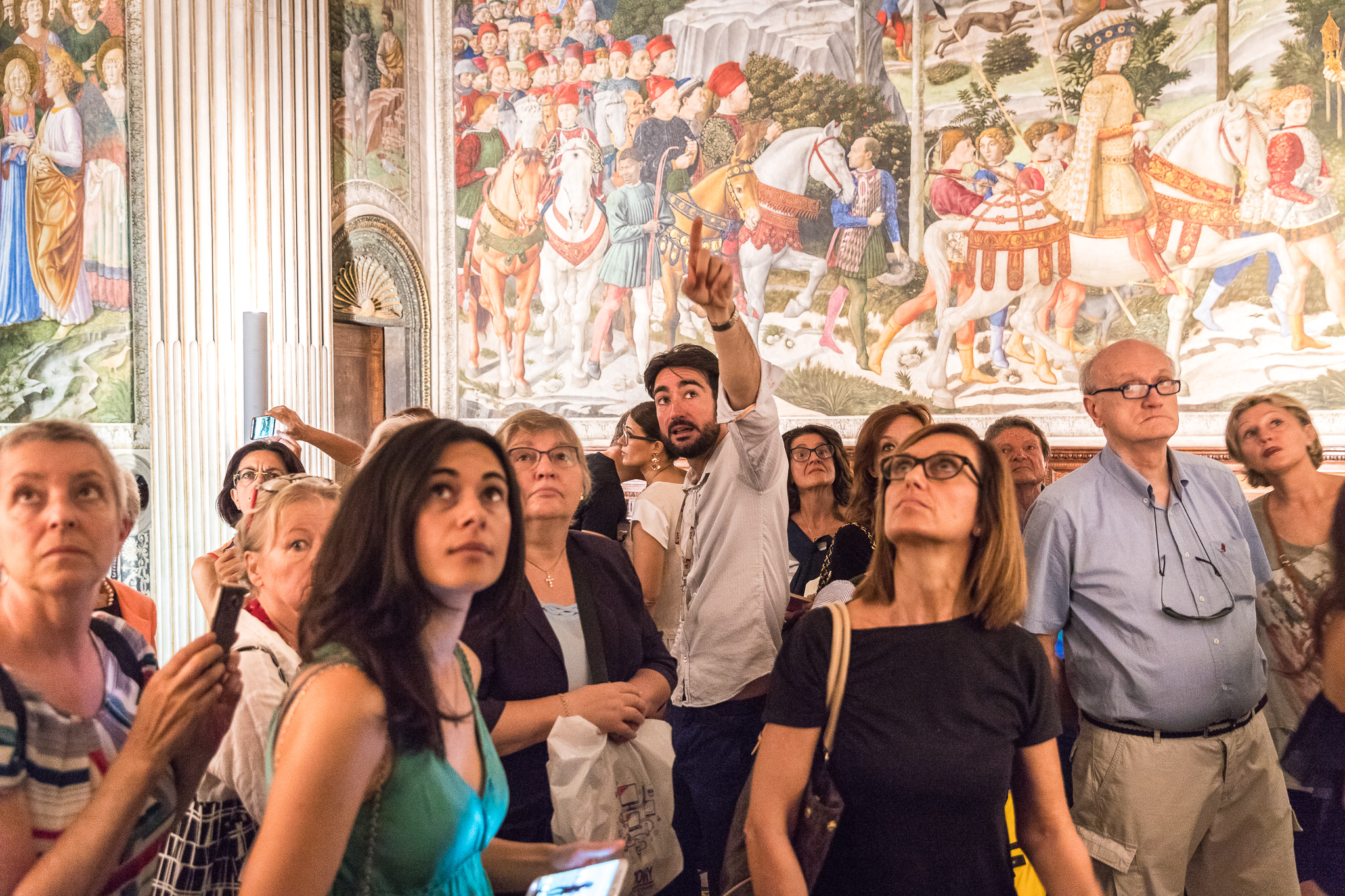 But let’s continue on to something that couldn’t be taken away, surviving nearly intact to this day. Ascending the grand staircase by Giovan Battista Foggini, you’ll come to a veritable treasure chest of Renaissance art. The Magi Chapel served as the private place of prayer for the Medici family, and its walls are almost completely covered in a rich and colourful fresco cycle painted by Benozzo Gozzoli starting in 1459. The decorations depict the procession of the three Magi, but the figures are entirely linked to the history of the Medici family and one particularly important episode in the history of Christianity. In 1439, Florence played host to an ecumenical council that was intended, among other things, to bring an end to the Great Schism that had divided the Roman Catholic Church and Eastern Orthodox Churches since the 11th century. We can see some important figures in the event depicted in Gozzoli’s frescoes, namely in the Magi Melchior and Balthasar, painted here as Joseph II, Patriarch of Constantinople, and John VIII Palaiologos, Byzantine Emperor, respectively. The artist painted their entrance into the city, transforming it into a symbolic representation of a hope for the future: on the one side, Jesus’ birth, while on the other, the potential end to the centuries-long break in the church and the Medici’s proud role in seeing it through.

And Caspar, the youngest Magus? That would be a young Lorenzo the Magnificent, although he’s portrayed here in an idealized form: the real Lorenzo can be seen to the far left on the east wall, alongside his brother Giuliano and just beneath Gozzoli’s self-portrait, who stands out thanks to his direct gaze and the words “Opus Benotii” written across his red hat. Other members of the Medici family were also painted into the picture, including Cosimo the Elder and his son, Piero the Gouty.

Ph. A. Quattrone, via Associazione Mus.e

As is typical of Renaissance art and architecture, no decoration in this room is left to chance, not even the floor. You’ll notice that the three colours of the marble used to decorate the chapel are the same ones adorning the Cathedral of Santa Maria del Fiore; that’s because the three marble varieties used on the church are a common occurrence throughout Tuscany, and this chapel is no exception. The colours represent the theological values of Faith (white), Hope (green) and Charity (red), seamlessly in line with the religious ideology of the day.

The Magi Chapel also has another unique feature that may not be obvious at first glance. When the palace passed into the hands of the Riccardi family in 1659, the building underwent several modifications, including a large extension on the north side and Foggini’s grand staircase leading to the chapel. A corner of the chapel had to be knocked down in order to make room for the stairs, which created a corner projecting into the room. The change meant the oldest Magus had to divided, with the back portion of the scene brought forward. Unfortunately, what was originally depicted in the corner of the south wall is today lost to us.

The Apotheosis of the Medici Dynasty in the Luca Giordano Gallery 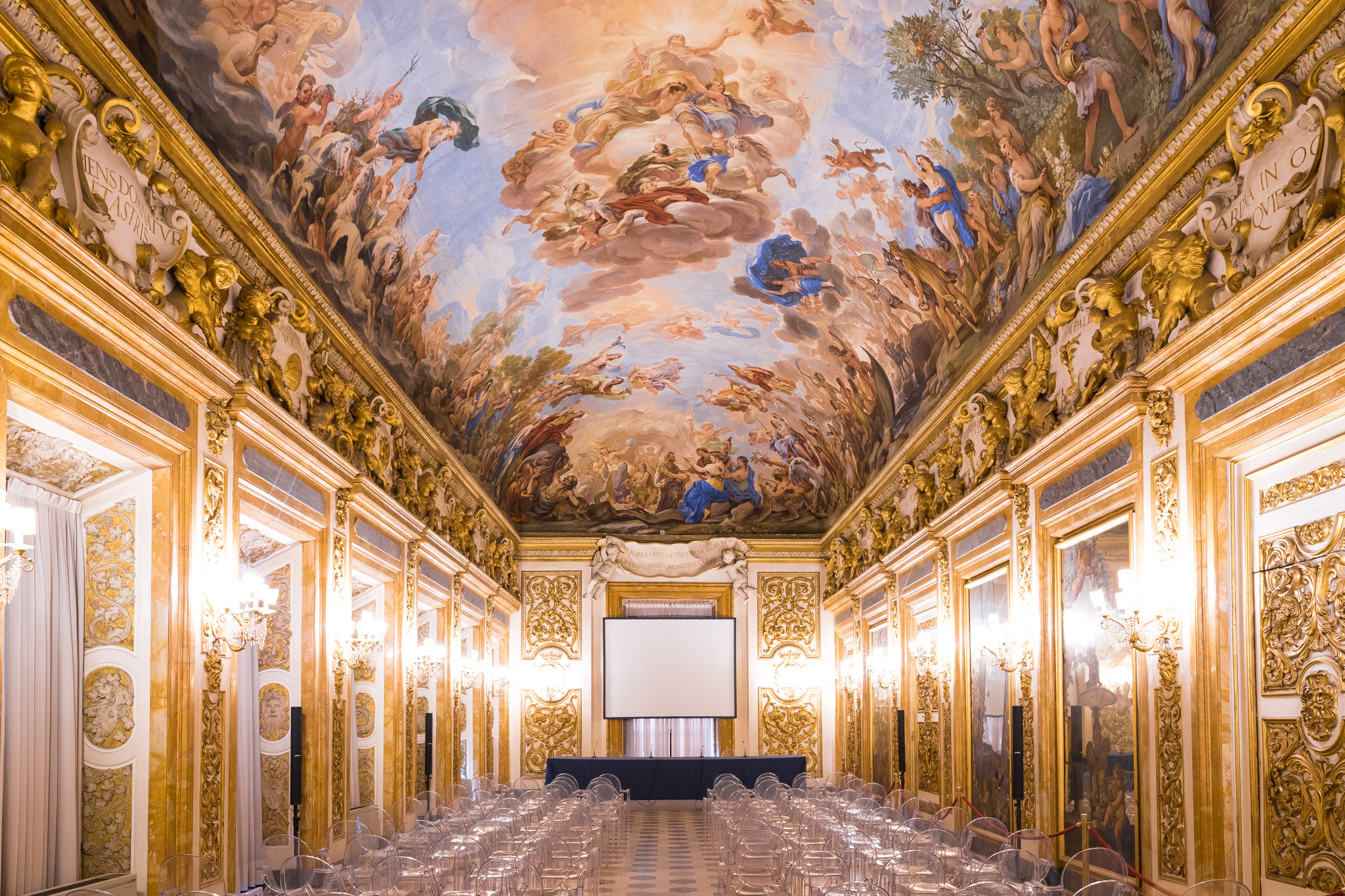 Stepping out of the Magi Chapel is like being thrown forward in time, as you’re suddenly surrounded by modern furnishings and a space reminiscent of Risorgimento-era Italy rather than the colourful artist’s workshop you were just in. The last room on the tour is the Luca Giordano Gallery, painted in the 1680s in the late-Baroque style. If the chapel was an early testament to the Medici’s rising power, Giordano’s larger-than-life decoration stands as a tribute to all they achieved throughout their rule. Portrayed through the lens of mythology, the ceiling frescoes depict the four cardinal virtues – Prudence, Courage, Temperance and Justice – flanked by eight episodes of mythological scenes: The creation of man, Adonis killed by a boar, Neptune and Salacia, Triumph of Bacchus, Minerva, Triptolemus and Ceres, The Rape of Proserpina and the di inferi.

It’s here, in this hall, that the Medici attain their much-sought after goal: at the centre of the ceiling Giordano painted the Apotheosis of the Medici Dynasty, with Jupiter sitting atop a majestic cloud surrounded by members of the Medici family, Cosimo III, his sons Gian Gastone and Ferdinando, and his brother, cardinal Francesco Maria. Each mortal figure has a star painted over their head, symbolizing their long-awaited ambition of reaching the heavens thanks to Galileo Galilei, who dedicated Jupiter’s four largest moons to the Grand Dukes, his long-time patrons.