Frogs’ legs, fried brain, chicken hearts and “fake tripe”: it doesn’t sound glamorous and there’s not a bistecca in sight, but that’s exactly the point. I checked out a rare new trattoria in the Oltrarno that’s bucking the trend for tourist-friendly fodder. For a city with such excellent culinary heritage, it’s not often that I feel truly excited about a new restaurant opening in Florence. Competition is high, rates even higher and homogenous poke concepts or pasta restaurants seem to reign supreme. I don’t mean to sound pessimistic about a city I love, other than to say I was very, very excited to chance upon Dalla Lola when it opened last summer.

The 30-seater trattoria is run by four friends on quiet via della Chiesa, just off piazza Santo Spirito. Matilde Pettini is the creator and sole shareholder, who oversees it all with her organised chaos. Then in the kitchen, there’s Denise, tirelessly hardworking and full of bright, creative ideas, and Edoardo, “punctual, precise, studious and lovable”. Finally, there’s Paolo, Matilde’s right-hand man and Dalla Lola’s first diehard supporter. Pettini comes from a long line of Florentine restaurateurs. Her great-grandfather opened Trattoria Cammillo in 1925, a prestigious Oltrarno institution that has remained a favourite with well-heeled Florentines and A-list celebrities for almost a century. Her grandparents and parents virtually grew up in the restaurant kitchen and many of Matilde’s earliest memories revolve around cooking too. “I am very attached to the stories and traditions of my family’s past. Dalla Lola carries forward the most important principles of Cammillo—that quality and consistency always pay off—except that we do it in a far more homely atmosphere.”

The name Dalla Lola is also old, a tribute to the Signora Lola who ran a little milk bar here back in the Seventies. Over the years it morphed into a cheap and familial lunch spot serving a few homemade dishes. “I remember Lola in the early 2000s,” Matilde says. “I wanted to continue her informal, homely feeling. Above all because a relaxed atmosphere makes us happy, too!” The bar’s real name was Il Chicco di Caffè, but everyone from the neighbourhood would simply refer to it as “dalla Lola,” and so the name stuck.

Still, the first time I meet Matilde, she seems anything but traditional. With fuchsia streaks in her hair and a mischievous energy, she’s busy extolling the virtues of a funky natural wine to the diners on the table next door to me. I ask her about Dalla Lola’s story. “More than a dream, I’d describe it as an adventure,” Matilde says, with a smile. “Living in this neighbourhood, I realised there was nowhere that could welcome residents at reasonable prices with that convivial atmosphere anymore. Tuscany’s culinary culture is huge and presents many possibilities: produce, history and people. Despite this, I notice that many restaurants often have no choice but to bow to the demands of the market, which is composed, as we all know, mostly of tourists. So, they give in to monotony.”

The menu at Dalla Lola is inspired by lesser-known Tuscan cuisine, a riff on a traditional dish of frogs from Maremma, some delightfully moreish fried sage with chicken hearts or perhaps lingua e sedano (tongue and celery). Simple yet adventurous, they are centred on the cheap ingredients that are at the heart of Tuscany’s cucina povera. “These forgotten old recipes have fascinated me ever since my mother gave me my first Artusi recipe book. (Everyone in the family has their own!) I often leaf through it looking for inspiration, for something old, but new, to come up with.”

Naturally, vegetables play a huge part in creating a menu with low prices—Dalla Lola’s antipasti cost 7 euro, primi 8 and secondi 9—without budging an inch on quality. “With a little study of ‘antiquated’ recipes and the raw vegetables we have at our disposal, it is possible to create exceptional dishes with low environmental impact and food cost. Just think of caponata: a Sicilian dish that, if made well, doesn’t remotely make you feel deprived, yet it is historically a vegan and gluten-free recipe that would have been a ‘poor’ dish.”

Dalla Lola’s trippa finta (fake tripe) is even more memorable. Made with eggs, Parmesan and breadcrumbs and served in a rich tomato sauce, it has the toothsome texture of tripe, despite being vegetarian. For Matilde, the dish pokes fun at the inflated prices given to tripe, once a workers’ dish, in some touristy spots.

Like with the food, the small and ever-changing list of wines at Dalla Lola are dictated by Matilde’s moods and emotions. On her days off, she’ll often go driving around the Tuscan countryside and beyond, searching for that new ancestral winery or small-scale organic vineyard that produces a few bottles of something exceptional. “The question of wine is very close to my heart because so often restaurants get stuck on specific types and on a model: the one that sells. What sells is not always excellent and, more than anything else, how is excellence evaluated? According to labels and numbers.”

“I want my guests to taste Tuscan Sangiovese if that’s what they want, but how about a very young one cut with Trebbiano and served cold from the fridge? I’d like them to discover that unfiltered wine is not ‘dirty’ unless it shows certain signs, that a ‘funky’ wine is heartfelt and fun, like jazz in the early 1900s. I strongly believe that there’s no such thing as good wines, but simply wines that people like. Ancestral wines, in my opinion, have the ability to put us at ease without the pressure of what critics and experts think.”

Without further ado, wander down to Dalla Lola and get yourself some crispy chicken hearts with a cool glass of natural wine before the word gets out any further.

Dalla Lola can be found at via della Chiesa 16R. Closed on Sundays. 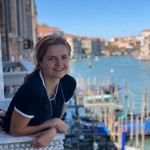 Born in London, Phoebe Hunt moved to Florence for a summer and never left. She’s been an au pair, done a stint cooking in a Tuscan restaurant and posed for Renaissance-style paintings, but mostly she works as a travel journalist. She has a degree in Sanskrit from Oxford University and has written for a number of international magazines, including National Geographic, Conde Nast Traveller and Lonely Planet.