While walking to the Uffizi Gallery I was passed by a man on a bicycle wearing a t-shirt with Caravaggio’s Medusa emblazoned on his chest. It was a fitting sign since I had driven into the city on a mission. Having reserved one of the last time slots for the day, I queued up with the countless visitors, passed through the metal detectors and made a beeline past Giotto, Botticelli and Leonardo. No time. I had something to see. A couple of days earlier, a work trip had taken me to Maremma. Once the job was done, another detour was on the agenda, toward the coastal Tuscan town of Porto Ercole to see the tomb of the Baroque master Michelangelo Merisi, aka Caravaggio.

Like everyone on the planet, Covid turned my life upside down. In the weeks before the pandemic, I was a chef in New York City and cooking on national television. Then, one day, it all stopped and everyone had a lot of time on their hands. Now I live in Tuscany, just outside of Florence, the place that 25 years earlier lit the spark that would become my career in food and Italian culture. The move also gave me a new perspective on the food world and how things have changed since social media made its mark on the kitchen. Writing down my experiences has brought me to an understanding that I was lucky to have cooked during a sort of “Culinary Renaissance”. Chefs found fame taking old recipes and applying new techniques that dazzled people’s appetites both in the dining room and then on TV. But we’re not in that renaissance anymore. We have entered the “Culinary Baroque”. As a young cook, if you wanted to know what a chef was doing, you had to either buy their books or work in their kitchens. Now a swipe of the thumb allows you to see what any chef is doing in any kitchen around the world: it’s getting harder to distinguish one talent from another.

Turning to the masters of art and food was something I always came back to when trying to find my own culinary voice in the Michelin-starred world. It was when I first saw Caravaggio’s The Calling of St. Matthew that it all clicked. While artists were gilding their works with gold leaf and vivid colors, depicting religious scenes and utopian landscapes, Caravaggio was isolating the action and forcing focus. The light and shadow brought mystery while also being economic.  This was how I wanted to cook. While other chefs were using gadgets and tweezers, I was going to use fire, my hands and hard learned technique. If some rules got broken, so be it. That was my plan anyway.

In my deep dive on Caravaggio, I came across an article in The Florentine from 2010 about the discovery of hundreds of bones in an old Porto Ercole crypt, which experts claimed could contain those of Caravaggio, solving the 400-year-old mystery of his final days and resting place. Armed with the DNA of people from his hometown with the same surname, they were able to establish that they had in fact found the artist’s bones and, with much fanfare, crafted a stone tomb to put in the town square where fans and history buffs like myself could come to pay their respects to the visionary, yet troubled, artist.

So, with the AC on full blast, I made my way to Porto Ercole. However, once there I was met with surprise. The tomb was gone. Some frantic Googling informed me that the tomb had been moved to the local cemetery just outside the city. Back in the car, I came upon a modest graveyard next to a boat and a camper storage lot on the outskirts of town. Inside the burial ground, among a few people tidying up and bringing flowers to their loved ones, I saw the tomb. A simple stone coffin-shaped tomb with a ceramic bowl of fruit made to look like one of his early still lifes. Caravaggio’s final resting place may be flanked by laurel bushes, but around and in front of it lie patches of dead grass awaiting the arrival of future residents. While there’s no more appropriate place for the remains of a person than a cemetery, it was hard to wrap my head around one of the world’s greatest historical artists sharing the space with locals of today and tomorrow. Michelangelo is in the Basilica of Santa Croce. Raphael rests in the Pantheon.  Caravaggio? Down the street, next to a boatyard and gas station. Standing there, I couldn’t help the awkward feeling as a woman across the way with flowers in her hand viewed me as just another tourist coming to stand in front of Caravaggio’s tomb and take a picture before getting back in the car. If Caravaggio was standing next to me, he might have repeated what I was thinking to myself, What am I doing here?

Needing some answers, I Googled some more. Apparently, after the ceremonial display, which brought Caravaggio’s bones by sailboat to the port city and placed them in the tomb, things (like in Caravaggio’s life) got a little murky. Once the fanfare was over, life went back to normal in Porto Ercole. Concerns about the placement of human remains, the attention the news was drawing and the fact that some still felt like they might not even be the artist’s bones at all culminated in the decision to move the tomb out of the city to the new cemetery. And as we say in NYC, that’s that. Now, several people a year come to Porto Ercole wanting to see the final resting place of the Baroque master, only to change their plans once they discover that the location is well beyond walking distance. It seems strange for a guy whose face was on the 100,000 Lire banknote.

Back in the halls of the Uffizi, I made my way toward the rooms containing three of Caravaggio’s masterpieces, Sacrifice of Isaac, Bacchus and his Medusa (who I had seen riding past me on a bicycle earlier). I told myself I was there for the art, but I was really there because I felt bad for Caravaggio. Someone so revered to be finally found and then put somewhere so common and out of the way just didn’t seem right to me. I felt compelled to give his work a few minutes of my time and reflect on it the same way the woman I had seen in the cemetery had brought that fresh bouquet of flowers. After paying my respects, I made my way past the Caravaggio tote bags, t-shirts and refrigerator magnets in the gift shop and back out into the summer heat for some reflection and a strong spritz.

Caravaggio was a troubled man, which might account for some not wanting a shrine to him in their backyard. For me, that’s what makes his work all the more relevant. As a chef, you spend your career working side by side people who share many of Caravaggio’s talents and darker attributes. I felt like I knew the guy, or at least had met him once or twice in passing. As for his bones turning up after 400 years?  It’s not the first time he’s popped back into the headlines. His portrait of Bacchus was a gift from Cardinal del Monte to Ferdinando I de’ Medici, but at some point it was moved only to be rediscovered in the Uffizi storages in 1916. He spent a good part of his life disappearing and then turning up somewhere unexpected, armed with his work to show just how great he was. Michelangelo Merisi da Caravaggio was always reinventing himself.

Is it worth a drive to Porto Ercole just to see Caravaggio’s final resting place? If you’re an amateur historian like me, maybe. If you do, I’d recommend going on a brisk autumn day.  Preferably with some light rain. Give the guy the drama he so deserves. On the way back to the car, I focus on the art and how I can apply that to my trade. Another reinvention. I feel more at peace. I hope he does, too. 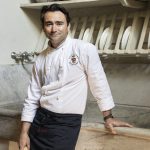