Deep in the Tuscan Maremma, there lies a remarkable trace of Italy’s ancient history.

Long before the Roman Republic made headway through the peninsula, much of Tuscany was home to another vastly cultured civilization: the Etruscans. Though this ancient civilization is the subject of research, an aura of mystery still surrounds their way of life. The traces left behind continue to help archeologists piece together the life of these ancient people, but sometimes they leave us with more questions than answers. Such is the case with the curious Vie Cave, a vast network of roads linking the areas between Sorano, Sovana and Pitigliano, each one of which was dug into the tuff rock by hand, some as much as 20 metres deep. 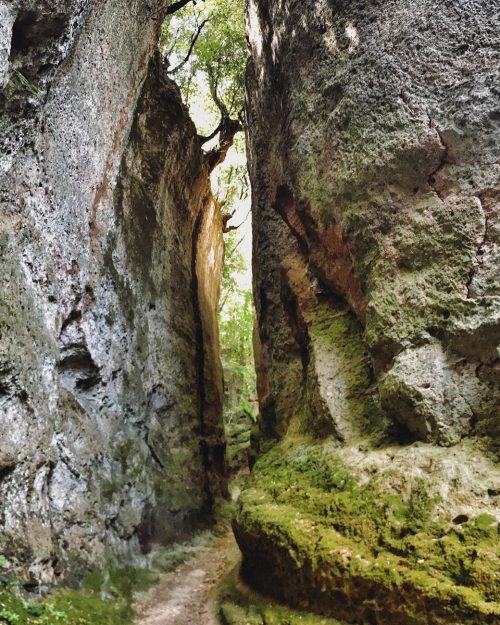 The purpose of these roads has long been debated: were they intended for channelling water down from the high plains? Could they have been communication routes? Had they been designed in their zigzagging nature to help prevent enemy attacks? Or maybe they were ceremonial routes? It’s likely that we’ll never know the original reasons for these roads, but it is nevertheless important that interest in them never dies. Indeed, the area is popular among nature enthusiasts, given the roads can provide days worth of hiking experiences, not to mention history buffs. But although part of the Vie Cave is formally included in the Città del Tufo Archeological Park, whose mission is to promote and protect the Etruscan and medieval heritage within its domain, they are still undervalued.

Enrico Papini, head of the association I Custodi delle Vie Cave, said it is precisely this that he would like the public to understand about the Vie Cave, which exist because “people have always used them as he saw fit”. Their daily use, as communication routes, shaped how they are today. Continuing to use them is the most natural system for maintaining them and keeping them alive. Their use will guarantee their maintenance—until today, this has been done by shepherds, farmers, wayfarers and merchants—and their charm as a testimony of the inexorable passage of time.

Cristiano Rivela, a local hotel owner and founder of the Love&Food Hotel project aimed at promoting southern Tuscany, explained that his association is focused on “raising economic resources for the promotion of the Città del Tufo’s historic and artistic patrimony. Currently, local administrators lack a plan for developing the territory. The Vie Cave are largely abandoned, so they continue to deteriorate with the seasons.”

Though the Archeological Park does its part, it is managed by third-party cooperatives and work is conducted through public contests and four-year contracts, so even here it risks being slowed down and continuously altered.

Papini echoed Rivela, stating that while interest and attention towards this patrimony is growing in recent years, its preservation is also overseen by the local administrations, which often only intervene when damage has occurred. The fault isn’t necessarily their own, however, “because current legislation often doesn’t help protect the Vie Cave; on the contrary, it limits any actions that could be taken.”

The answer to jumpstarting meaningful and long-lasting preservation efforts may lie with the public, both locals and tourists. Grassroots movements like those of Rivela and Papini go a long way in bringing the Vie Cave into the spotlight, but more work is needed when you’re jockeying with the likes of Florence, Siena and the Maremma seaside. Both individuals pointed out that the roads are generally perceived by locals as little more than traces of their heritage, ones that do little to affect their day-to-day lives, particularly today, when the rhythms of our lives are increasingly hectic. But the effect of caring unsurprisingly brings lasting consequences for the development of the area as a whole.

The Vie Cave, Rivela stresses, are unique in the world, and when it comes to this territory, they “could be the driving force behind the development of a new political and social situation in the area. If we’re able to make the outside world understand the importance of the Vie Cave, the reaction on local development will be an increase in the perception and interest from both the public and the private sector.”

As responsible tourism gains popularity in the face of crushing mass tourism, the work of people like Rivela and Papini may be exactly what is needed. The tuff roads have the makings of acting as a resource for local sustainable development, but drawing crowds to this corner of Tuscany may be no good if they trip on an overgrown branch deep in the Vie Cave.