The Basilica of San Lorenzo is one of the oldest churches in Florence, said to have been consecrated by St. Ambrose on Easter day, 393 CE, even though the building we see today dates to the mid-1400s upon a design by Brunelleschi. The fascinating façade-less church is no stranger to glory, and while it may not be home to the variety of illustrious burials one might find in Santa Croce, it takes the cake for being the resting place of one of the most powerful families in pre-Unification Italy, the Medici. 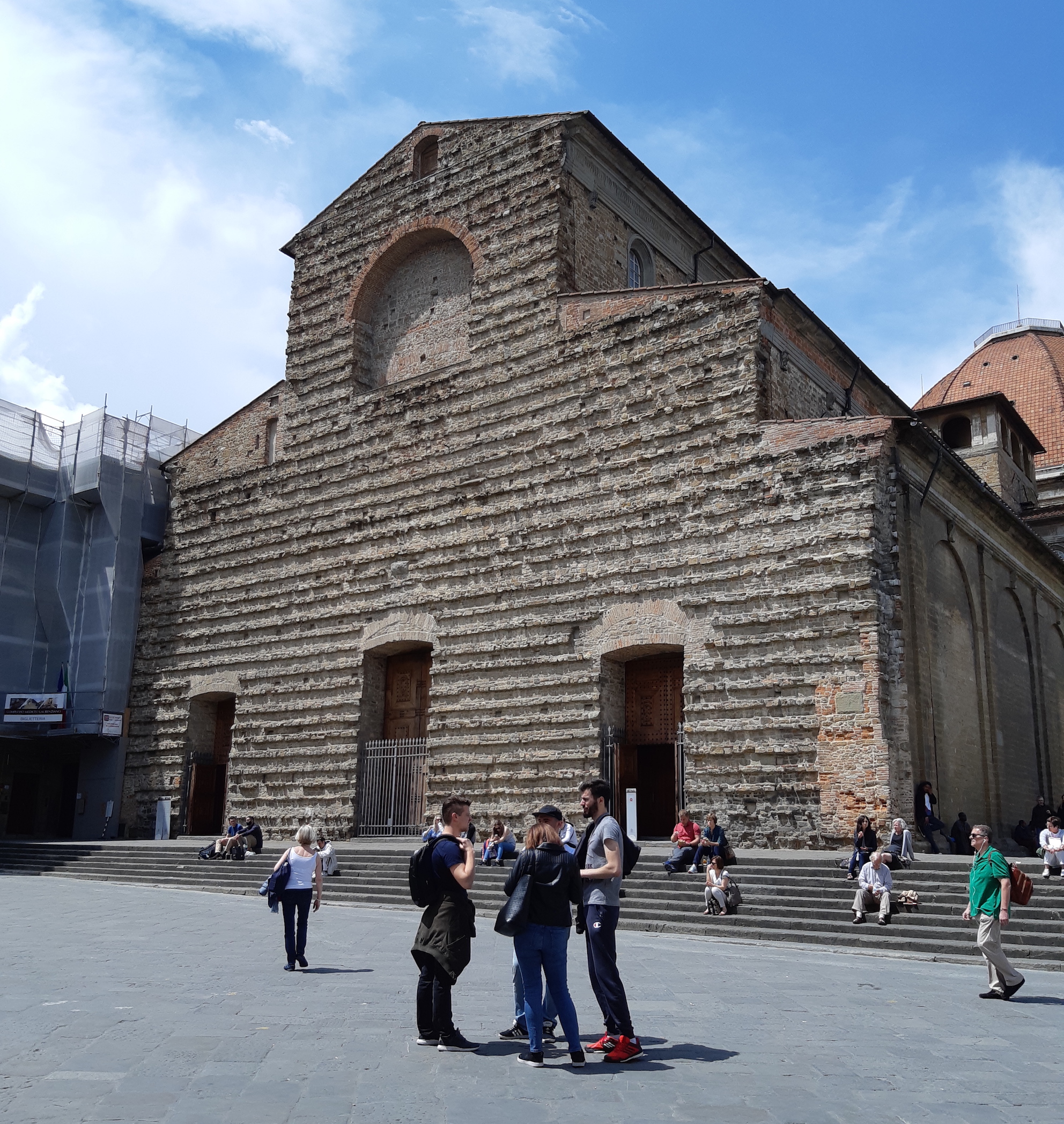 San Lorenzo is broken up into three distinct areas for visitors to enjoy. The Medici Chapels, round the back of the church, are a separate site bureaucratically speaking. The basilica complex comprises the other two elements: the church itself, and its adjacent cloister which gives access to the famed Laurentian Library, whose staircase and reading room were designed by Michelangelo.

San Lorenzo: The cloister and crypt 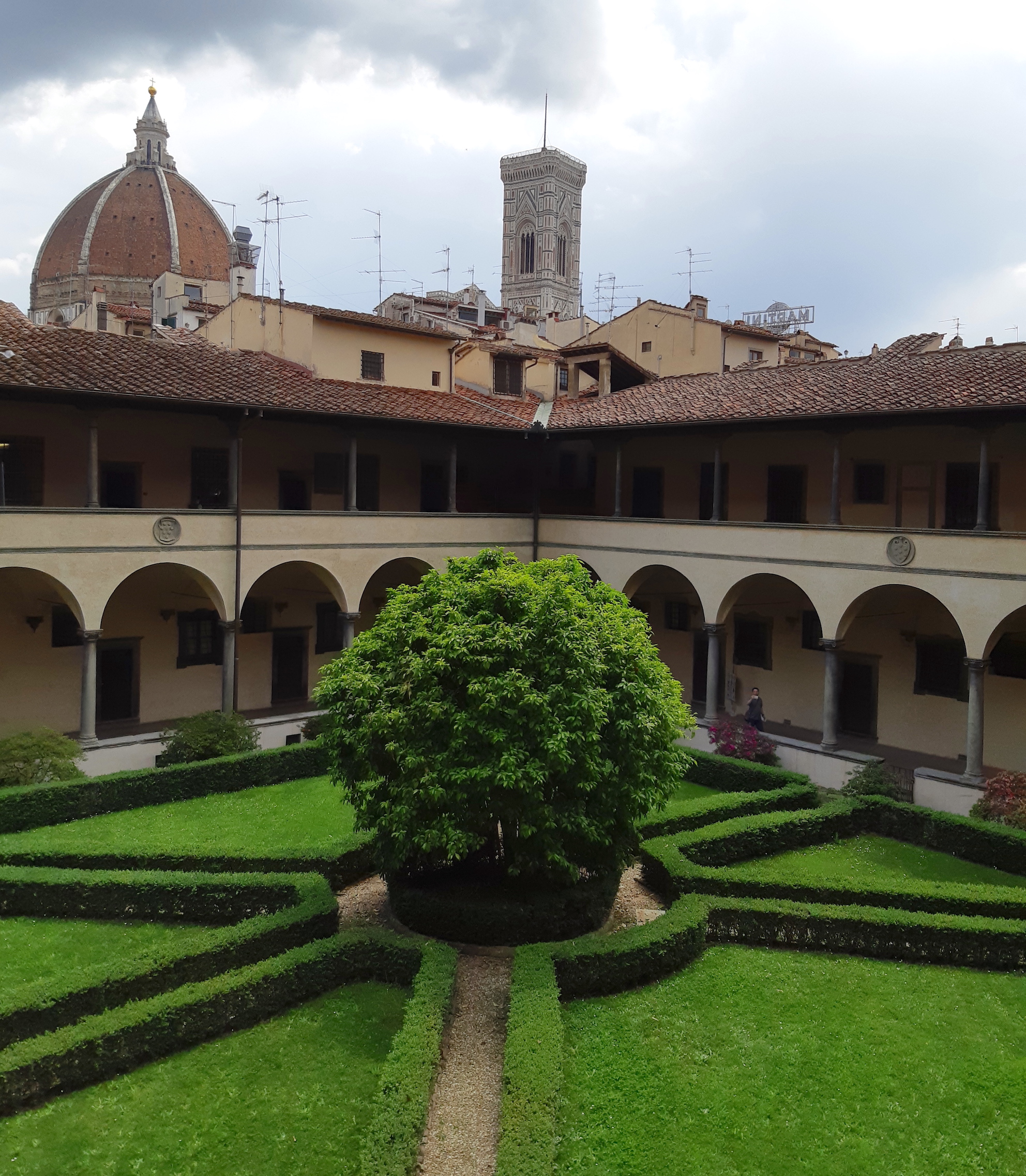 The first part of the visit starts in the main cloister, the Chiostro dei Canonici, whose very name attests to the fact that there were once canons living on the grounds. The cloister was restructured between 1457 and 1462 by Antonio Manetti, a student of famed architect Filippo Brunelleschi, whose influence can be clearly seen in the pure, Renaissance style of the architecture, including the symmetry and proportion of the space.

The visit continues to the crypt, home to the church’s many treasures and the tombs of two men who changed the course of history: Cosimo the Elder, the first member of the Medici dynasty, and Donatello, the illustrious sculptor. 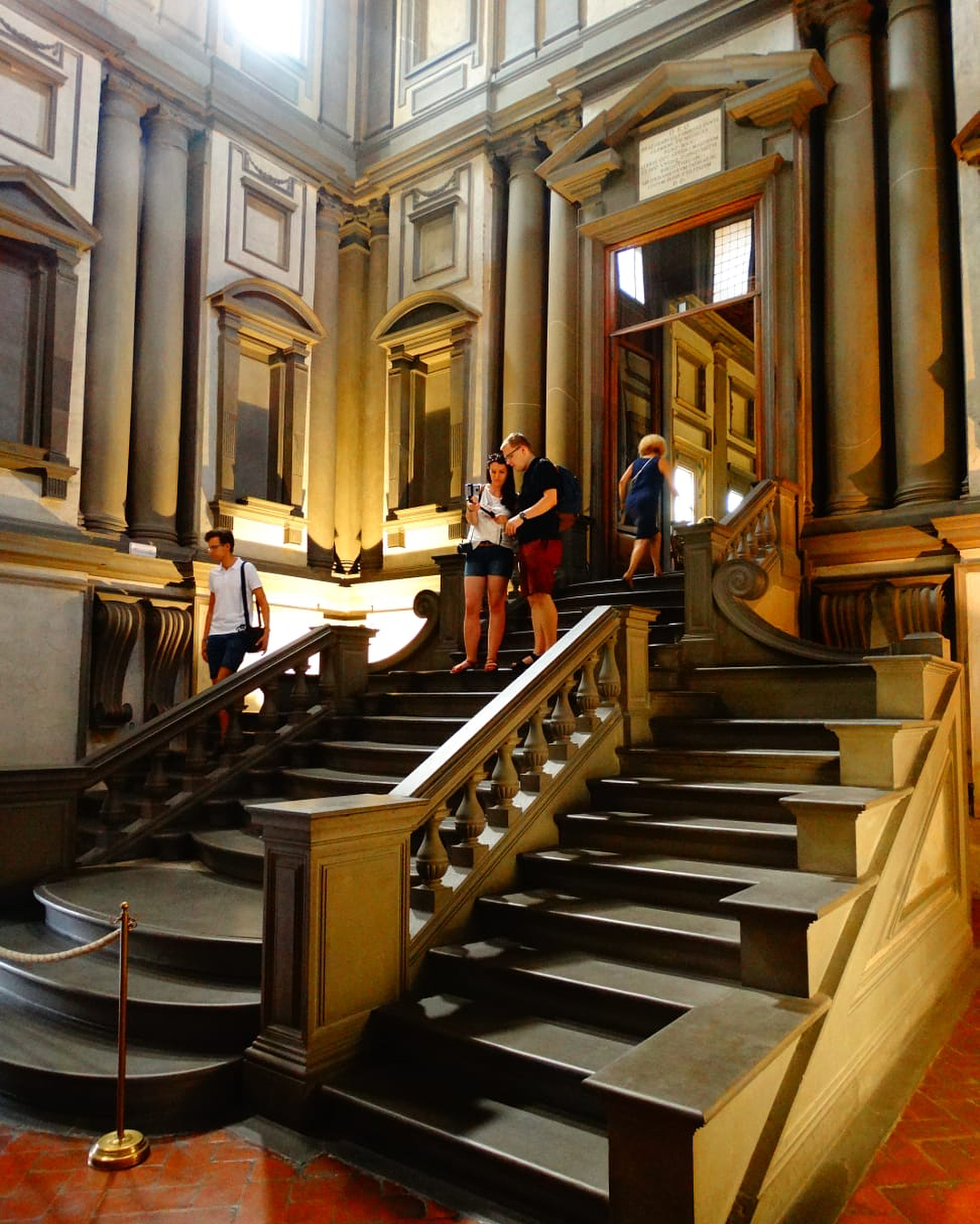 Back upstairs, the next stop is the Laurentian Library. This part of the complex costs an extra 1.50 euro, but it’s highly worth it. This is where you’ll find the staircase designed by Michelangelo Buonarroti, the man behind the David and the ceiling of the Sistine Chapel. Interestingly, though, it was Bartolomeo Ammannati who actually finished the stairs following Michelangelo’s designs. The vestibule where the staircase is located is clear Mannerist in style, with double columns, corbels and gabled niches, all perfectly harmonious as a whole. The library at the top of the stairs contains the Medici’s nearly 11,000 manuscripts by some of the greatest writers in history, from Pliny and Sophocles to Marsilio Ficino and Pico della Mirandola, making it one of the greatest resources for scholars of classicism and humanism.

The Church of San Lorenzo and the Old Sacristy 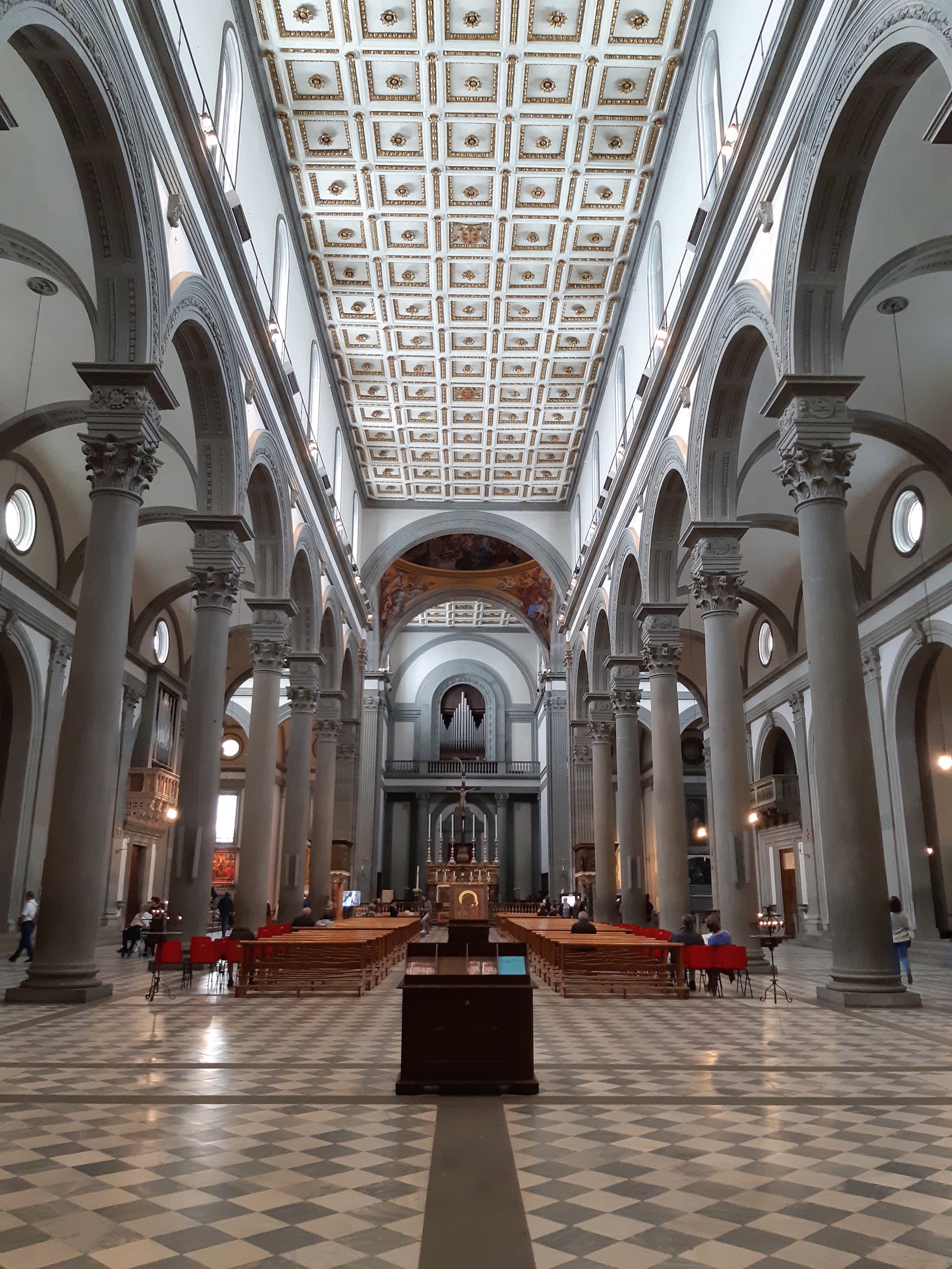 Now it’s time to visit the basilica (which is just another word for a large church), which was originally designed by Brunelleschi. Right from the entrance, the harmony of this Renaissance space can be perceived. The rounded arches, the evenly spaced columns, the perfect symmetry: they all combine to offer a sense of perspective and balance within the building. But to really understand why this church is considered a preeminent example of Renaissance architecture, the Old Sacristy is the place to see. 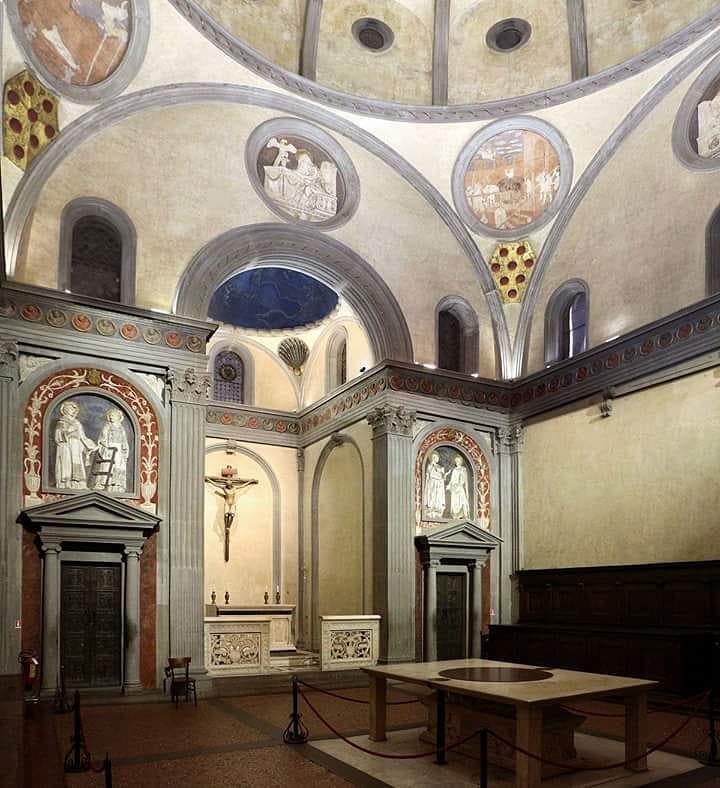 Cosimo the Elder’s father, Giovanni di Bicci commissioned this space to Brunelleschi in 1419. Brunelleschi envisaged a design based on geometric harmony, strictly using squares and circles in its floor plan and elevation. The decoration of this space is minimal; Brunelleschi alternated pietra serena and white walls to create rhythm that was not intended to be “ruined” by painting; the roundels by Donatello in the quinches were added later. The Old Sacristy is where you can find the tombs of Giovanni and his wife Piccarda Boeri, in the massive structure in the centre of the room, as well as Piero the Gouty and Giovanni, Lorenzo the Magnificent’s father and uncle, both of whom are in the marble and bronze tomb at the entrance to the Sacristy, made by Verrocchio in 1472.

Donatello and the San Lorenzo pulpits 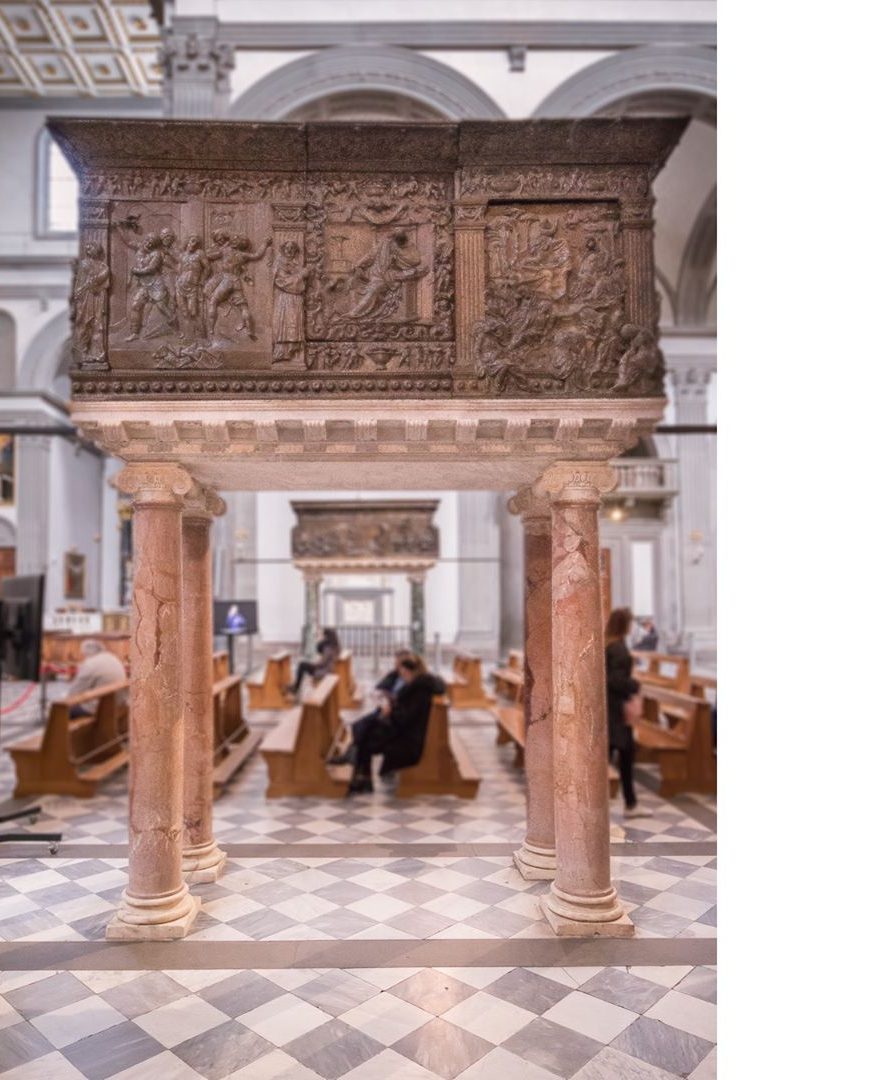 If you aren’t yet convinced that San Lorenzo is a haven of Renaissance style, let’s take a look at the dual pulpits flanking the central nave. The artist’s final commission, Donatello worked on the two pulpits in the 1460s alongside his assistants, but interestingly, they didn’t take on their current appearance until the mid-1600s. The bronze panels designed by Donatello and his pupils were assembled in 1515 and they weren’t mounted onto their marble stands until a few decades after that. The Passion Pulpit and the Resurrection Pulpit, as they’re known, depicts episodes from Christ’s life just prior to, during and after the Passion, and the martyrdom of St. Lawrence. The panels are noted for their extreme dramatism, a style that characterized Donatello’s later works, and the dense iconography in each one.

Fun fact: it’s not known for certain if the Passion Pulpit can fully be considered the work of Donatello. While the Resurrection is widely regarded as his, the other was completed so late in the artist’s life that scholars doubt he was well enough to contribute to its actual creation, though it’s commonly believed that the iconography is his design.

A gallery of Tuscan creativity 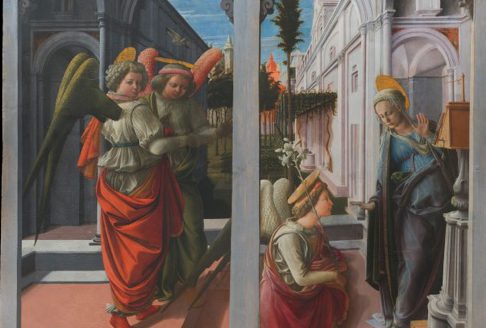 One of the other key things to note about the basilica is the quantity of paintings lining the walls and side chapels, offering an overview of Tuscan creativity through the centuries, with works by dozens of major and minor artists from the most important movements in art history. Early Renaissance works include pieces by the Florentine workshop and Northern European School, and artists like Desiderio da Settignano and Domenico Ghirlandaio, while late Renaissance pieces are featured with Rosso Fiorentino, L’Empoli and Bronzino. And despite being a wholly Renaissance space, the church is also home to a lot of artworks from later eras, including several pieces from the 18th and 19th centuries, and even a 1964 painting by Pietro Annigoni, a predominantly Renaissance-style painter despite the prevailing modernist tradition of his time.

But to bring it back to the Renaissance, a visit to the Basilica of San Lorenzo can’t end without seeing a Filippo Lippi painting up close, so let’s head to the Martelli Chapel for a look at his Annunciation, made in full Lippi style with a touch of Flemish influence. Believe it or not, the painting has hung in this location since it was finished in the 1440s. That’s 50 years before Christopher Columbus arrived in the New World! Rather remarkable, no? Much like the San Lorenzo as a whole.