In a small corridor in the grand Palazzo Vecchio, the seat of Florentine government since its first stone was laid in 1299, a carved mask stands before a background of crimson fabric in a wood and glass case. Crimson is a significant color in the life of the man of the mask, in that when he first meets the love of his life, she is dressed in crimson, and the vision of his love causes his lips to tremble and his heart to palpitate. It is then, he says, that he knows, that an entity lords over him. And that entity is “Love”. 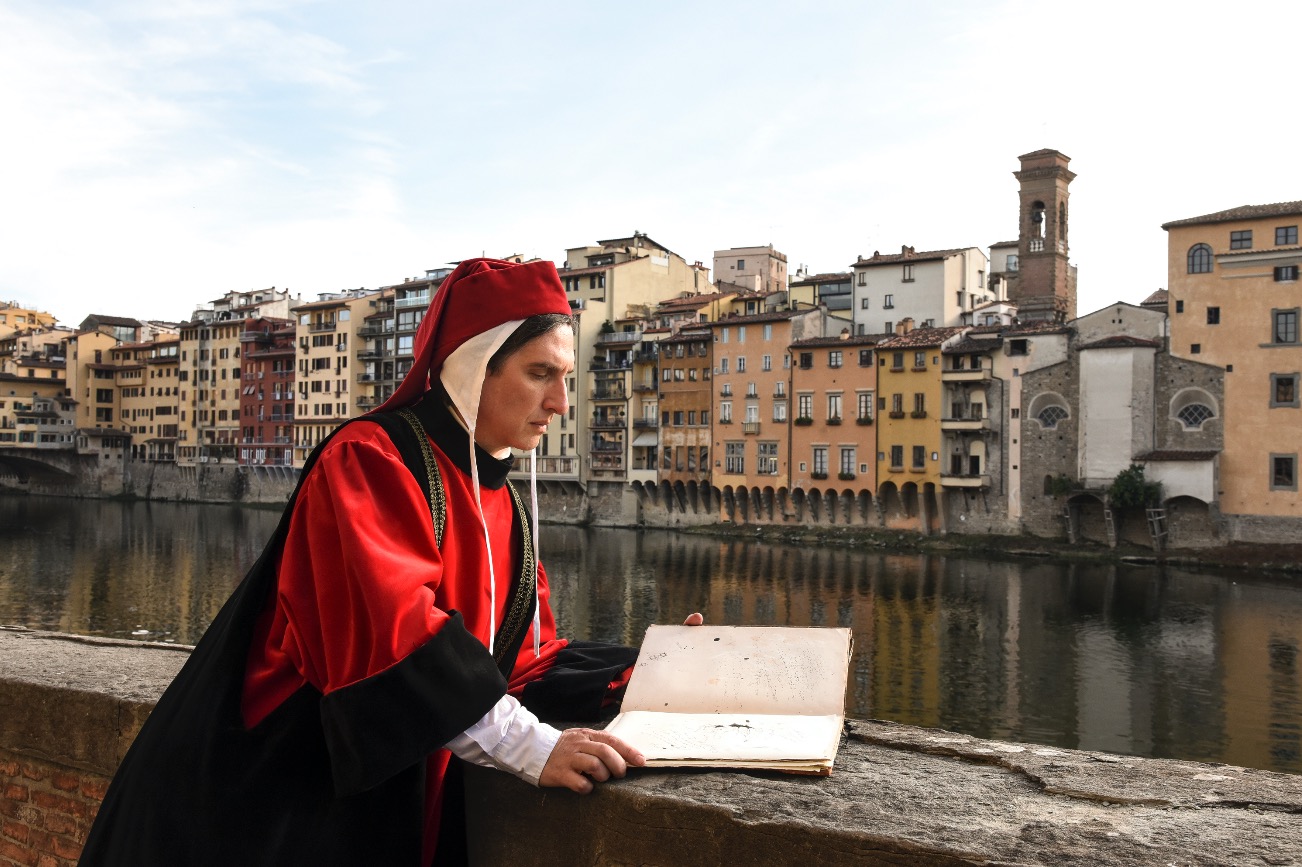 Hershey Felder as Dante Alighieri in his upcoming film, “Dante and Beatrice in Florence: A Musical Film”, airing November 28, 2021 / ph. @marcobadiani for The Florentine

The man of the mask who tells this story in his first novelette, La Vita Nova, is Dante Alighieri, Italy’s Supreme Poet, who brought together various Italian vernaculars into one poetic tongue, which is the basis of the Italian we speak today. In La Vita Nova, composed in the early 1290s, just as the Duomo was beginning to take shape, Dante does not speak in high Latin, but in what he calls the “vulgar tongue”, or what we might call today just “shooting the sh*t.” Dante speaks of the impossible love he has for this beautiful Beatrice whom he met at a Month of May party at her father’s house when she was eight and he was nine. He was so smitten that, for the rest of his life, this young girl, whom he met again when she was a young woman, became his ideal love, even though she married another and lived a life exclusive of him. He tells us this in a pretty straightforward fashion, also informing us that he suffers terribly when he isn’t near her and acts like a complete dolt should he end up in her presence. Everyone in town knows. And when she dies a young woman of 24, so bereft is he that he cannot bear life without her. Until he sees a beautiful woman on the street who moves him and then he feels guilty that he might feel something for another. In the end, he looks away and keeps his ideal love as the only person able to bring him into Paradise in the Divine Comedy, his ultimate poetic work. Sure, he was married to someone else, had three children and never dedicated a work of art to her, and never even mentions her name. Dante holds his art on a different realm, making it even more real than his reality.

The most affecting thing about La Vita Nova is that it feels like Dante really is just “shooting the sh*t” with us, give or take 700 years. Regardless, he feels present, not as if he is speaking to us from the past and from the grave, but as if he is sitting next to us telling us his story. Whether his “Beatrice” and her lovesick effect on him is merely a construct for a poet to accomplish his goals or he really is giving us his living journal is up for grabs. It really is hard to know, but it doesn’t matter because Dante’s connection to Beatrice, whether Beatrice and the situation were real or not, feels entirely real. Dante, in a strange way, is our everyman lover-boy and we get it, and we get him. In fact, it’s all so simple that one can’t help but imagine that what makes art eternal is that it is something we can all identify with. 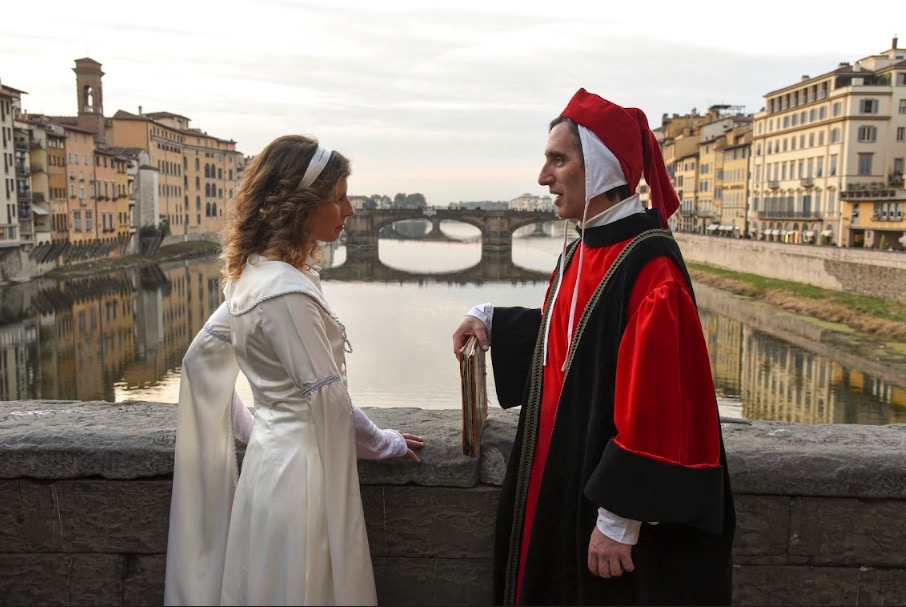 Hershey Felder as Dante Alighieri and Hila Plitmann as Beatrice in the upcoming film, “Dante and Beatrice in Florence: A Musical Film”, airing November 28, 2021 / ph. @marcobadiani for The Florentine

To the best of our knowledge, Dante Alighieri was born in Florence in 1265 and died 56 years later in Ravenna, having been exiled from his beloved Florence 20 years earlier for being on the wrong side of the Pope’s politics. So severe was the sentence against him that, if there was any risk of his returning, he would have been immediately sentenced to death. Two hundred years after he died, the Medici wanted their Supreme Poet back and the Pope knew who not to fool with, and so the order was given from on high. Ravenna said, “You want him, come and get him.”They dug up the grave. No bones were there. Some 360 years after that, a wall in the Ravenna cemetery was being repaired. Within the wall, there were human remains with an accompanying note: “These remains belong to Dante. Please see that he gets them.” Not entirely of course, only the first part was in the note. But the bones were never released and they have never returned to Florence. The tomb prepared for Dante’s bones in Santa Croce remains empty. The statue carved for the piazza Santa Croce at the time, 1865, has a nasty scowl and a long hook nose. The Supreme Poet still seemed to be on the wrong side of things. But in 2008, there was a mock trial and Dante was absolved of all his sins, which were actually loving Florence so much that he wanted his city to be an independent state. Florentines and Florence are special, and he believed they should be recognized as such.

Over the years, images of Dante became increasingly unusual. A fresco in the Bargello is believed to be an original image of the poet, with a fresh face and an aquiline nose, but with time the representation of that nose became longer and more hooked, a sign of a nefarious character. Even Dante’s “death mask” unceremoniously displayed in a Palazzo Vecchio corridor has this nose, although it turns out that the mask was not taken from Dante’s posthumous face. In fact, it is thought to have been carved by Pietro and Tullio Lombardo 162 years after his death in 1483. For all of Dante’s fame, he remained a persona non grata in Florence, the place where he was first driven to compose poetry about the one thing that he believed was his lord to which he would abandon all reason: Love. 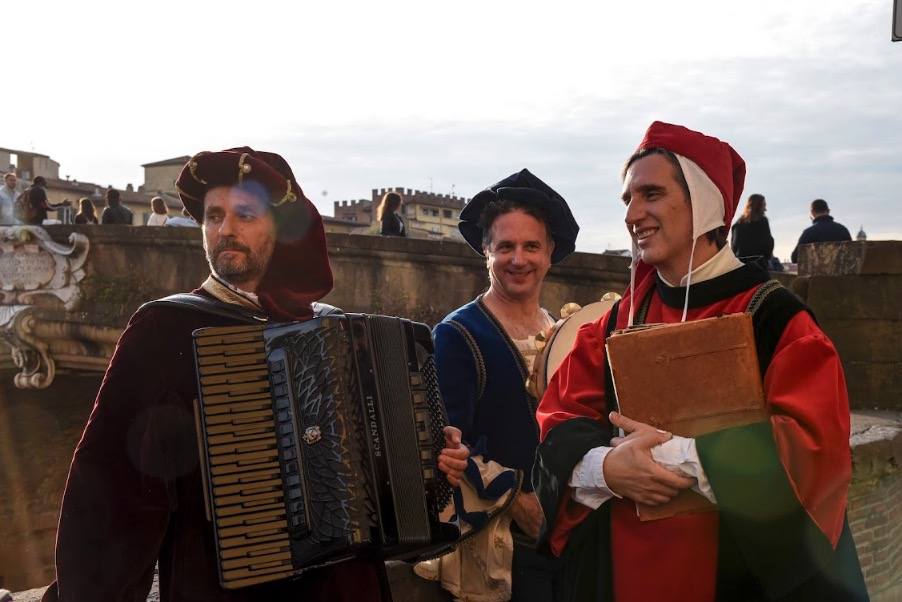 Behind the scenes at “Dante and Beatrice in Florence: A Musical Film”, airing November 28, 2021 / ph. @marcobadiani for The Florentine

In 1921, Professor Fabio Frasseto took measurements of Dante’s skull and secretly created a plaster model of Dante’s face. The face is nothing like the villainous scowl that Dante seemed to have acquired over the years. Instead he looks like a gentle soul, someone who longs for perfect love, maybe thinking he is never quite good enough to actually merit it. The face created from his skull measurements seems more in keeping with the author-poet of La Vita Nova, honestly told about a young man and love. He seems not an icon, but just gently human.

Walking in Dante’s footsteps around Florence, something becomes apparent. These spirits, these ghosts that have made the city what it is: they are still among us. They have infused every nook of this beautiful place we call home, this magnificent centre of art, culture and love that welcomes people from all over the world. It is then that we realize what is eternal is the humanity. It connects all of us. From the very beginning, Dante would always be eternal because he had it right.

Dante and Beatrice in Florence: a new musical film 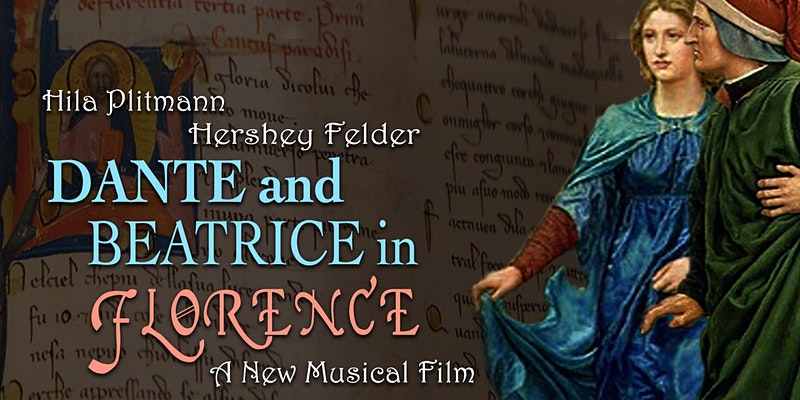 On Sunday, November 28, Hershey Felder returns to our screens as Dante in a world premiere musical film that focuses on the eternal love story between the Supreme Poet and Beatrice. The story begins in the Chiesa di Dante before taking us around the places that Dante frequented in central Florence, including the Baptistery and Ponte Santa Trinita.