On Valentine’s Day, Florence had a triumphant turnout for the One Billion Rising flash mob in piazza della Repubblica. As part of continuing V-Day events in Florence, March 8 sees the opening night performance of The Vagina Monologues, an event that coincides with International Women’s

On Valentine’s Day, Florence had a triumphant turnout for the One Billion Rising flash mob in piazza della Repubblica. As part of continuing V-Day events in Florence, March 8 sees the opening night performance of The Vagina Monologues, an event that coincides with International Women’s Day.

The Vagina Monologues has a long history with the V-Day movement: the play’s creator Eve Ensler started it in 1998. Celebrating its 15th anniversary in 2013, this leading nonprofit anti-violence movement encourages and supports events across the globe created by local communities to raise awareness of violence against women and children and raise donations in support of anti-violence associations.

V-Day activity has raised over 90 million US dollars since its inception in 1998 and has funded over 12,000 anti-violence programs and safe houses in and around Europe, Africa, the USA and Middle East. In 2012, more than 5,800 V-Day events were produced in 167 countries by volunteers, with the funds raised going to organisations such as the Florence-based Artemisia Centro Anti Violenza (http://tinyurl.com/b886w93).

Artemisia offers support for women and children in violent or abusive situations by giving free counseling and legal advice, amongst other special needs. All services are provided by volunteers and professional consultants. Artemisia, which manages a women’s center in the city as well as two additional shelters (the locations of which are secret for the victims’ protection), relies solely on funding from the government, private donations and funds raised through events and performances such as those held as part of V-Day in Florence.

The Vagina Monologues will be performed on two nights and the events will include a charity raffle for an array of sought-after goods and services, including a gourmet dinner for two and an original sculpture piece by local artist Paul Popple.

For the uninitiated, the play is a series of stories, told by women, about love, sex and intimacy, all told with sensitivity and humour. This year’s production marks the return of Celeste Bueno, who directs a group of 15 women performing in both Italian and English (with subtitles) at the new Oltrarno-based Tasso Theatre House, which is part of the Tasso Hostel.

Tickets are 15 euro, with proceeds from the two performances and a raffle going to the Artemisia Centro Anti Violenza in Florence.

Bueno promises that the evenings will be entertaining: ‘Our aim for this year’s performance is to keep it fresh. There is a great group of women of different ages, different backgrounds, different stories; some are working, or studying or looking after families. To bring these women together, from all walks of life, is inspiring. And what V-Day is all about is uniting for a common cause.’ 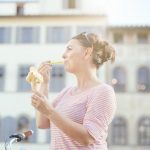 A journalist by trade, adventurer by nature, Nardia Plumridge created the "Lost in" concept one summer's day walking down a sun-drenched street in pursuit of finding the best local venues. Read her book "Lost in Florence: An insider’s guide to the best places to eat, drink and explore" (Hardie Grant) / www.lostinflorence.it

Places to pamper yourself in Florence

Feeling the need for a little pampering in between cultural excursions? As Florence heats up for the summer season, here are some insider tips on places to keep you cool, ...