Standing majestically behind the Basilica of San Lorenzo, the Medici Chapels are one of the five museums that make up the Bargello Museums, reorganized in 2015 into a single institution, along with the namesake Bargello Museum, Palazzo Davanzati, Casa Martelli and Orsanmichele, so although the Chapels belong to the San Lorenzo complex, it’s a different site bureaucratically speaking. They nonetheless remain forever linked in their origins as a celebration of the Medici family and the power they once held in the city of Florence: San Lorenzo was historically the parish church of the Medici, and so it’s no surprise that Grand Duke Ferdinand III of Lorraine chose to move the family members’ remains here in 1791.

The crypt and Treasury 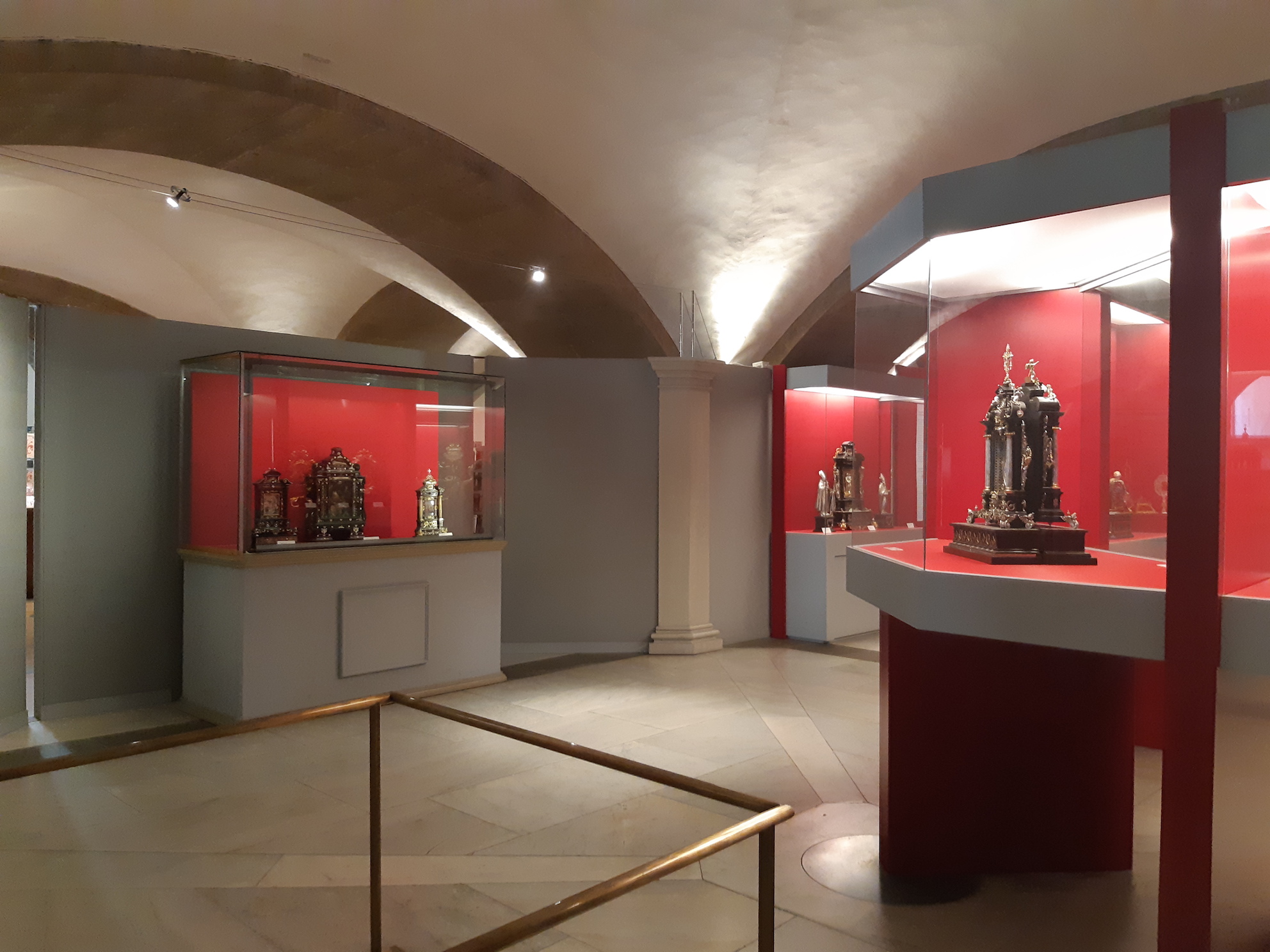 A visit to the Medici Chapels begins in the crypt, one of four sections inside the museum. Here, you can find the tombs of the Medici grand dukes and their families, from Cosimo I to his wife Eleanor of Toledo, Giancarlo de’ Medici to Vittoria della Rovere to the last heir of the Medici dynasty, the revered Anna Maria Luisa, to whom Florence owes the protection of its many treasures. The crypt is a far cry from the splendour one might expect when it comes to rulers as illustrious and powerful as the Medici, its ceiling low, its walls bare and the tombs little more than plaques inlaid in the pavement, the metal barriers surrounding them serving as the only indication that they’re something worth preserving. Even the tomb of young Cosimo, Grand-Prince of Tuscany, for example, is simply tucked away between a robust pillar, a makeshift wall for displaying the church’s treasure and a metal rack of calendars for sale. But don’t let the modesty of the crypt fool you: grandeur is yet to come.

Though a separate site from the rest of the complex, the Treasury included, the Chapels do contain a part of the church’s treasure, which can be perused in the centre of the crypt. Like many church holdings, the Treasury contains reliquaries, liturgical vestments and ceremonial objects, as well as various pieces related to the Medici family, including effigies, medallions and jewellery. The Medici collected these pieces throughout their time in power through purchases and donations, especially objects given by popes Clement VII and Leo X, both members of the family.

The Chapel of the Princes 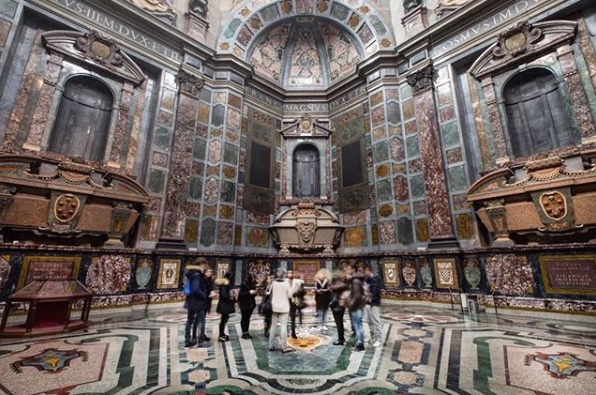 The visit continues to the Chapel of the Princes. This jaw-dropping octagonal space is exactly in line with the splendour fit for a king, or in this case, a grand duke. The mausoleum was based on an idea by Cosimo I to have a monumental family tomb and is decorated entirely in polychrome marble and semi-precious stones. It’s known that Giorgio Vasari, court painter and long-time friend of Cosimo I, was tasked with designing the chapel, but construction didn’t get underway until much later, when, in 1602, the work was entrusted to Matteo Nigetti, who helmed the project until 1650.

As the real tombs are inside the crypt, this space actually houses the grand dukes’ cenotaphs, carved in porphyry and grey granite. There are six in total, each set into a different wall. They’re dedicated to Cosimo I, Francesco I, Ferdinando I, Cosimo II, Fernando II and Cosimo III, each embellished with a dedicatory inscription and a grand-ducal crown. If the dome above the cenotaphs doesn’t quite look like it fits with the rest of the space, that would be because it was actually painted much later, between 1828 and 1837, when the awe-inspiring decoration was completed by Pietro Benvenuti on the orders of Grand Duke Leopold II. Believe it or not, the chapel actually wasn’t finished until just a few decades ago, when the inlay of semi-precious stones was installed in 1962! 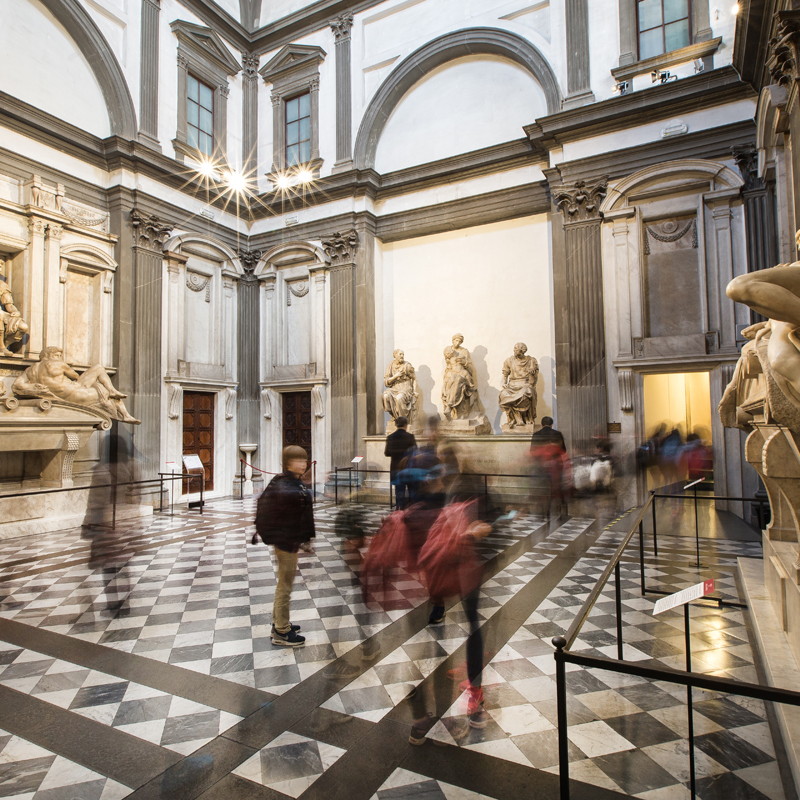 Once you’ve absorbed the grandeur of the chapel, move on to the final part of the visit, containing a renowned set of works made by Michelangelo in the decade prior to his definitive departure to Rome in 1534. Complementing the Old Sacristy in the adjacent basilica, this space, aptly named the New Sacristy, is where four members of the Medici family are buried. It was once accessible via a small door in the church’s right nave, but can now only be visited by way of the museum. When Giuliano, Duke of Nemours, and Lorenzo, Duke of Urbino, died in 1516 and 1519, respectively, the former’s brother, Pope Leo X, commissioned the sacristy to be completed, tasking Michelangelo with the job while taking him off to project of building the church’s façade, which famously remains unfinished to this day. Giuliano’s tomb is decorated with the sculptures of a reclining Day and Night, made between 1526 and 1531. Night, on the right, is portrayed as a young, sleek woman “drenched in lunar light,” so says the museum’s description of her, while Day is depicted as a strapping man, his face unfinished; both allegories are said to reflect Giuliano’s personality, prudent but ready to act, and indeed his statue sitting above the sarcophagus, sculpted as a Roman mercenary, lends credence to this portrayal. 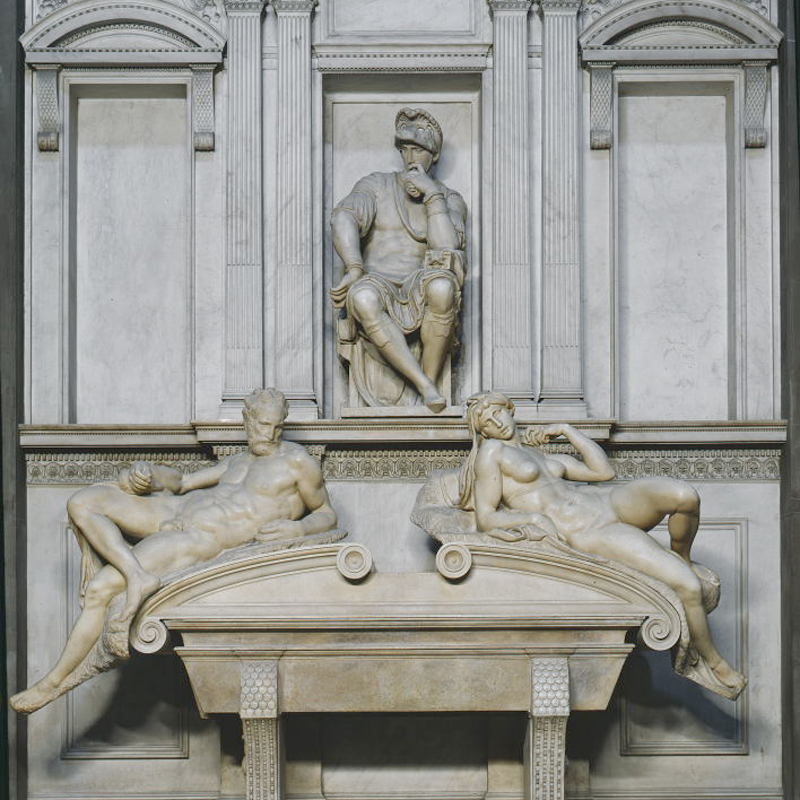 Lorenzo’s tomb stands against the opposite wall and includes the sculptures Dusk and Dawn, with the pensive duke sitting in a niche above. Mirroring this meditative manner, Dusk looks sleepy, as if ready to fall into a peaceful sleep, while it’s sister statue, Dawn, is just awaking from slumber. All together, the four statues represent the inevitable passage of time, which ultimately leads to death. Michelangelo had also intended to sculpt majestic tombs for Lorenzo the Magnificent and his brother Guiliano de’ Medici (who are often mistakenly believed to be buried in the aforementioned tombs), but due to the artist’s departure for Rome, the project never materialized and the bodies, brought to the sacristy in 1559, are interred in a simple sarcophagus at the entrance to the space, topped with statues of St. Cosmas, St. Damian and the Madonna and Child. But when you’re buried in a place like the Medici Chapels, perhaps a simple sarcophagus isn’t so bad, right?