Children were cycling across the pietra serena slabs and locals were tucking into panini in piazza Santa Croce as I perched on a bench beneath Dante Alighieri’s stony stare. Ravenna-born sculptor Enrico Pazzi donated the statue to Florence in 1865 to mark the 600th anniversary of the poet’s birth. Dante stands protectively above our heads, gripping his robes close, with an eagle by his side and four heraldic lions guarding each corner of the pedestal. Seven hundred years on from Dante Alighieri’s death and in the grip of a pandemic that has shifted the axis of our world, we can empathize with the sculpture’s gaze and the poet’s predicament, exiled as many of us are from the places and people we hold dear.

By the Uffizi, another Dante statue holds court. Photographer Valeria Raniolo is capturing our March cover, an ingenious timelapse of never-ending passersby, like the trudging circles in the Inferno, in front of the nineteenth-century Carrara marble tribute by Paolo Emilio Demi. The half-hour of camera clicking has attracted the attention of the young army officers standing guard over the U-shaped corridor and its priceless possessions. “I wonder why Alighieri is spelled with two ‘l’s,” the soldier muses. “Maybe it’s a mistranslation from the Latin.” Any ideas?

This issue of The Florentine celebrates Florence’s Supreme Poet ahead of Dantedì on March 25, the date when Dante is believed to have started writing his ‘Divine Comedy’ and the date that the Italian government has dedicated to the writer as a symbol of Italian culture worldwide. For Eugenio Giani, president of the Tuscany Region, Dante is the “cultural father of all of Tuscany” as well as a “friend… a familiar presence even to those who haven’t studied literature”, while for Mayor of Florence, Dario Nardella, “Dante will be our most powerful driving force for rebirth”. (You can read these institutional greetings on page 12 in the magazine.)

For me, there’s something about the power of poetry and the timelessness of the Commedia that hits home in these pensive times. Getting lost in the terzine and cantiche is a rollercoaster of a read, an emotional experience and a journey to enlightenment during months of purely armchair travel. Or, as Tuscan butcher-poet Dario Cecchini, puts it, “it takes you away from everyday things, from thoughts, from everything”. (His interview’s on page 21 in this month’s issue.) Another way to experience Italy for restless readers is to tune into the new wave of aural entertainment that is currently emerging online as we offer a round-up of podcasts and Clubhouse chats. 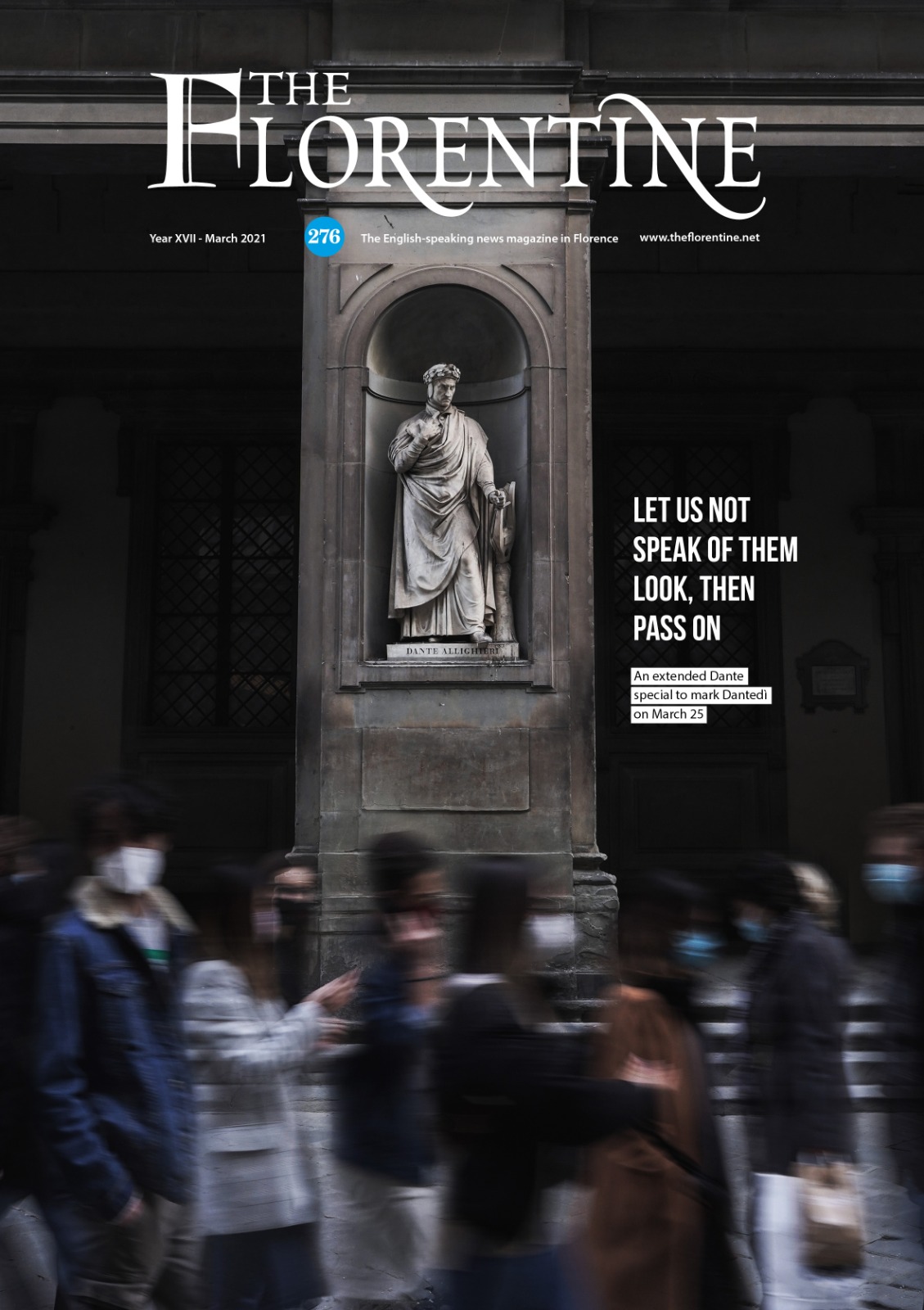 March 2021 cover of The Florentine.

What Dante and his fellow greats continue to spark is undying creativity. While the situation in Florence is dire—as I write these words, craftspeople are protesting in piazza dei Ciompi after a year’s loss of earnings, declaring that one out of four businesses are on the brink of shuttering indefinitely in 2021—some citizens are taking matters into their own capable hands. Luciano Leiva, a fourth-generation leather worker in the Oltrarno, and his wife, Tammara Hsiung, are taking action by founding a cultural association. Artisan Quarter is about to launch an online store to sell handcrafted products by San Frediano botteghe around the world, providing promotional support and organizing masterclasses to secure the future of Florentine arts and crafts. Get involved by contributing to the GoFundMe here. Equally active, The British Institute has undertaken an action research project over the last few months, which has now resulted in the Future of Florence Report. Director Simon Gammell shares his thoughts on what could become “world’s smallest—and most beautiful—zero-carbon global city” on page 8. 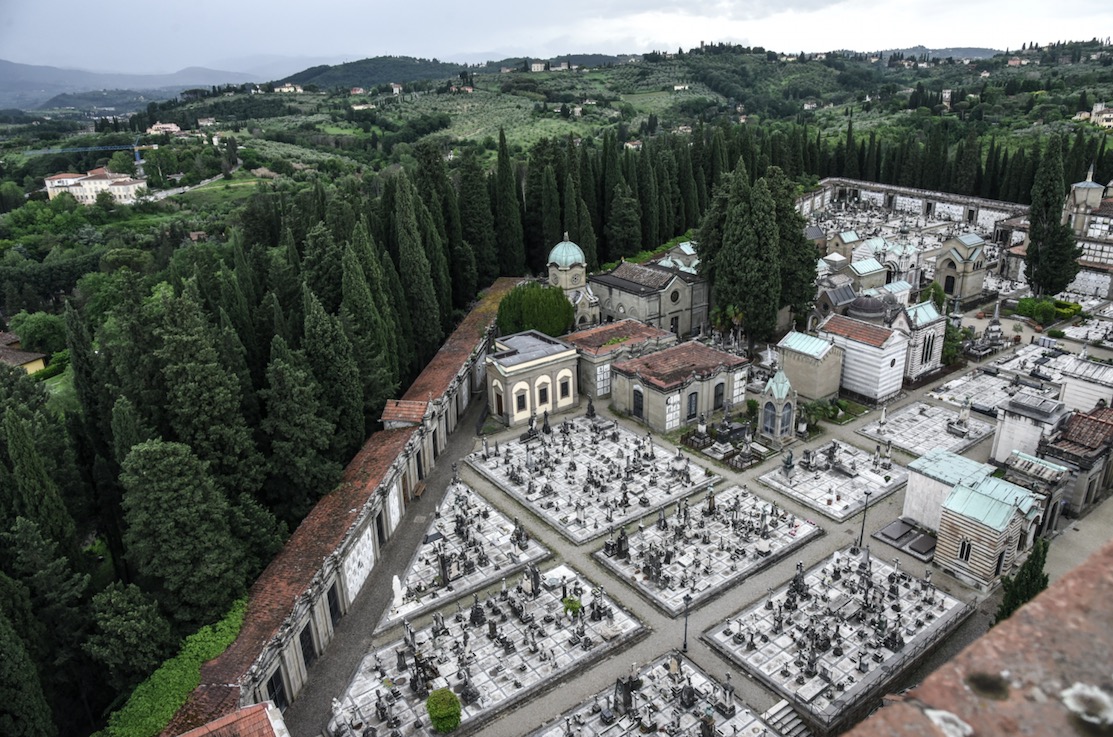 A bird’s-eye view of the San Miniato cemetery from the top of the bell tower / ph. @marcobadiani

In lieu of exhibitions to visit and events to attend, here’s my plug this month: ascend the steps to San Miniato al Monte (in your mind’s eye, if restrictions and geography fail to allow the real deal). For Dante, in Purgatory 12, the “the church that dominates the well-ruled city” was where “the dead seemed dead and the alive, alive” and was frequented by too few people (“This invitation’s answered by so few: / o humankind, born for the upward flight, / why are you driven back by wind so slight?”). As you climb the steps, the weight might well lift as it did for the Florentine poet, and the early spring view, scented with mimosa and magnolia blossom, will feel like a paradise-sent invigoration.

Now we ascended by the sacred stairs,
but I seemed to be much more light than I
had been, before, along the level terrace.

At this I asked: “Master, tell me, what heavy
weight has been lifted from me, so that I,
in going, notice almost no fatigue?”

Give the gift of information with a subscription to The Florentine. It’s a gift that keeps giving.

New for 2021: readers can now purchase single pdf issues (5 euro) of The Florentine without being obliged to subscribe for longer periods of time. Click here to buy the March 2021 issue.

What’s in the March issue of The Florentine 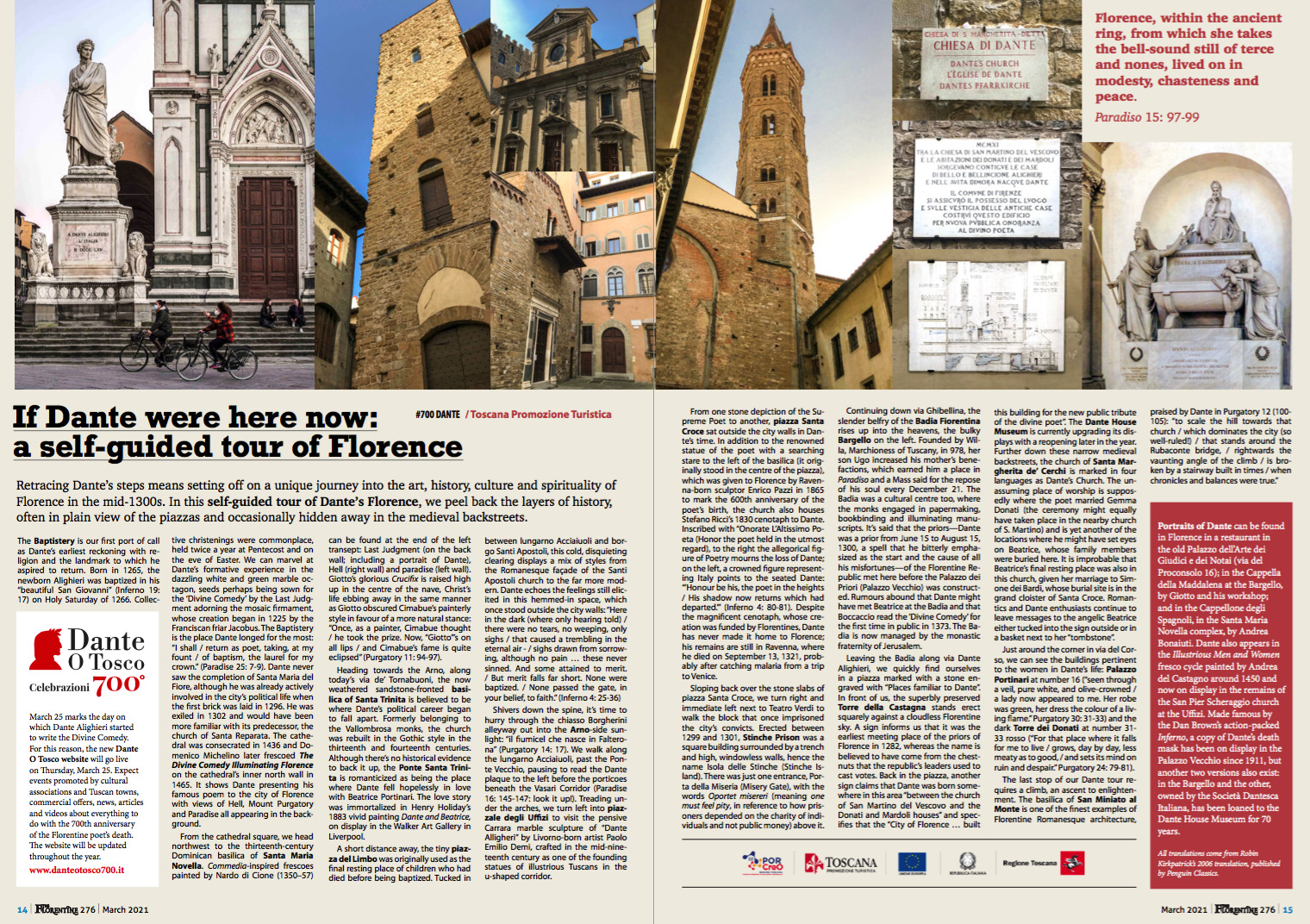 If Dante were here now: a self-guided tour of Florence (Helen Farrell for Toscana Promozione Turistica)

Conversations with Dante in our time (Christine Contrada) 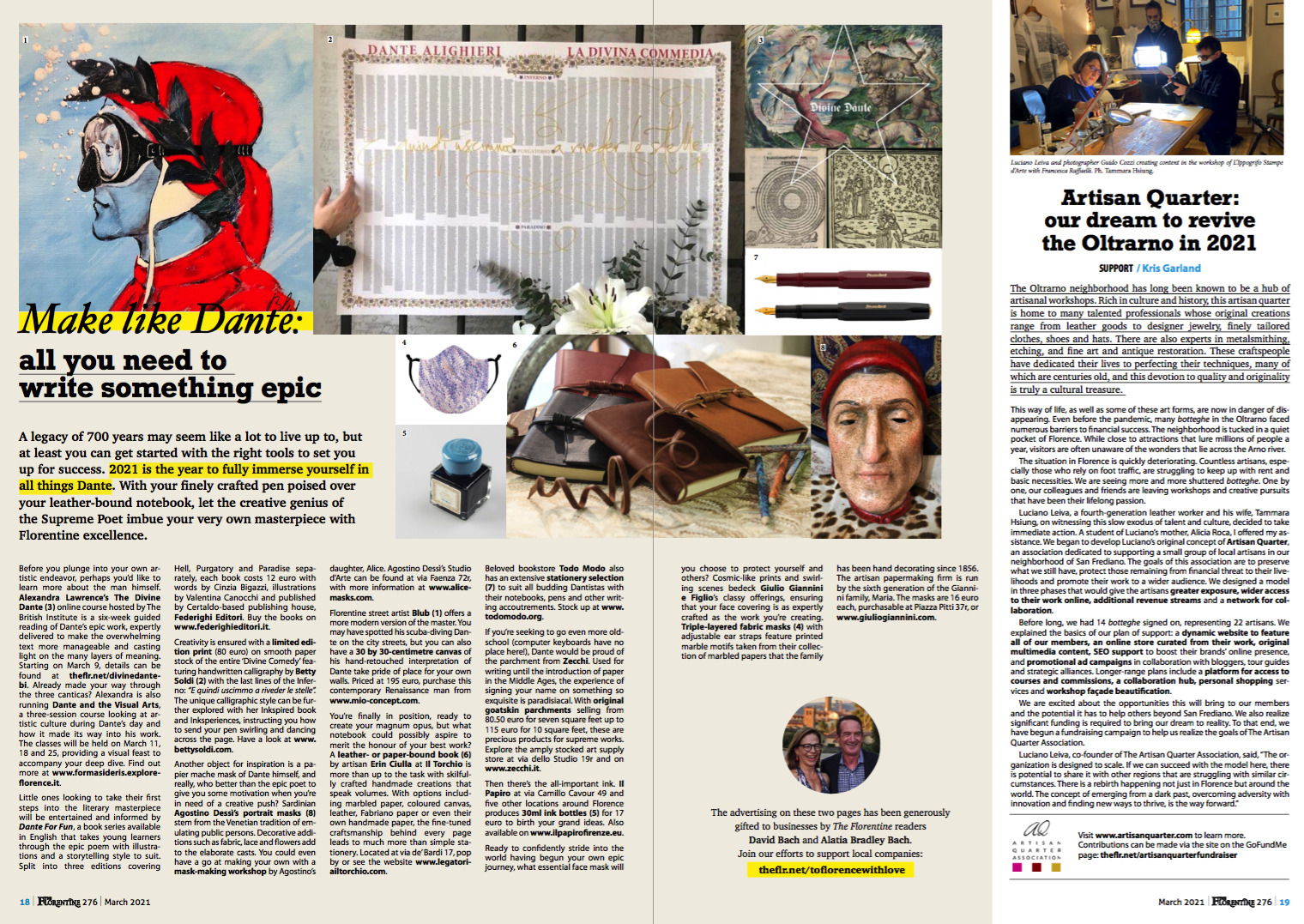 Make like Dante: all you need to write something epic (Jane Farrell, advertising for local businesses generously gifted by The Florentine readers David Bach and Alatia Bradley Bach)

Artisan Quarter: our dream to revive the Oltrarno in 2021 (Kris Garland)

Dante and the Lunigiana (Margreta Moss)

Dante and Dario Cecchini, the poet-butcher’s thoughts in 2021 (Marisa Garreffa)

Letter to the editor: About Brexit (Ann Alexander)

Talk of the town: a new wave of podcasts (Jade Cheli) 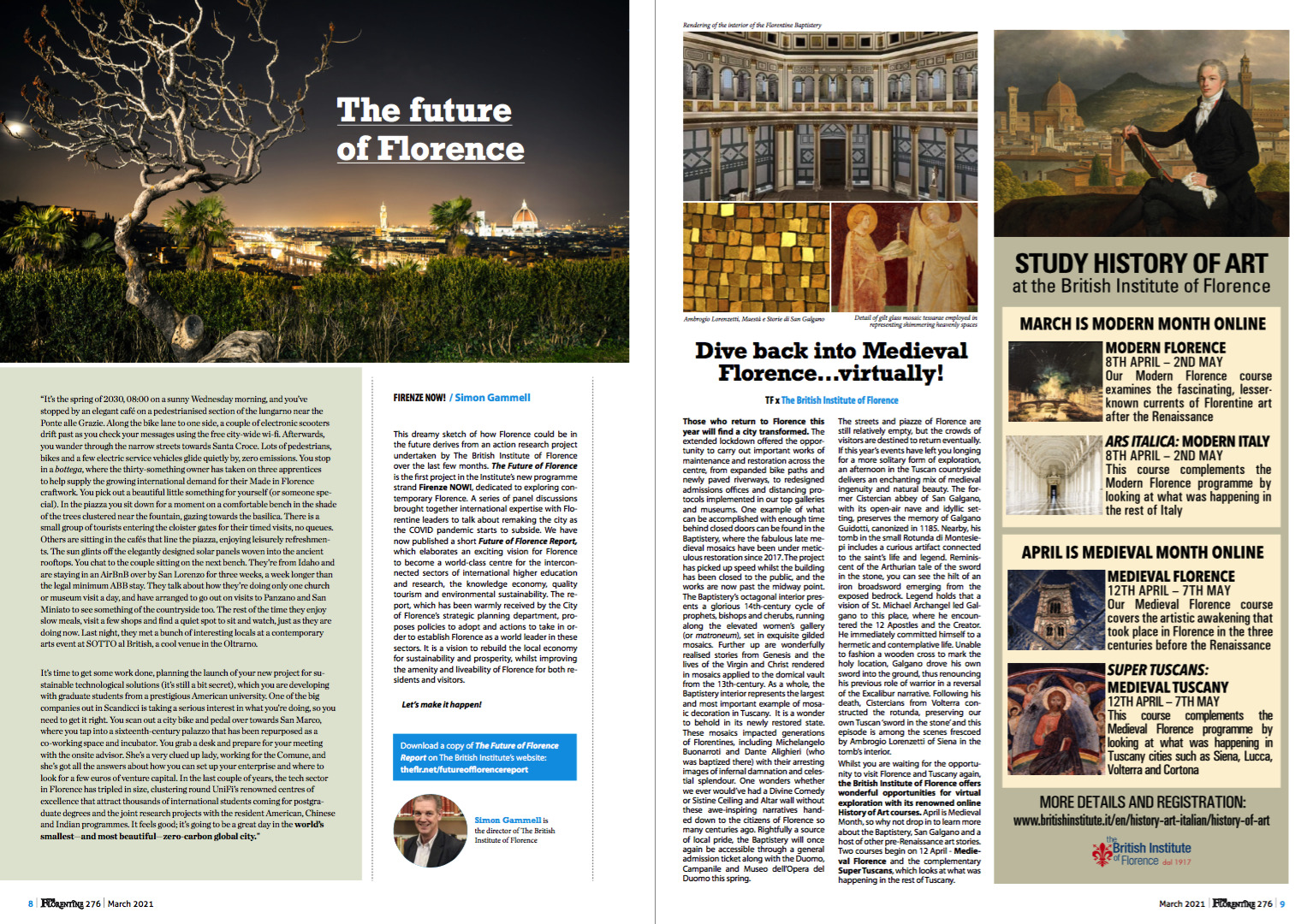 The future of Florence (Simon Gammell) 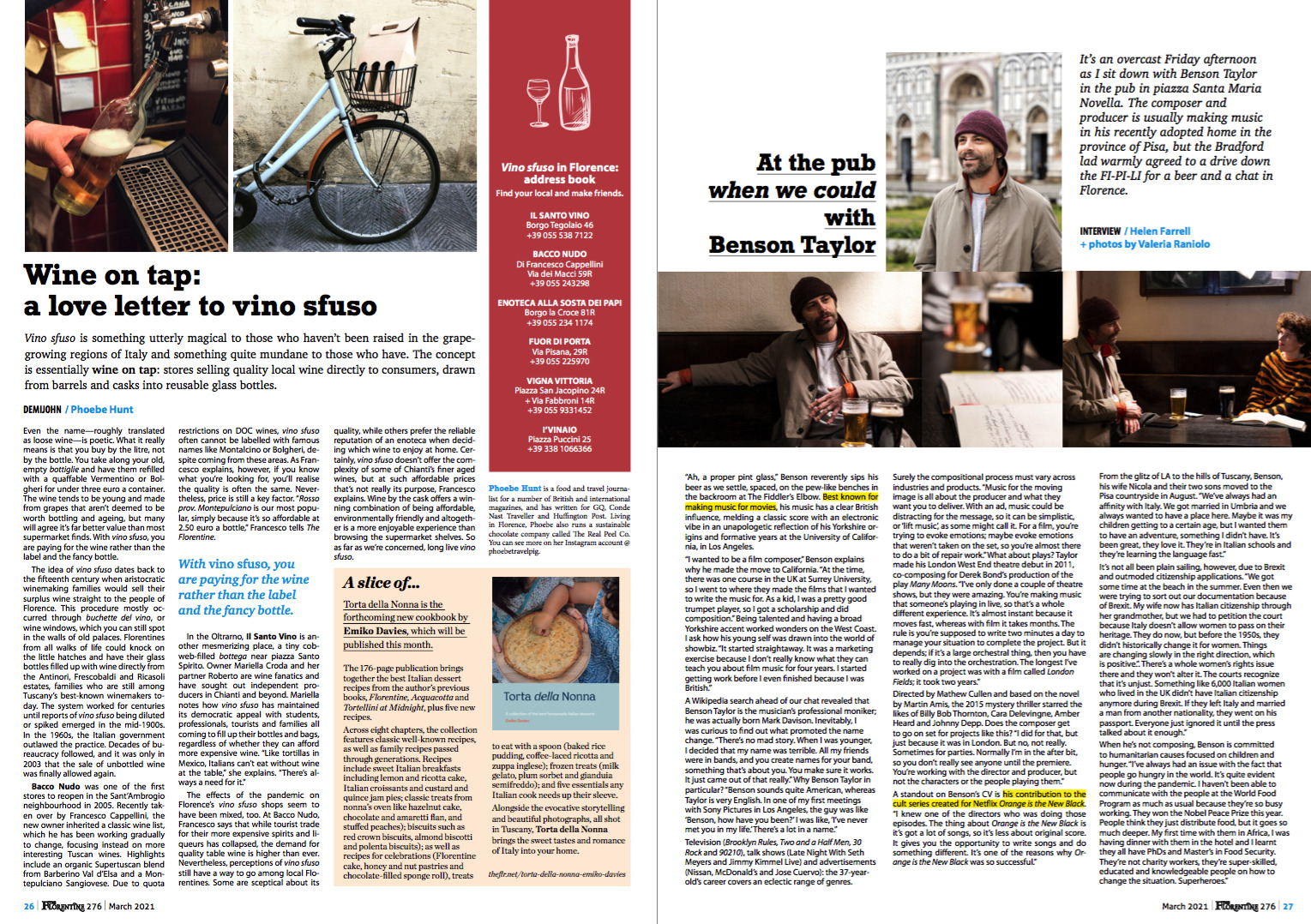 A slice of Torta della Nonna, a new cookbook by Emiko Davies

At the pub, when we could, with composer Benson Taylor (Helen Farrell)